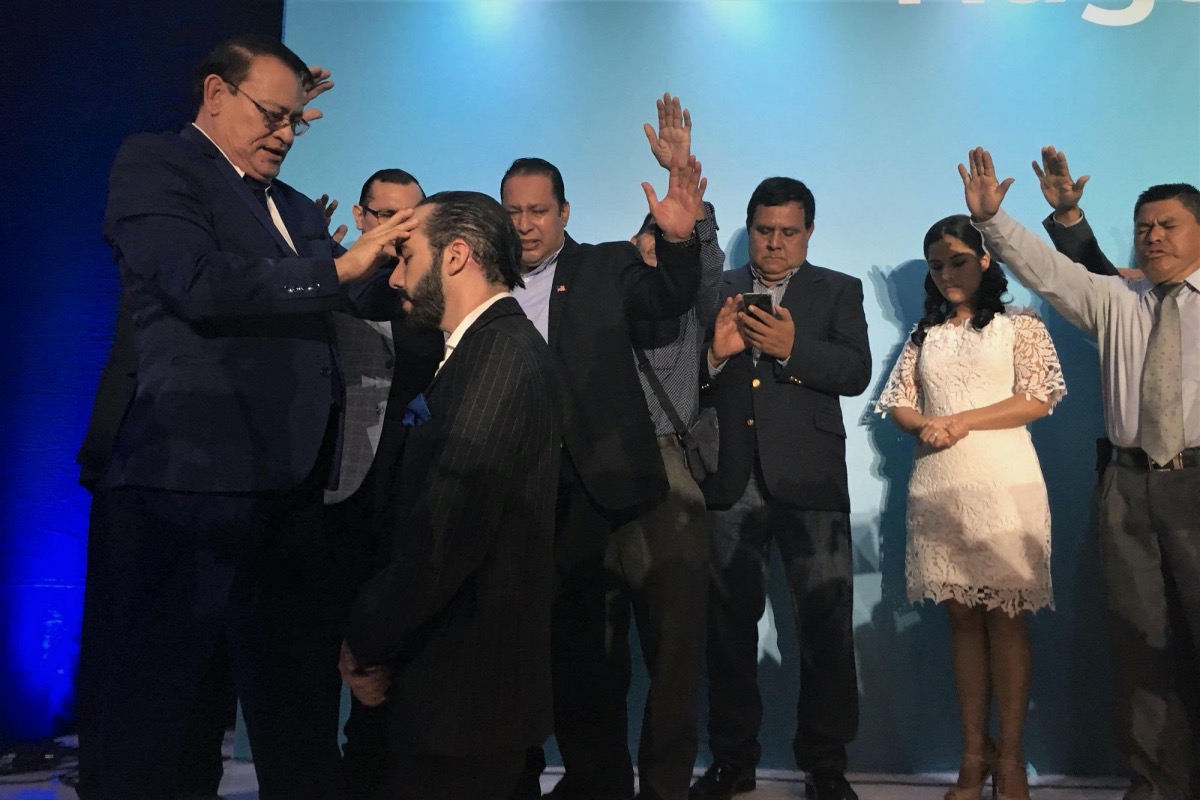 “You’re the man that God has sought for this country,” Pastor Romel Guadrón of Iglesia Espíritu de Vida told presidential candidate Nayib Bukele on December 8, 2018. “Believe me that I haven’t annointed anyone else. This time is different; I felt it in my heart.” (Arysbell Arismendi/El Faro)

Central America, in Brief: Presidents and lawmakers in Guatemala and El Salvador have pivoted toward religious rhetoric and policymaking in response to increased public scrutiny. The Salvadoran legislature cited the Bible while striking down a partial decriminalization of abortion this week, following the footsteps of Ortega’s alliance with conservative Nicaraguan churches since returning to power in 2007. The phenomenon may also spread to Costa Rica, set to hold presidential elections in February.

This week in Guatemala, legislators chose a new president of Congress, Shirley Rivera, a backer of proposals to curb the self-determination rights of trans children and teens and to promote “religious freedom,” has also supported some of President Alejandro Giammattei’s controversial policies, including the state of emergency amid mass calls for his resignation.

In her acceptance speech, she quoted a passage from the Bible urging citizens to submit to their government. “In Guatemala, the majority of the population is Christian and we have put our faith in God,” she said. “When we respect our leaders, we are respecting God, who puts kings in their place and removes them.”

Giammattei has also recently appealed to Guatemalans’ faith. In July, he promised to pass the religious freedom law to enshrine “respect for life-from-conception and family” in government institutions. “We’re a country of faith,” he said in a video statement. His predecessor, Jimmy Morales, also sought alliances with evangelical groups in the U.S. and Guatemala to shield himself from the fallout of corruption scandals.

In 2019, an investigation by the Latin American Center of Journalism Investigations (CLIP), in which El Faro participated, revealed that powerful evangelical leaders linked to Trump’s White House were expanding their political influence in Latin America.

The Catholic Church has historically been the most important religious institution in Latin America, and about 90 percent of the region identified as Catholic up until the 1960s. But other forms of Christianity, some of which promote hardline and unwavering anti-abortion policies, have been growing rapidly since the 1980s. In El Salvador, Honduras, Nicaragua, and Guatemala, between 36 to 41 percent of the population identify as Protestant, the most in Latin America, according to a 2014 Pew Research Center report.

Historian Carlos Malamud identifies a few key factors contributing to the rise in Protestants, including the Catholic Church’s alignment with political and economic elites, the social and spiritual distance from the region’s most marginalized communities, and repression against the liberation theology movement within and outside the Catholic Church. This disenchantment helped open the door for increased religious competition in Central America from Evangelical, Mormon, Jehovah’s Witness, and other predominantly U.S.-based branches of Christianity.

Fascinated by the rise of evangelical Christianity in Latin America.

Am I in Venezuela or a US mega church right now? Because I’m not sure. pic.twitter.com/P7sb1YcNh6

Many Central Americans have also been drawn to the “gospel of prosperity,” the idea preached by some Evangelical and other Christian churches that wealth will come to those who follow God. The message of these churches has struck a chord in the context of growing disenchantment with traditional political elites, writes Malamud in an article for the Spanish think tank Elcano Royal Institute.

In the 1990s, transitions to democracy after armed conflicts tried to reduce the influence of religion on Central American politics, echoing global trends. Yet, the increase in Protestantism has still affected politics in the region and propelled policies to restrict access to abortion, promote “family values,” or limit LGBT rights that appease a powerful part of the electoral base.

El Salvador, Nicaragua, and Honduras are among the 16 countries in the world to ban abortion under all circumstances. Guatemala only allows abortion when the pregnancy poses a risk to the expecting mother’s life.

This week, the Nuevas Ideas-controlled Congress rejected a new proposal to partially decriminalize abortion in El Salvador when the mother’s life is at risk, in the case of rape, and when the fetus has no chance of survival. El Salvador enacted its total abortion ban in 1998.

The rejection contradicts Bukele’s previous stance on El Salvador’s total abortion ban. In 2013, as mayor of Nuevo Cuscatlán for the left-wing FMLN party, Bukele criticized “defenders of life” who opposed a life-saving abortion for a Salvadoran woman named Beatriz, and accused them of “fanaticism.” The recent reform was named for Beatriz after the 2013 case.

But in September, facing mounting pressure because of the Bitcoin Law, a crackdown on judges, and controversial constitutional reforms, Bukele wrote on Facebook that he did not support legalizing abortion in any case. A previous draft of constitutional reforms included language that would have potentially opened the door to decriminalize abortion and protect LGBT rights, but the passages were removed.

“I’ve decided, so that there is NO DOUBT, TO NOT PROPOSE ANY TYPE OF REFORM to ANY ARTICLE that has to do with the RIGHT TO LIFE (from the moment of conception), marriage (maintaining only its original design, A MAN AND A WOMAN), or euthanasia,” he wrote.

Since winning the presidency, Bukele has entered into a relationship of “political convenience” with certain Evangelical leaders, according to Salvadoran feminist activist Morena Herrera. “It’s a process of mutual utilization. The pastors use him, but he also uses them,” she told El Faro English. Bukele drums up his voter base or redirects attention away from his corruption cases and weaker proposals. Pastors push their conservative agenda against abortion and LGBT rights.

In May, when new legislators took office in El Salvador, one of their first actions was to dismiss two proposals protecting LGBT+ and women’s rights. “As the new government consolidates its authority, those of us who belong to disadvantaged populations will suffer more violence and more discrimination, and will be left without a state to protect us,” wrote trans rights activist Bianka Rodríguez in El Faro.

In July, Nuevas Ideas and allied legislators approved a reform to include the phrase “Placing our faith in God” in rooms in the Legislative Assembly building. A week before, Salvadoran First Lady Gabriela de Bukele announced a proposal for the “Born with Care” law to improve health care for newborn babies and mothers. The language echoed conservative rhetoric about united families in a country where more than 140 women have been imprisoned for abortion-related crimes since 1998.

In the face of protests and upcoming elections, other Central American leaders have also doubled down on their religious rhetoric.

In Honduras, as November 28 elections approach, the ruling National Party of President Juan Orlando Hernández has ramped up its religious rhetoric against leading opposition candidate Xiomara Castro, who has said she would decriminalize abortion.

“We declare ourselves absolutely against abortion and all of the bad Hondurans who want to promote a perverse agenda and try to convert our country into a land covered in the blood of innocent babies,” the party wrote in a September statement.

The National Party, which has ruled Honduras since a 2009 coup, is hoping to overcome major corruption scandals to put Tegucigalpa mayor Nasry “Tito” Asfura in the presidential office in the November elections. Castro is now the main challenger after she joined her ticket with another opposition candidate, Salvador Nasralla.

A last-minute political alliance in #Honduras has shifted the pre-election scene to open the possibility of the first-ever victory of a left-wing party in November. #efNewsletter via @ElFaroEnglish https://t.co/CsMyNyLOe4

In January, the Honduran Congress —led by the National Party— approved amendments to the constitution that make it nearly impossible for the country to loosen its bans on abortion and same-sex marriage.

In Nicaragua, catering to conservative religious interests has helped President Daniel Ortega maintain his grip on power. Ortega’s shift from atheist during the 1980s and 1990s towards portraying himself as a devout Christian helped buoy him to the presidency in 2007. Since then, he has increased his religious rhetoric: In 2016 he ran on the slogan, “Christian, socialist, solidarity.”

Following the 2018 protest movement, the Ortega family turned to the Evangelical church to rehabilitate its image. “It’s a game where the only thing that is clear is that they don’t have principles or ideology,” lawyer and former Nicaraguan congressman Eliseo Núñez told Nicaraguan outlet La Prensa in 2019. “Their objective is to remain in power.”

Even in Costa Rica, which in 2018 became the first country in Central America to legalize same-sex marriage, conservative religious groups may mount a competitive candidate in presidential elections on February 6. In 2018, the backlash from conservative religious groups against an Inter-American Court ruling ordering Costa Rica to legalize same-sex marriage nearly propelled Evangelical pastor Fabricio Alvarado to the presidency.

His popular candidacy also sparked fierce resistance, including from women who dressed in red robes in allusion to the TV show The Handmaid’s Tale, where fertile women live enslaved in a modern-day patriarchal regime. Former labor minister Carlos Alvarado Quesada, who campaigned in favor of complying with the international court ruling, ultimately took the presidency.