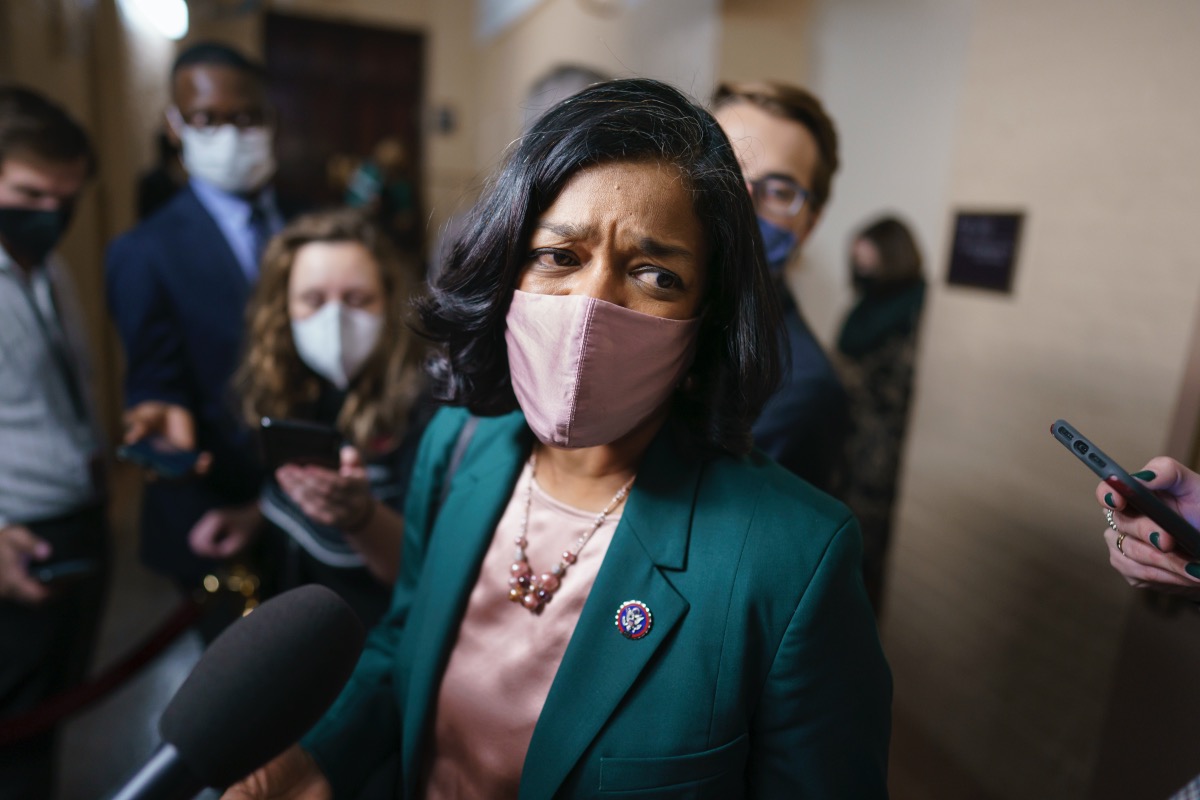 WASHINGTON, D.C. — The full-throated support Rep. Pramila Jayapal (D-WA) once gave to a citizenship pathway for immigrants in the budget bill has begun to fade from her public statements in recent days.

Last week the Congressional Progressive Caucus Chair spoke at length with reporters of her “four priorities in the care bucket” for the Build Back Better Act, leaving off the fifth priority listed by her caucus back in April: a pathway to citizenship.

In a press scrum on Monday, October 25, which lasted for just over eight minutes, Rep. Jayapal did not mention immigration.

In a scrum with reporters yesterday evening @PramilaJayapal spoke at length of four main pillars of negotiating priorities for the Progressive Caucus in BBB. Immigration was not mentioned, a change from previous weeks. Will try and find Jayapal again today. https://t.co/7rDRH3q0Cs

At House votes on Tuesday, October 26, Latino Rebels asked Congressional Progressive Caucus Whip Ilhan Omar (D-MN) if including immigrant relief in the bill was still a priority for progressives. “Yes,” replied Omar. “One of the five.”

In April, Progressive Caucus members announced their five official priorities for the budget bill, positioning a “Roadmap for Citizenship and Inclusion for Immigrant Communities” at fifth on their list.

Priorities are short of ultimatums in the parlance of legislative negotiations on Capitol Hill, acting as the goalposts that caucuses use to establish the parameters in legislative debates.

“I have brought it (immigrant relief) up to the President multiple times,” Jayapal told MSNBC host Andrea Mitchell during an interview on Monday. “What we have come to is that if there are senators who will not overrule the Parliamentarian, then— I don’t think that it’s going to be possible to put it in.”

.@RepJayapal: "…and I have brought it up to the President multiple times, and what we have come to is that if there are senators who will not overrule the parliamentarian, then – I don't think that it's going to be possible to put it in." (2/8)

The Progressive Caucus chair’s remarks echo those made by conservative Sen. Joe Manchin (D-WV), the bill’s primary antagonist within the Democratic Caucus. Manchin has told reporters multiple occasions over the last month that he thinks immigrant relief does not fit into the budget bill and would be unwilling to overrule the Senate Parliamentarian to include a citizenship pathway if the bill reaches the floor of the Senate for a vote.

“Immigration does not mean to Jayapal what it means to Omar or [Rep. Alexandria Ocasio-Cortez (D-NY)],” a senior House aide told Latino Rebels last week on the condition of anonymity. “It looks like she’s trying to kill the relief proposals at her earliest convenience just to get it over with, which is sad and probably premature.”

“Immigrant communities and their supporters are watching carefully, to see who in congress is really looking after our communities or if everything promised was just campaign rhetoric," said @MCastroAction of @NICE4Workers on Rep. Jayapal blinking on immigration reform (1/2)

On Monday evening, Jayapal was again asked by reporters about her caucus’ priority to include a pathway to citizenship in the budget bill. “I believe that we’re getting to a resolution on that,” said Jayapal. “We need to keep all options on the table for immigration.”

Jayapal told reporters that she would be okay with changes in the Senate version of the bill coming back to the House based on the Parliamentarian’s review.

“There are going to be changes,” said Jayapal. “There will be things that have to be corrected and scrubbed and all of that because of the Parliamentarian. That is the way it would work anyway.”

Asked by reporters if House progressives are waiting on additional immigration guidance from Senate Parliamentarian before proceeding with House votes on the budget bill, Jayapal did not waffle.