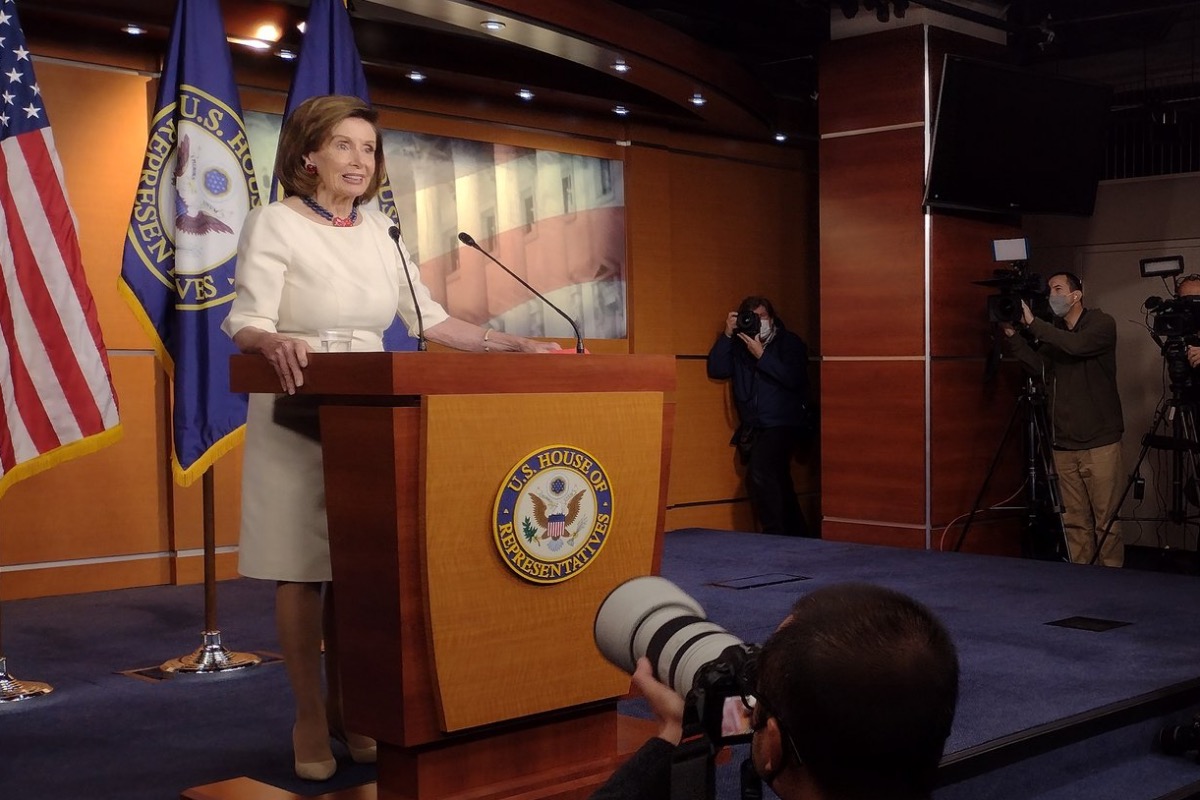 WASHINGTON, D.C. — Generations of Democratic candidates on the campaign trail have promised a pathway to citizenship to immigrants, and all failed to deliver once seated on Capitol Hill.

Likewise, generations of immigrant rights advocates have demanded a pathway to citizenship from Congress since President Ronald Reagan passed the last amnesty in 1986. All have come up short.

The hours-long meeting with Pelosi was the second for the three Hispanic Caucus Congressmen, dubbed the “three amigos” in a Univision segment that ran nationally on the nightly news.

At issue in both meetings were the immigration sticking points the three Congressmen were pushing to be included in a manager’s amendment of the Build Back Better Act (BBB), published days before by the Rules Committee in the lower chamber.

Several options were on the table at the beginning of last week, according to Hill aides involved in immigration negotiations who spoke with Latino Rebels under the condition of anonymity. But in the end, it came down to a decision over two: registry or parole.

Registry creates a pathway to citizenship by moving the current Green Card eligibility date forward from 1972 to 2010.

Immigrant parole does not create a pathway to citizenship, offering instead temporary permission to live, work, and travel to and from the United States for immigrants who qualify.

Pelosi pushed for registry until the very end, according to four sources involved in the negotiations last week. So did Senate Majority Whip Dick Durbin (D-IL), who leads the immigrant relief charge for Democrats in the upper chamber. Even moderate Rep. Josh Gotheimmer (D-NJ) expressed his conditional support for the registry option in the final hours of negotiations.

Yet the three amigos somehow emerged from the meeting with a mixed message, telling reporters they would be submitting a new relief text for the bill to leadership, a claim Garcia rolled back hours later on Twitter.

Met with Speaker Pelosi tonight. All options remain on the table, but we are not drafting new language for BBB. Speaker Pelosi shares our concerns for the immigrant community, recognizes their contributions and is committed to keeping immigration in play.

“We are not drafting new language for BBB,” said Garcia in a tweet that bewildered Hill staffers who had been involved in immigrant relief negotiations for months with Democratic members of Congress and outside advocacy groups.

Speaker Pelosi and the House Democratic Caucus advanced BBB the following night in a floor vote that went into the early morning hours and did not contain a pathway to citizenship. Over the weekend, Democrats and some immigrant rights advocates touted parole on the political airwaves.

We Are Home Coalition

“It’s what the groups wanted,” said one visibly frustrated House Hispanic Caucus member when asked by Latino Rebels why parole had won out over citizenship during Thursday night negotiations with Pelosi.

Asked to clarify the member’s comment over the weekend, a senior aide identified the groups as a steering committee of 22 organizations within the We Are Home coalition, a diverse block of grasstops and grassroots immigrant rights organizations chosen by Congressional Democrats to be the lead negotiators for immigrant relief since July, when Senate Budget Committee Democrats announced the first framework for BBB.

“We knew early on the entire process would lose legitimacy if we got this part wrong,” a senior Senate aide told reporters on background in September. “We knew we had to include some of the more established groups in [the immigration rights] space, but at the same time made sure to include some of the smaller groups who came highly recommended from within the coalition and among our staff.”

Fwd.us, UnidosUS, SEIU, and the United Farm Workers are heavyweight brands in immigrant rights, a highly-contentious, third-rail policy issue in the Beltway. Immigration Hub has the deepest reach in federal affairs, with a staff of former Hill aides and former executive director Tyler Moran now serving as a special assistant to the President for immigration on the Domestic Policy Council.

Grassroots immigrant rights organizations like CASA Maryland, Nakasec, CHIRLA, and UndocuBlack Network are We Are Home’s mobilizing infrastructure. Advocates at membership-based organizations say they are more accountable directly to undocumented immigrants who would be impacted by policy changes.

“Access does not equal power,” said Lorella Praeli, co-president of Community Change, one of the organizations on the We Are Home steering committee. “It does not matter how many meetings you’re having or conversations you’re having if you are not willing to push and to hold people accountable.”

They cannot serve as Hill aides or, in some cases, even visit the White House. There is no newsroom for the undocumented in Washington, further limiting the access millions of immigrants have to the inner workings of the legislative process in Congress that remains for most their only hope of U.S. citizenship.

All nine undocumented immigrant policy organizers who replied to press inquiries preferred that their names not be used in this story for fear of losing the little access they have in Congress and the White House.

“I see a lot of people who are U.S. citizens touting parole,” said an undocumented organizer in California, “and I keep on asking the question: Who was in the room who okayed this? Was this being decided about us without us? We did not ask for parole.”

“Friday got heated,” said an undocumented organizer from the Midwest of their weekly meeting with Senate leadership aides. “They asked us what they can do differently in the meeting, but afterwards some of the [We Are Home] steering committee members told us we don’t have buy-in for citizenship, which made no sense because the registry was in the [House BBB] text when the White House announced the framework.”

The Washington Post reported that registry would be a “placeholder” in the text while the Senate Parliamentarian advised on parole… And there it was: the hard-fought pathway to citizenship holding on for dear life in a complex policy negotiation over trillions of dollars in proposed government spending.

Senior policy aides in the House and Senate told Latino Rebels they assumed the citizenship pathway would survive to the floor vote in the lower chamber, until a week later when, on November 3, the House Rules Committee published an updated bill text. Citizenship was out, replaced by parole.

Hill aides and advocates were bewildered by the news. Speaker Pelosi, Senator Durbin, the entire Hispanic caucus, and the Squad were demanding citizenship. Why was it gone from the bill text?

Rep. Pramila Jayapal (D-WA), chair of the House Progressive Caucus, was telling advocates as early as the first week of October that citizenship was definitely out of the bill, according to two senior House aides to Progressive Caucus members involved in immigration policy negotiations.

“We don’t know why she’s telling them that,” said a Hispanic Caucus member on background to Latino Rebels at the time. “Her caucus needs to be hearing the opposite.”

Jayapal, an immigrant from India, was invited to the White House to negotiate BBB, while Rep. Ilhan Omar (D-MN), her caucus whip, was not.

Rep. Alexandria Ocasio-Cortez (D-NY) and other Squad members expected to drive the Progressive Caucus message were never invited to closed-door meetings with President Biden, according to their aides.

On October 28, the White House announced a new framework for BBB that included a $100 billion topline for “immigration reform that is consistent with the Senate’s reconciliation rules.”

Within hours, the House Rules Committee published the first draft of a long-awaited bill text. The Post was right: Registry was in, perhaps as a placeholder, perhaps not. For six days it remained in the bill text, until it was replaced with immigrant parole in the second draft published by the Rules Committee.

“I have brought it up to the President multiple times,” Jayapal told MSNBC’s Andrea Mitchell, “and what we have come to is that if there are senators who will not overrule the parliamentarian, then I don’t think that it’s going to be possible to put it in.”

.@RepJayapal: "I think I was working on trying to get agreement on that to overrule the parliamentarian. But at this point, what I believe is that we should vote on the things that the parliamentarian is likely to include." (3/8)

Progressive aides in both chambers were dumbfounded by Jayapal’s interview. Even if it were true, as some aides believed, that a pathway to citizenship was dead in the water for BBB, why would the Progressive Caucus Chair make herself the messenger of the bad news? Why not make the moderate Democrats outside of her caucus take the wrap for obstructing reform?

That was Monday. By Wednesday, registry was out, immigrant parole was in. Senate aides now say passing parole in the House doesn’t make it any easier to pass a registry in the upper chamber.

BBB negotiations continue in the House, with representatives expected back on Capitol Hill on Monday, November 15.