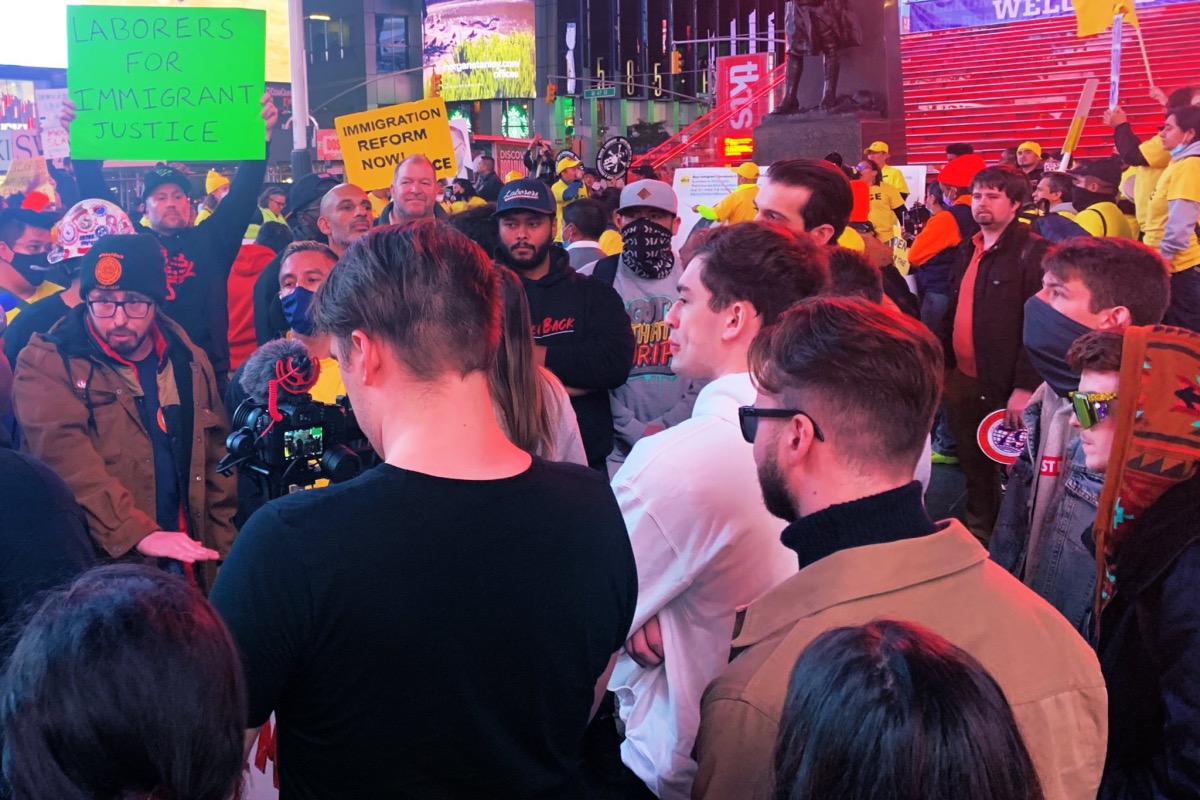 “What they do is put their camera in your face and demand to know your name. Then they post it online and tell their followers to ID you so you can be reported to ICE,” said an undocumented organizer with National Immigrant Community Empowerment (NICE) who witnessed the confrontation.

Instead of undocumented immigrants to bully, however, the small group of alt-right instigators who showed up suddenly found themselves facing a wall of building and construction unionists from Local 79.

Union laborers will always join in solidarity with @NICE4Workers to stand up for democracy and against fascism. https://t.co/Hkl5QfR4VQ

“They were there to agitate,” said Christina Culpepper, president of the women’s committee of Local 79. “But unionist, who are not a separate community from immigrants, weren’t going to back down.”

Videos on Twitter show unionists confronting the four or five instigators, one of whom is identified as Nick Fuentes, a 23-year-old alt-right media operative who took part in the Capitol insurrectionist on January 6 and was banned from several social media platforms including Facebook, Instagram, TikTok, Clubhouse, and most recently Twitter, along with business services PayPal, Venmo, Patreon, Airbnb, Shopify, and others.

NICE and Local 79 members confirm that the confrontation occurred at about 7 p.m. Eastern Time.

“They showed up to intimidate the undocumented people present,” said another unionist who witnessed the confrontation. “But we were prepared to take it to another level if that’s how it went down.”

“We sent their racist asses back on the L train,” added the unionist, referring to the 24-hour subway line in New York City that runs between Manhattan and Brooklyn.

“Our brothers and sisters from the Laborers stood with us in solidarity at our path for citizenship rally on Tuesday, and also confronted the alt-right nationalist that tried to disrupt us,” Manny Castro, executive director of NICE. “This is a result of many years of building relationships together and the recognition that when immigrant workers and union workers come together, we win.”

Organizers with NICE tell Latino Rebels that the 11-day TImes Square protest will culminate Friday in an 11-mile march from Midtown Manhattan to the home of Senate Majority Leader Charles Schumer (D-NY) in Park Slope, Brooklyn.