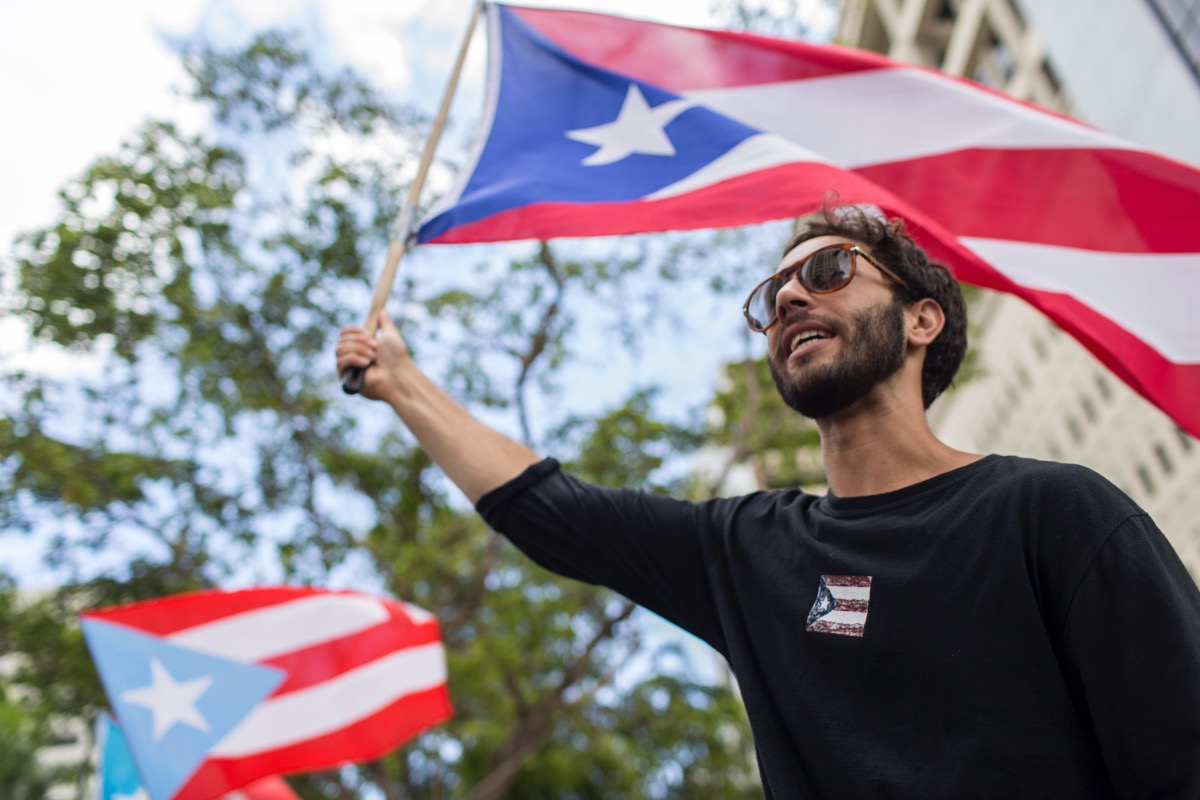 It was showtime in La Habana. The Tropicana nightclub premiered its first promotional flight from Miami on Cubana de Aviación. All aboard were singing the airline’s slogan: “Viajar en Cubana de Aviación ¡Qué emoción!” The flight, during which showgirls danced in the aisles dressed in gold and silver lamé, was touted as a “Cabaret in the Sky.” It catered to a decadent jet set that saw the island as their playground and the Tropicana as their paradise under the stars.

Cuba in the 1950s was where gangsters, Hollywood stars, and revolutionaries mingled. While Fidel Castro, the high priest of the Revolution, organized his rebels in the Sierra Maestra, Nat King Cole, Liberace, Joan Crawford, Marlon Brando, Ernest Hemingway and mob boss Meyer Lansky partied hard in the Cuban capital.

The Cuban bourgeoisie basked in the nearness of Hollywood and profited from the corruption of the U.S.-backed dictator Fulgencio Batista. Although rumors were rife that Castro’s men were close —the bombings and visceral popular discontent should have clued them in— and that Batista and his family had secured visas to the United States, the elite believed the Revolution could not touch them.

In the early hours of January 1, 1959, when most well-heeled Cubans and American ex-pats were still dancing to the tune of Benny Moré, “el Bárbaro del Ritmo,” a plane flew low over the posh Vedado neighborhood in Havana. It was carrying Batista and his entourage, heading toward the Dominican Republic and the safety of exile.

The Cuban upper class soon packed their belongings too, as the Revolution was as much a reaction against U.S. influence in Cuba as well as the corrupt rule of the elites.

And here is where the two wings of that same bird meet, many years later.

As Rodríguez de Tió wrote, Cuba and Puerto Rico are two islands of the Hispanic Caribbean that share a history of Spanish colonization, Afro-Antillean identity, and the struggle against the “manifest destiny” of the United States, that quaint 19th-century creed which states that U.S. expansion throughout the American continents is both justified and inevitable.

History has a way of repeating itself, and in many ways Batista’s Cuba is echoed in today’s Puerto Rico.

Puerto Rico is now a fiscal paradise for the rich and famous, courtesy of the ruling pro-statehood New Progressive Party (PNP in Spanish) and its gentrification of the islands, selling Puerto Rico by the cuerda.

In 2012, under PNP Governor Luis Fortuño, the islands adopted Act 22, which exempts most investment income of new residents from local taxes. All affluent Americans and other foreigners have to do is establish a principal residence in Puerto Rico and spend half a year there.

Nifty, right? Rich newcomers pay no taxes while Puerto Ricans can barely make ends meet. The daily existence of the average Boricua —not the elite who live in the posh Guaynabo neighborhood or the seaside villas of Dorado— is one many compare to the vicissitudes of present-day Cuba.

The islands have still not recovered from the worst economic and fiscal crisis in their history, brought on by a massive $70 billion debt that led to the imposition of a fiscal control board, known as “la Junta,” and a looming budget gap of more than $20 billion. In addition, an unemployment rate of more than 12 percent has fueled a population decline that exceeds the 1950s exodus, stripping the islands of their human capital. A Puerto Rico without Puerto Ricans—the PNP’s wet dream.

In 2017, hurricanes Irma and María leveled Puerto Rico, plunging the islands into darkness and causing the deaths of almost 3,000 Puerto Ricans. The islands’ residents and the Boricua diaspora remember the event as if it happened only yesterday. María alone inflicted an estimated $90 billion in damage, for which Congress allocated only $42.5 billion in disaster relief. The Trump administration allocated a mere $26 billion of that money, much of it yet to be disbursed today.

Two months after #HurricaneMaria hit #PuertoRico, San Juan Mayor @CarmenYulinCruz has a message for @realDonaldTrump and the US Congress. #MariaPR pic.twitter.com/NXljsqw4JW

María laid bare an island with crumbling infrastructure, an electrical grid in severe disrepair, veiled poverty, and a two-party political system that had looted the islands and their people for decades, leaving Puerto Ricans mired in debt and despair.

So what does the PNP cúpula do?

A little more than five months ago, the current PNP governor, Pedro Pierluisi, privatized the electric power company and granted the responsibility for the distribution and transmission of power in Puerto Rico to LUMA, a Canadian-American energy consortium. The islands now suffer long daily blackouts while LUMA executives rake in exorbitant salaries. And just last week, LUMA CEO Wayne Stensby was found in contempt of court for refusing to hand over documents that detail salaries and communications between executives and politicians.

After an arrest warrant was issued for LUMA CEO Wayne Stensby, the company finally gave legislators documents containing information about employee salaries and communications between Stensby and politicians. (Reporting by @Vaquero2XL)#PuertoRico https://t.co/K64SGH6Vie

Pierluisi, himself a former lawyer for the Junta, and company are also hard at work selling the islands as a fiscal paradise and the ultimate tourist fantasy, the Caribe Montecarlo, except a bit more low rent.

Instead of Johnny Weissmuller (of Tarzan fame) diving into the pool at the Hotel Nacional in Havana while Ava Gardner watches on, Puerto Rico has Logan Paul, crypto creep Brock Pierce, and discredited hedge fund billionaire John Paulson, who has invested billions in upper-class resorts such as the Condado Vanderbilt Hotel and St. Regis Bahia Beach Resort, among a cast of other unlikables.

You understand Puerto Ricans do not want more tax evading gentrifying Americans who come and play native? And that tax shelter you call a change of life, it’s not long for this world. Go elsewhere. Much obliged.

Pierluisi recently moved to waive taxes on luxury cars because tourists don’t want to see the old cars (“carros destartalados“) driven by locals. A new iteration of Fantasy Island is being shot on the archipelago —“De plane! De plane!”— and Puerto Rico will host the 2021 Miss World final on December 16, which will cost the people of Puerto Rico $7 million.

And the pièce de résistance: On New Year’s Eve, the islands will host Dick Clark’s New Year’s Rockin’ Eve, featuring Ryan Seacrest’s first Spanish-language countdown, to be held on the grounds of the Puerto Rico Convention Center and Distrito T-Mobile, the latter owned by, you got it, a PNP party favorite and friend of Pierluisi’s. Officials say the event will cost around $3.6 million and will be paid for with federal funds that could have gone to COVID relief.

It’s now showtime in San Juan. Let fate be tempted. And as American journalist Molly Ivins was fond of saying, let’s dispense with the “happy horseshit.”

Boricuas, especially the younger generations, realize that the irresponsibility, hubris, and corruption of the two-party political system, the PNP and the Popular Democratic Party (PPD in Spanish), an advocate of the islands’ current political status, are to blame for the mess the islands are in as much as the colonial status itself.

This is an entire generation whose experience has been defined by natural disasters, budget cuts, a fight for public higher learning, and a worldwide pandemic. It has lived through bungled federal responses to disasters, a never-ending recession, blackouts, earthquakes, and Washington’s barefaced contempt for the islands.

This generation will always remember how President Trump withheld aid after María, tossing paper towels at us and calling us “dirty and poor” while 3,000 of us died.

“La nueva cepa,” this new strain of Puerto Rican, seeks a resolution to the century-old colonial status. And while Puerto Ricans are not interested in becoming the 51st state, they do want self-determination.

Puerto Rico’s Statehood Movement Is on the Verge of Collapsing (OPINION), by Pedro Cabánhttps://t.co/9qL4jPyZzG

The dye has already been cast. The PNP won the last elections by a mere 32 percent and saw the rise of minority parties, effectively ending the two-party duopoly.

To be sure, these are different times. The once romantic perfume of the Cuban Revolution has turned acrid. I doubt we will see Pierluisi and his mates on a DC-9 on their way to the Dominican Republic or anywhere else. The hope is that the revolution will come by the ballot box and through the new social and political infrastructures being built by a new generation,  La Generación de Yo No Me Dejo.

That is the hope. And if not, there is always New Year’s Eve.