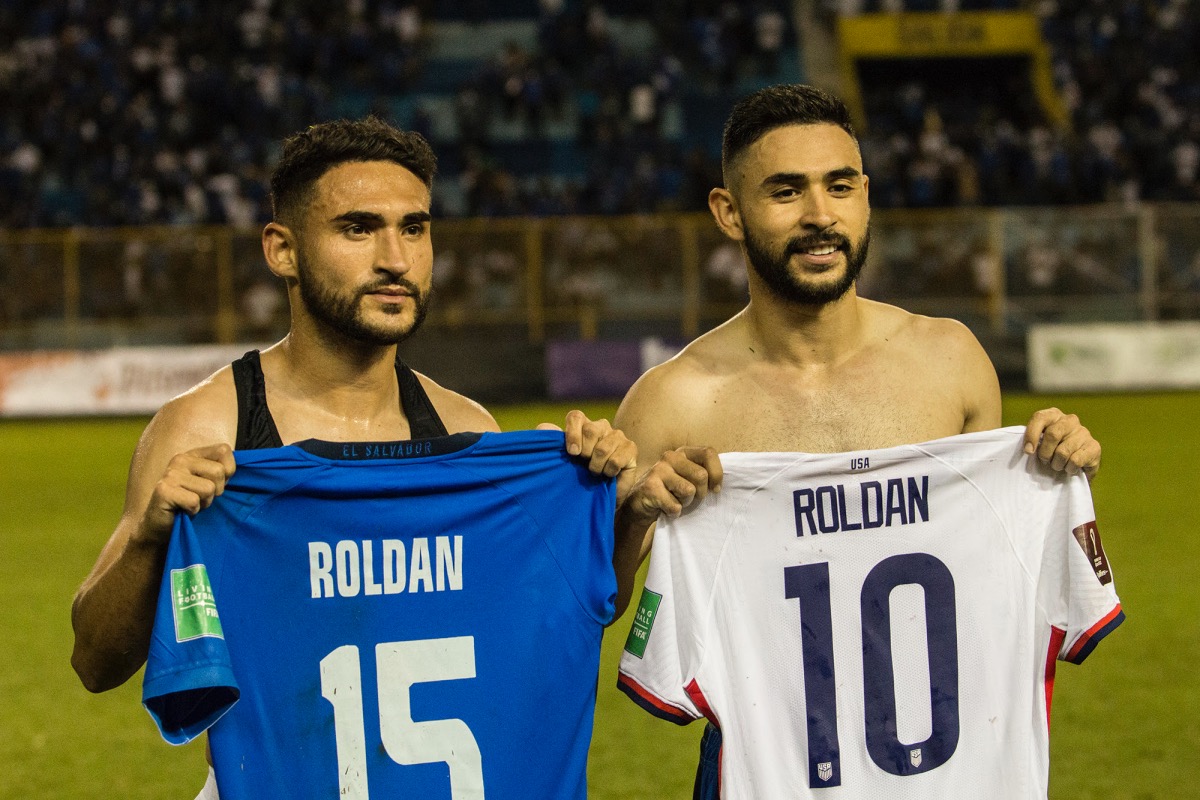 Brothers Cristian (left) and Alex Roldán exchange jerseys after facing off at Cuscatlán Stadium on September 2, 2021. Both were born in California to a Guatemalan father and Salvadoran mother, but Cristian plays for the United States and Alex for El Salvador. (Odir Arriola/El Faro)

On September 8, El Salvador’s men’s national team suited up for its World Cup qualifying match against Canada with five of the eleven starters born in the United States. Another one was born in the Netherlands.

“That El Salvador plays with a team consisting mostly of foreigners is the heritage of an unending diaspora and yet another episode in its complex relationship with the United States,” writes El Faro’s Nelson Rauda in a long-form feature portraying the team.

The group of twenty-somethings “spent the first half of 2021 memorizing the anthem. Unlike their fellow countrymen, they didn’t learn it as kids because they weren’t born in El Salvador. Some of them hadn’t even set foot in the country. Some don’t even speak Spanish,” the story reads.

During the second half of the 20th century, successive waves of migration, with varying undercurrents including economic incentives and the social and political violence of the civil war, caused the Salvadoran population in the United States to skyrocket from 16,000 in 1970 to upwards of 2.3 million today.

As that figure has climbed, Salvadoran soccer has served as an emotional gathering point for those living both in and far from the homeland. Once the undisputed best team in Central America, competing in the 1970 and 1982 World Cups, the “Selecta” has since struggled to compete with the region’s well-heeled, better-organized, and more populous powerhouses. But the meaning of the blue shirt remains.

The Roldán brothers embody the complexities of Salvadoran diaspora identity. Born in the L.A. suburb Pico Rivera to a Guatemalan father and a Salvadoran mother, the brothers play together on Major League Soccer’s Seattle Sounders F.C. But come international competition, Alex plays for El Salvador, while Cristian plays for the United States.

At the close of the last match between the two sides on September 2 in San Salvador, the two brothers exchanged jerseys.

El Salvador’s odds of qualifying for the 2022 World Cup are looking grim, as the country sits in the bottom half of a regional ranking board led by the United States, Mexico, and Canada. But the reinforcements of new players from the diaspora have boosted fans’ spirits.

“It’s a team that for four decades hasn’t managed to qualify for the World Cup,” writes El Faro’s Víctor Peña in a separate photo essay documenting the players’ lives and the fans who raucously travel around the United States to cheer them on, win or lose—even if, more often than not, it’s the latter.

In El Salvador, this national soccer team, he adds, “continues to patch together the dreams of those who stayed, those who left, those who want to leave, and those who, at the invitation to suit up in the La Selecta blue, come home for the first time.”

The personal histories of the U.S.-born players on La Selecta, and those of their parents, bear record of the wounds and promises of two countries. Their arrival in El Salvador marks a new chapter, and a challenge, to those in both countries who believe that one’s place of birth determines belonging.