What Defines a Free Cuba? (OPINION) 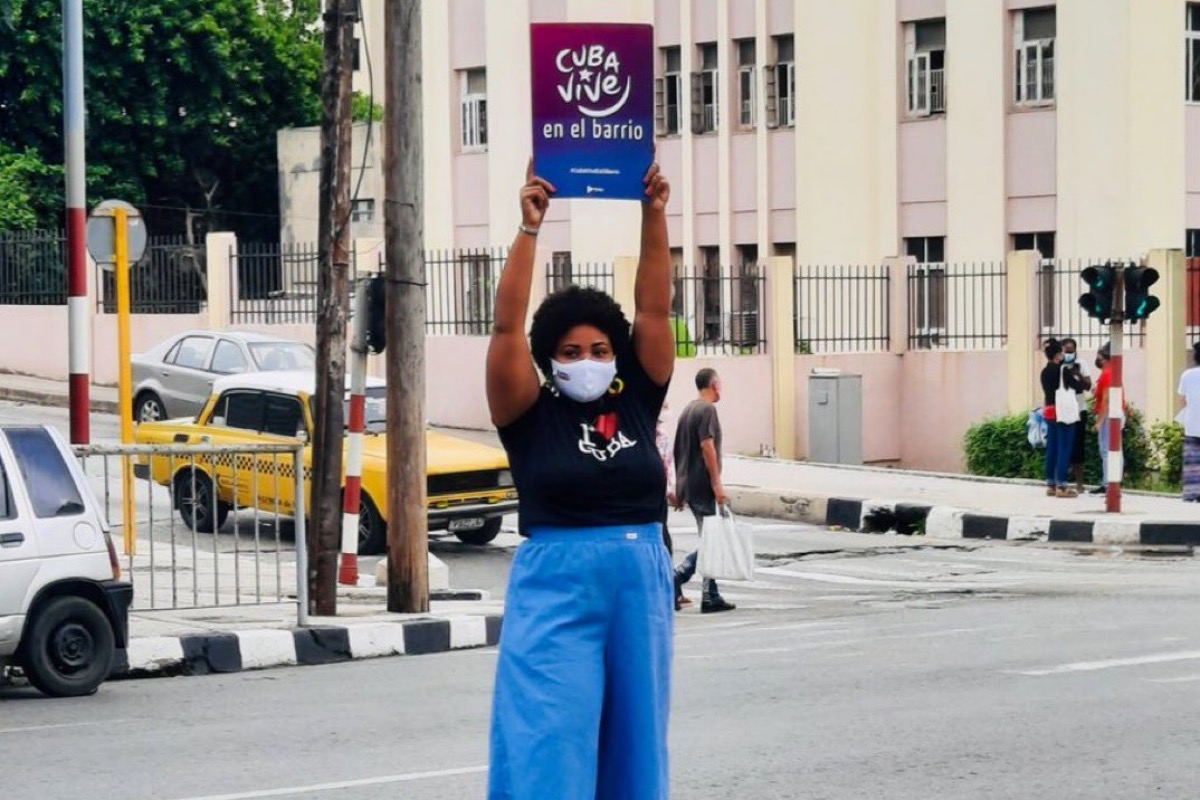 The Cuban government always has a way of reminding the world that it’s really not all that great. In fact, some would argue that it’s pure mierda. Cuba is corrupt and infested with greedy privileged characters at the highest levels who have been profiting from the misery of the people.

While the Cuban government has much to be criticized for, let’s stop pretending the United States has been innocent over the last six decades. Let’s also stop pretending the situation in Cuba is a story with a single narrative akin to some sort of white-washed lullaby created by the State Department.

Let’s talk about support for the regime in Cuba. The root, the very foundation of the support for the government, stems not just from the treatment of Cuba by the United States, but by the equality as a result of socialist policies.

And while many argue that U.S. sanctions have no impact on the Cuban people, that’s only true on Wikipedia. Studies estimate the economic damage leveled on the Cuban economy over the last 60 years at about $130 billion. The ultra-conservative Heritage Foundation’s 2021 Index of Economic Freedom attributes the lack of Cuba’s economic growth in part to U.S. sanctions. Studies also show that Cuba’s annual economic growth of 1.2 percent (as opposed to 6 to 7 percent) is partly the result of economic sanctions unilaterally imposed on the island nation by the United States.

The other part of the equation, and arguably the most responsible for the lack of economic growth, is the Cuban government itself. Had Cuba heeded the advice of Vietnam’s and China’s governments and introduced market principles, Cuba’s economic opportunities could have grown exponentially and potentially lifted the Cuban people out of poverty.

While there may be plenty of blame to go around, if the sanctions don’t work, then why keep them in place? If Cuba is destined to fail, why not let it? Why the continued intervention and isolation when the U.S. and Cuba could be kind neighbors despite their differences in governing? The people of Cuba want a socio-capitalist market economy like those boasted by Vietnam and China. But will the U.S. accept Cuba’s governance if that is the future for the island?

More importantly, will those seeking regime change with their disguised motivations be open to what the people on the island want? My impression from the rhetoric on social media and coming out of Miami tells me no, they won’t accept it. To which I would ask: Is it really the Cuban people they’re out to protect? Because if they’re not interested in listening to the people on the island, I’m likely not interested in listening to them. It’s that simple.

Regardless of how you look at the sanctions, they’ve failed to accomplish what the Department of State set out to do. On April 6, 1960, a memorandum from Deputy Assistant Secretary of State for Inter-American Affairs Lester Mallory to Assistant Secretary of State for Inter-American Affairs Roy Rudbottom titled “The Decline and Fall of Castro” states: “it follows that every possible means should be undertaken promptly to weaken the economic life of Cuba”—leading us to where things stand today.

While that memo may be 60 years old, it became the basis for U.S. policy towards Cuba. “If such a policy is adopted,” the memo continued, “it should be the result of a positive decision which would call forth a line of action which, while as adroit and inconspicuous as possible, makes the greatest inroads in denying money and supplies to Cuba, to decrease monetary and real wages, to bring about hunger, desperation and overthrow of government.”

When it comes to how we are forced to interact with our friends and families, that statement still holds true.

We are in the “bring about hunger, desperation, and overthrow of the government” part of the plan. But according to the Department of State, we’ve been on this precipice for more than 40 years. Yet, no matter how hard the U.S. tries, they can never seem to overthrow the Cuban government as they have countless times throughout Latin America. And the mostly Black and mulatto Cuban people left on the island after the white flight following the revolution will tell you that they are far too resilient to let imperialists push them around.

The U.S. embargo is “the main obstacle to purchase the medicines, equipment and material required to confront the pandemic,” the Cuban Foreign Minister, Bruno Rodríguez, tweeted last week.

The U.S. government told ⁦@NBCNews⁩ that’s not the case. https://t.co/K3q6d6Be4X

As the United States once again normalizes its relationship with communist China and maintains its partnership with Vietnam, one has to wonder about the sudden shift in the acceptance of communism when it comes to the U.S.’ third closest neighbor, Cuba? We all know China and Vietnam —and the U.S.— have horrid human rights records, yet the U.S. looks the other way in those cases. Nothing the Cuban government has ever done even comes close to what China is doing right now to its Uighur and other Muslim populations. But we find ourselves tossing hyperbole around about Cuba, using loaded language as if Cuba were the same or even worse. It isn’t.

Look, I’m not justifying anything the regime in Cuba does. Its actions during the protests over the summer and those taken leading up to the planned November 15 protests speak for themselves. But the United States needs a better understanding of why the dictatorship has so much support in Cuba. We need to stop listening to one side of the conversation and open the doors to hearing all of the people on the island. You can’t win their support if you don’t understand them.

In his memoir, Pichón: Race and Revolution in Castro’s Cuba, Dr. Carlos Moore discusses the change in demographics on the island. “Cuba is at least 62 percent Black, and the Cuban-American community that wants to play a dominant role in Cuba is 90 percent White,” Dr. Moore writes. “The U.S. needs to have a better understanding of what the majority of the Black Cuban populations want, rather than being stuck with the old policy of reacting solely to what the predominantly white Cuban-American community wants.”

The words of Dr. Moore help highlight the differences in political opinion and ideology along racial lines among Cubans. This led me to see something during the protests earlier this year: the anti-government leaders, wearing white shirts, were mostly white themselves, while the pro-government voices that repudiated them, who typically wear red shirts, were mostly Black and mulatto. Intentional or not, the shirts helped define the disparity by drawing a visible line. It’s an awareness I can’t shake.

I’m not saying the protests are racially motivated, but race may play a bigger role in Cuba than people care to admit. Prior to Castro, non-white Cubans were denied access to housing, parks, certain public places, and were widely considered wage-slaves beholden to white landowners and at the mercy of white politicians. After the revolution, everyone had equal access to education, housing, healthcare, public parks and more, despite Castro refusing to address racism and bigotry—including his own.

The regime’s refusal to confront racism led Cuba to a place today that resembles the racism of the 1950s. For example, with no process in place to report discrimination, resorts won’t hire Black and mulatto Cubans to work in public-facing positions, arguing argue that tourists prefer to see white people. The government has said they’ve implemented practices to address and report racism; however, as of this writing, I have not been able to verify if these are in effect.

While this may seem like an overly simplistic analysis, it represents the tip of the iceberg when discussing race and politics for Cubans. You don’t have to be a rocket scientist to know that with the white flight from Cuba, so went generations of white Cubans. As such, the island has only become Blacker over the last six decades, with generations born into what is normal life for them but an aberration to others.

Dozens of socio-political markers highlight the driving force behind the chasm that defines the political differences of Cubans along racial lines. It’s time we stop ignoring them.

I derive my opinions about Cuba by talking to Cubans. I mean, I’m Cuban, right? But I tend to give more credibility to the voices on the island and the stories mi Abuela told me when she moved here to spend her final years with us. Such tales about life in Cuba, the near-constant reports I receive during times of protest, and the dozens of friends I’ve made on the island are who I echo. Of course, there will be disagreement with some of the sentiments I’m sharing, but I’m sharing them for my people in Cuba.

Whether you like it or not, these are the things I am made aware of. It’s only fair to give them the space here in the U.S. that they deserve. We can’t keep leaving them out of the conversation.

So what happens when Cuba adopts a free market economy like its allies? What happens if poverty is all but abolished as a result of such policy shifts? Such possibilities would undeniably open the door to many more freedoms, all of which will surely be glorified on the island, boosting morale and support for the government. These are hypothetical questions, I know, but both are closer than you realize—and almost happened once already.

So, what then? Simple: Capitalists and socialists alike will hail Cuba a success as long as they have access, which is what any U.S. corporation wants. When the United States helps overthrow governments in Latin America, it’s done on behalf of U.S. corporate interests so they can gain access to resources and infrastructure. You’ve seen all the bending-over-backward companies do to maintain access to China and Vietnam.

U.S.-based corporations already have been clamoring for a piece of the Cuban pie for decades, and like good capitalists, they’ll take it any way they can get it.