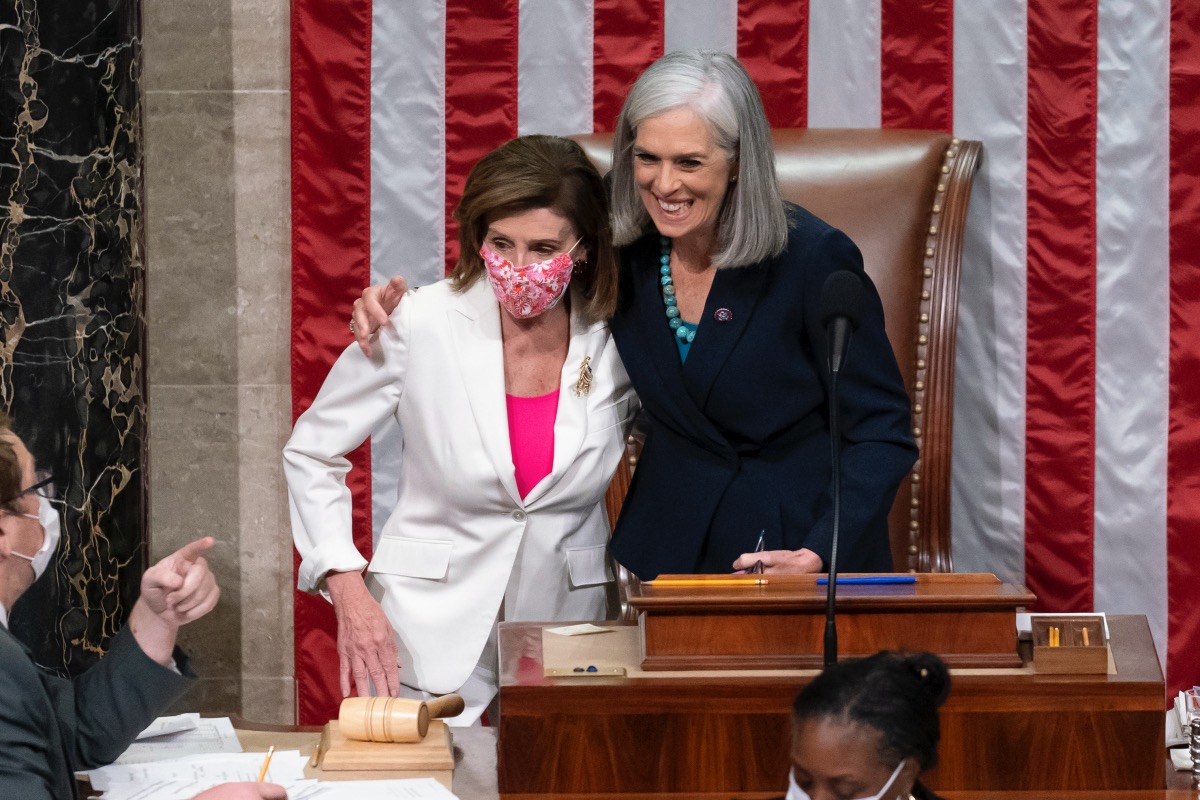 Speaker of the House Nancy Pelosi, D-CA, left, is embraced by Rep. Katherine Clark, D-MA, the assistant speaker, as the House approves the Democrats’ sweeping social and environment bill at the Capitol in Washington, Friday, November 19, 2021. (AP Photo/J. Scott Applewhite)

WASHINGTON, D.C. — Immigration advocates got a rare, if uneven policy win Friday when the House of Representatives voted 220-213 to pass a hard-fought version of the Build Back Better Act that includes a mixed bag of relief provisions facing an uncertain future in the Senate.

However, some immigration advocacy leaders are already asking for more. “The fight for citizenship is not over,” the Refugee and Immigrant Center for Education and Legal Services (RAICES) tweeted minutes after the bill passed. “The bill now goes to the Senate, where we have a chance to fight for more.”

“We need a pathway to citizenship and nothing less,” said Glo Choi, an organizer with Chicago’s HANA Center, a member of the National Korean American Service & Education Consortium. “It’s now the Senate’s turn to include citizenship in their version.”

“A temporary work authorization is not the answer to our prayers,” said Patrice Lawrence, executive director of UndocuBlack Network, in an interview with Bloomberg. “Citizenship was promised to us, not another new temporary program that is going to run into red tape at every turn.”

FWD.us president Todd Schulte pushed back on his grassroots immigrant colleagues on the We Are Home coalition’s steering committee. “The proposals for immigrant relief in the Build Back Better Act have been thoughtfully designed to pass the requirements of the ‘Byrd Rule,’ and we are confident it will do so given the clear and substantial budgetary and economic impact,” said Schulte in a statement.

Parole was designed by the team at Immigration Hub, according to multiple sources on the steering committee. Immigration Hub has the deepest reach in federal affairs, with a staff of former Hill aides and former executive director Tyler Moran now serving as a special assistant to the President for immigration on the Domestic Policy Council.

Moran was replaced by Sergio Gonzalez, a former Senate aide to Kamala Harris who “worked closely with Sen. Harris on oversight of the Trump Administration’s immigration policies,” according to the organization’s website, though it remains unclear to some of Immigration Hub’s grassroots colleagues what results, if any, Gonzales accomplished for Harris in this capacity.

“People who try to frame this as a win for the community need to work closer with more undocumented immigrants,” said Manuel Castro, executive director of New Immigrant Community Empowerment (NICE). “There’s clearly mass disappointment and confusion, and a sense of betrayal.”

Parole replaced a popular citizenship pathway proposal called ‘registry’ earlier this month during an update of the draft bill published by the House Rules Committee.

In a report published late on Thursday, the Congressional Budget Office estimated enrollment of 6.5 million immigrants for the parole program, including three million who already qualify for green cards as relatives of U.S. citizens. Consideration for this category of immigrants was a late arrival to relief negotiations on Capitol Hill, which until recently had focused mostly on supporting undocumented immigrants without green card eligibility.

“It’s like we don’t even exist,” said a tech worker living on a work-based visa in California, who described their relationship with their employers as “indentured servitude” during a July phone interview with Latino Rebels. “Democrats ignore us, then immigrant rights group attack us for working with Republicans.”

“He didn’t want Republicans to get a win for legal immigrants after coming away empty-handed for decades for illegal immigrants,” said the tech worker who spoke on the condition of anonymity, fearing blowback by their employer for speaking to the press.

“Right-wing trolls monitor news stories for backlog people who get quoted. If they can make trouble for your boss or school or family-based situation, they will,” said the source, a concern expressed to Latino Rebels by undocumented organizers at a NICE rally for citizenship last week in Times Square.

Despite the constant threat of being doxxed, Indian green card backlog advocates have emerged this year as a force to be reckoned with online, where a singular focus on Sen. Durbin has involved a relentless pressure campaign of phone calls and trending topics on social media led by Immigration Voice, an advocacy group pushing for green card relief.

⬜️ SENATE: "Sequentially" is how @SenatorDurbin said he wants to proceed. His move. Unclear: Parl on Plan C.

“We strongly support them and have been fighting for them since the beginning of the year,” said Hildingur Mahanti, the group’s vice president, who remains skeptical of Durbin as the bill moves to the upper chamber.

“If (Durbin) were being an honest advocate,” added Mahanti, “he should have already presented the proposals to her and allowed us opportunities to iteratively address her concerns, but he has quite conspicuously not done it for the last three months.”