Mexico Sends Some Minors to U.S. to Get COVID Vaccine 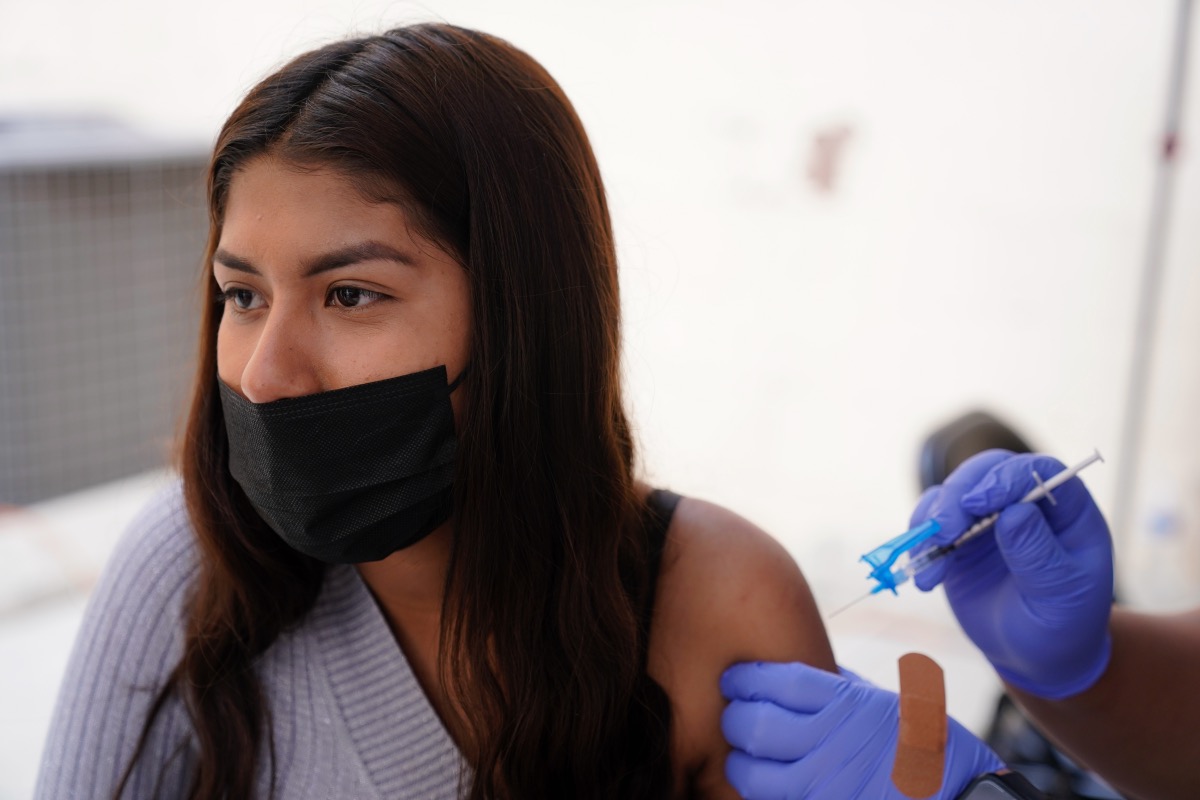 A young woman from Tijuana, Mexico, receives a vaccination shot against the coronavirus outside of the Mexican Consulate building, Thursday, Nov. 18, 2021, in San Diego. (AP Photo/Gregory Bull)

SAN DIEGO (AP) — Scores of Mexican adolescents were bused to California on Thursday to get vaccinated against the coronavirus as efforts get underway across Mexico to get shots in the arms of teens.

Mexico has resisted vaccinating minors ages 12 to 17, in part because the government focused on older adults believed to be more vulnerable. Mexico also has not had enough vaccine supply for most of its minors, who account for one-third of its population. The country this month is preparing to start vaccinating only teens ages 15 to 17.

So a group in San Diego along with San Diego County stepped in to help their southern neighbor.

The pilot program in San Diego aims to get shots in the arms of 450 youths ages 12 to 17 before it ends in late December. The adolescents from Tijuana were selected by Mexican social service organizations, including those who work with the children of parents deported from the United States.

About 150 kids from Tijuana were bused to the Mexican consulate in San Diego on Thursday where county nurses administered the Pfizer vaccine.

Among them was 14-year-old Leslie Flores who said she was nervous but also happy about getting the shot.

“Because this way I can protect myself and my family,” Leslie said.

The county donated the doses. The teens will return in about three weeks for a second shot.

All of the adolescents have a U.S. visa or passport, but they were unable to come to the United States before now to get the vaccine because they did not have an adult able to cross the border with them, said Carlos González Gutiérrez, the Mexican consul in San Diego.

“Baja California is experiencing a third wave” of infections, he said. “There is no doubt that this will help.”

The program will be evaluated in early 2022 and officials will decide then whether it needs to be continued.

Hundreds of parents in Mexico have taken legal action against the Mexican government to demand the right to be able to give the vaccine to their children. Overall, about 84 percent of Mexico’s adult population has had at least one dose of the vaccine.

The effort comes less than two weeks after the United States fully reopened its borders, and Mexican officials see it as another step toward ensuring the border stays that way. Border businesses were decimated by the 18-month closure to tourists and shoppers.

About 80 percent of the adult populations in both San Diego County and Baja California have received at least one dose of the vaccine.

The first mass vaccination of Mexican minors happened last month along the Texas border when more than 1,000 children from the Mexican border state of Coahuila were bused to Eagle Pass, where they got their first shot of the Pfizer vaccine administered by members of the Texas National Guard. The youths ages 12 to 17 are the children of workers at border assembly plants known as maquiladoras.

In May and early June, more than 26,000 maquiladora workers in Baja California were vaccinated at the San Ysidro border crossing in San Diego.