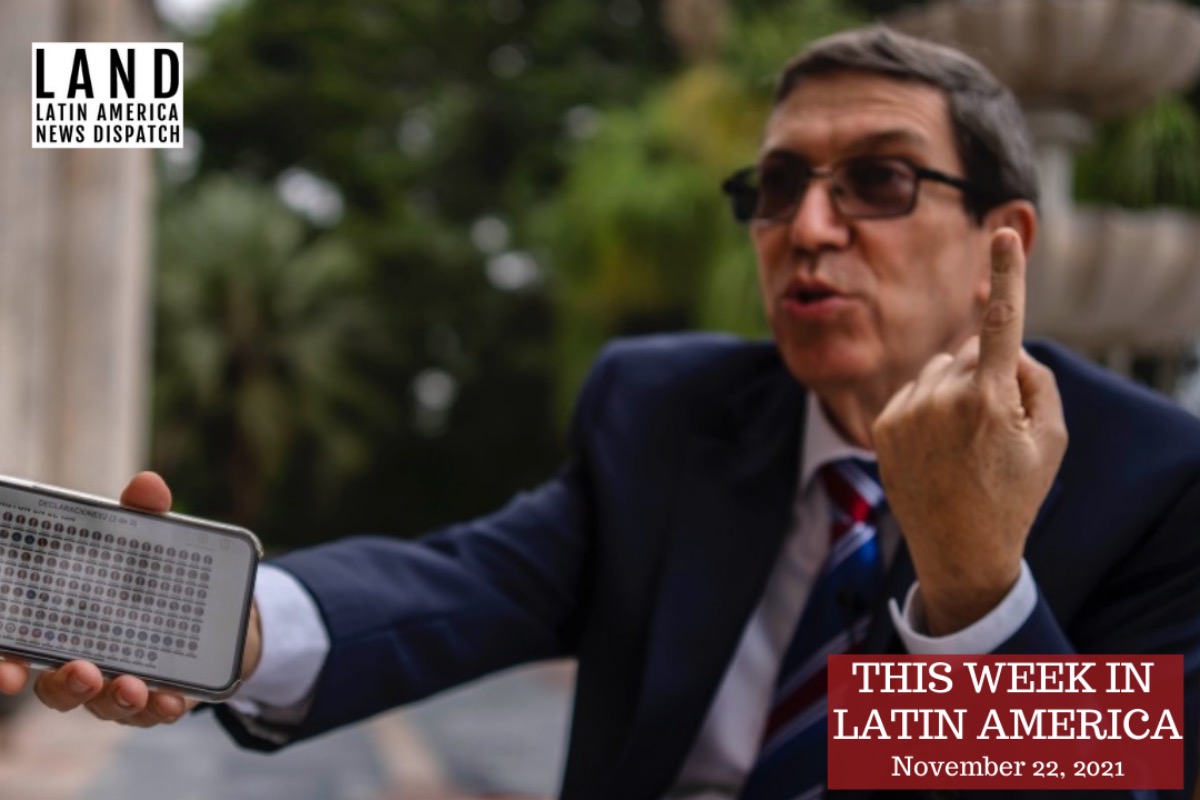 CUBA: Anti-government protests planned for last Monday by online group Archipiélago failed to materialize. The group cited the heavy police presence in the streets as their reason for remaining at home.

Videos circulating on social media show that counter-protesters also gathered outside the homes of lead organizers chanting revolutionary slogans in support of the government.

Foreign Minister Bruno Rodríguez called the protests an “absolute failure” in an interview on Tuesday. He also criticized U.S. President Joe Biden for not yet addressing the embargo and continuing with Trump-era policies that have exacerbated the country’s shortage of basic goods.

The administration has repeatedly accused the U.S. government of helping to organize the protest in order to destabilize the island.

White House National Security Adviser Jake Sullivan released a statement on Monday condemning what he described as the Cuban government’s “attempt to silence the voice of Cuban people as they clamor for change.”

In recent weeks, the State Department has issued various statements in support of the protests. Additionally, the U.S. House of Representatives passed a resolution on November 3 “expressing solidarity with Cuban citizens demonstrating peacefully for fundamental freedoms.”

Organizers of the protest had hoped to replicate the unprecedented anti-revolutionary demonstrations of July.

CHILE: Far-right politician José Antonio Kast and former student activist Gabriel Boric will face off in run-off elections to determine Chile’s next president. In the first round of voting yesterday, Kast led the seven-candidate field with 27.9 percent of the vote, while Boric received 25.8 percent. The second round is scheduled for December 19.

Kast heads the ultra-conservative Republican Party which was formed in June 2019. He has rejected the “far-right” label, but is an open supporter of the Pinochet dictatorship and has expressed homophobic, anti-abortion, and anti-migrant views.

Boric is the candidate of the youth-led, left-wing party, Social Convergence. He rose to prominence in 2011 as a leader in the mass student protest movement for increased public investment in education.

PARAGUAY: Police on Thursday destroyed the homes and crops of the Hugua Po’i indigenous community in eastern Paraguay. Armed with riot gear, submachine guns, and a helicopter, police carried out an eviction order against the community from lands they have occupied since 2014.

The Mbyaá Guaraní people of the Hugua Po’i community claim ownership of an area of land in which they say their ancestors are buried. The agricultural land surrounding the village will reportedly be handed over to soybean farmers.

Evictions of indigenous and peasant communities have become a feature of President Mario Abdo Benítez’s administration. In September, the government passed a law that increased the maximum prison sentence for persons found guilty of illegally occupying land to 10 years.

PERU: Opposition lawmakers, including Keiko Fujimori, on Friday presented a motion to impeach Peruvian President Pedro Castillo for “permanent moral incapacity.” The effort is unlikely to garner the votes needed for impeachment but highlights the challenges Castillo faces only four months into his term.

Keiko Fujimori narrowly lost the presidential election to Castillo earlier this year. Lawmakers would need 52 votes out of a 130-member Congress to initiate impeachment proceedings, and 87 votes to depose President Castillo.

The same constitutional mechanism was used to impeach former President Martín Vizcarra in 2020, and in 2018 Pedro Pablo Kuczynski opted to resign minutes before an impeachment vote. Castillo is Peru’s fifth president in the last five years.

VENEZUELA: Venezuelans headed to the polls for critical regional and local elections on Sunday. Opposition parties returned to the electoral ballot after they boycotted presidential and parliamentary elections in 2018 and 2020.

Twenty-one million voters registered to participate in the elections, with over 3,000 state governors, mayors, and city councils across the country to choose from.

European Union representatives will observe elections in Venezuela for the first time in 15 years. The elections could play a crucial role in resolving Venezuela’s political crisis.

GUADELOUPE: France on Sunday sent special forces to address the violence that has accompanied protests in Guadeloupe over COVID-19 restrictions. There have been ongoing reports of roadblocks, looting, arson, and gunfire over the past week of demonstrations.

Guadeloupe, a former colony, is an overseas department and region of France, with the same legal status as those of the mainland.

Police arrested dozens of protestors over the weekend and several buildings in Pointe-à-Pitre, the island’s largest city, were destroyed. The administrator of France’s overseas territory on Friday instituted an overnight curfew in an attempt to curb the violence.

Approximately one-third of the island’s population is fully vaccinated against COVID-19, compared to over 75 percent across all of France.

EL SALVADOR: President Nayib Bukele said on Saturday that El Salvador plans to build the world’s first “Bitcoin city” in the eastern region of La Unión. The 300,000 bitcoin project will be financed by the State.

Bukele announced a “volcano bond” that would attract investors to begin the construction. The country recently began exploring bitcoin mining powered by volcanoes. “This is a fully ecological city that works and is energized by a volcano,” said Bukele.

El Salvador became the first country in the world to adopt bitcoin as legal tender. Some of Bukele’s supporters have grown skeptical about bitcoin. They continue to criticize its uncertainty in the market, adaptability, and turbulent start in September that provoked city-wide protests.

NICARAGUA: Nicaragua’s government announced its withdrawal from the Organization of American States (OAS) on Friday. Foreign Minister Denis Moncada made the announcement, citing “repeated acts of meddling” by the OAS in Nicaraguan affairs.

Nicaraguan President Daniel Ortega was elected to a fourth consecutive term on November 7 in elections that were widely considered fraudulent. The OAS General Assembly condemned the elections in a resolution, stating that “they were not free, fair or transparent and do not have democratic legitimacy.”

Following the elections, the Biden administration issued a statement banning Nicaraguan government officials and family members from entering the United States. Further sanctions by the U.S. government against the Ortega administration are expected to be implemented.

MEXICO: Two trucks containing 600 migrants from 12 different countries were found in the southeastern state of Veracruz on Friday.

Mexico’s National Migration Institute said on Saturday that 401 of the people found in the trucks are Guatemalan nationals. Four hundred and fifty-five of the migrants were male, and 145 were female, they added.

The Mexican government will give migrants the choice of remaining in Mexico or returning to their home country.

UNITED STATES: The White House hosted on Thursday the first North American Summit in five years. President Joe Biden met with Mexican and Canadian leaders to discuss matters including work and trade agreements, immigration, and the handling of the pandemic.

Tensions remain as Biden had trouble seeking cooperation on the “Buy American” plan and immigration policies. The heads of state were able to find common ground on a few matters that included COVID-19 vaccine distribution.

Following the summit, the Biden administration announced that the agreements include a North American strategy to reduce methane and a promise to donate COVID-19 vaccines to Latin America and the Caribbean.

One response to “Planned Opposition Protests in Cuba Flop”