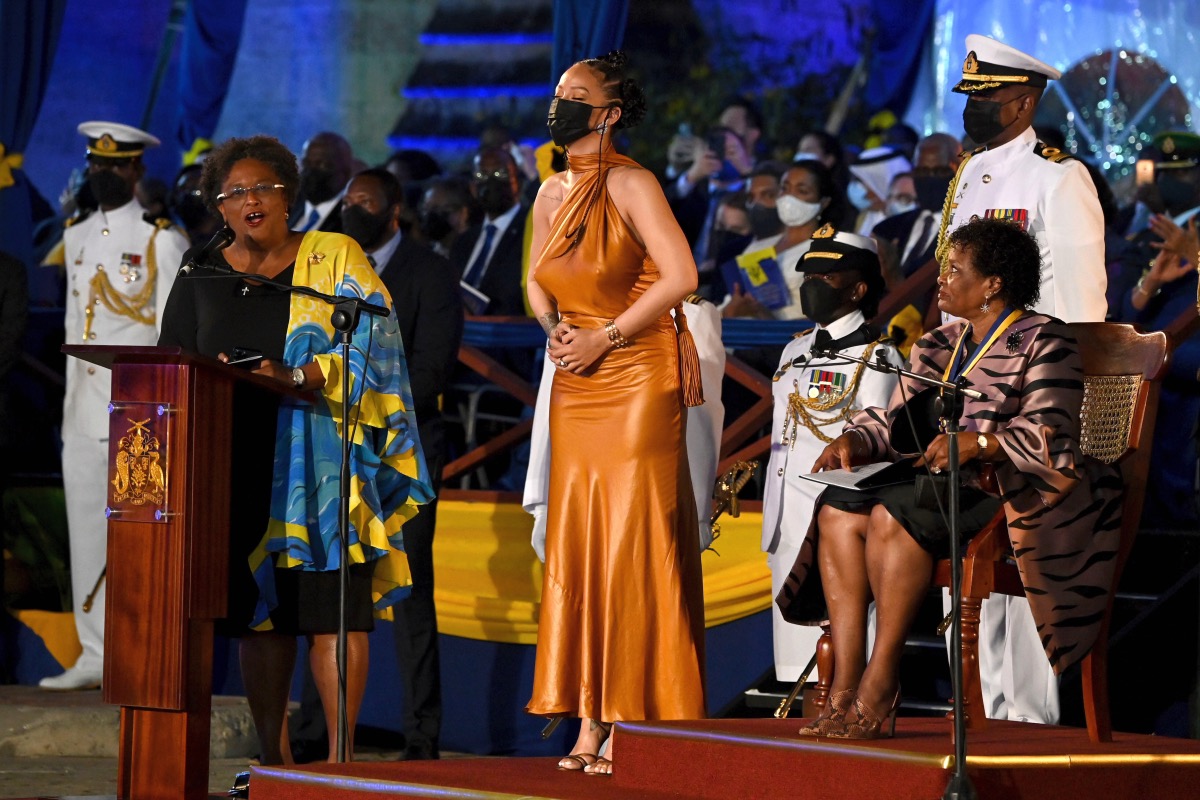 Prime Minister of Barbados Mia Mottley, left, and Barbados President Dame Sandra Mason, right, honor Rihanna as a National Hero during the Presidential Inauguration Ceremony at Heroes Square on November 30, 2021, in Bridgetown, Barbados. The Prince of Wales arrived in the country ahead of its transition to a republic within the Commonwealth. (Photo by Jeff J Mitchell – Pool/Getty Images)

At the stroke of midnight on Tuesday, the island nation of Barbados bid farewell to Queen Elizabeth II as its head of state, casting aside the remaining detritus of colonialism and crown to become the world’s youngest republic. It was a symbolic act —the island has been independent for the last 55 years— but still a profoundly significant one that will resonate throughout the Caribbean, especially in its oldest colony, Puerto Rico.

In a glittering ceremony, Prince Charles, present at the momentous event, spoke of new beginnings, while Queen Elizabeth sent her “warmest good wishes“ in a statement. Both congratulated Barbadians as they became a Republic.

“From the darkest days of our past and the appalling atrocity of slavery, which forever stains our history, people of this island forged their path with extraordinary fortitude,” the Prince said.

“Tonight you write the next chapter of your nation’s story,” he added. “You are the guardians of your heritage.”

"You are the guardians of your heritage."

Prince Charles @ClarenceHouse receives the Order of Freedom of Barbados during the country's transition to a republic https://t.co/bqOH0r7qLp pic.twitter.com/iErCa3dfsw

In the 17th century, the British claimed Barbados as theirs and mutilated it into a cash-generating colony on the backs of hundreds of thousands of African slaves. Close to 600,000 of the more than 12 million souls ripped from their homes and shipped across the sea in chains ended up in Barbados.

Barbados is only the latest Caribbean island to thwart history, following Guyana, which became a republic in 1970, Trinidad and Tobago, which did so in 1976, and Dominica, which gained full independence in 1978.

And while her sister nations shake off centuries of colonial slumber, where is Puerto Rico? Still with her nose pressed against the glass, watching others gain freedom while the people of Puerto Rico are promised baile, botella y baraja by Gov. Pedro Pierluisi and company, who proceed to sell Borikén from under the Boricuas bit by bit.

Puerto Rico is now a fiscal paradise for affluent Americans and foreigners, and Pierluisi, a.k.a. Tony Tursi of Puerto Rican politics, is busy turning all of Puerto Rico into a modern-day La Riviera. He hopes this will keep his party alive, as the pro-statehood New Progressive Party won the last election by the skin of its teeth with only 33 percent of the vote.

So as Barbadians awoke on Tuesday to an independent and free nation, Puerto Ricans, enveloped in a colonial miasma, read in the morning papers of plans to build Bahía Urbana, a high-end seaside community complete with “floating beach” and “an urban forest”—all for the princely sum of $118 million. This is after the mayor of Camuy spent $100,000 on an ice skating rink, using federal funds meant for COVID 19 relief.

Yes, an ice rink in the Caribbean. You can’t get more colonial than that.

An expensive party is just what is needed on an island buckling under the worst financial crisis of its history, brought on by a massive $70 billion debt that led to the imposition of a fiscal control board —known as “la Junta”— and a population decline that exceeds the Great Migration of the 1950s, stripping the island of its human capital.

There are now two Puerto Ricos: one for the rich —the gentrifiers and the local politicians who feed on that trough— and another for the average Puerto Rican, those living on the edge, without electricity, attending schools that are falling apart, dodging bullets, and teetering between paying the rent and buying food.

“After 123 years of U.S. colonial rule in Puerto Rico, today we see a bankrupt Caribbean nation trying to lift itself up economically while confronting the ever-present fact that colonies are not meant to develop but instead have their wealth extracted by the colonial power,” Puerto Rican scholar Javier A. Hernández wrote recently for MANO magazine.

Just dare to bring up the very real possibility of a sovereign and independent Puerto Rico and a swarm of naysayers and vultures will repeat an old lie: that a Puerto Rico no longer under U.S. colonial rule will not be able to care for itself but would become another Cuba or Venezuela—whatever that means.

Except Barbados now stands as a clear example that this is not true. The island nation threw off the yoke of colonialism but in the friendliest of fashions.

“That it has taken so long is evolutionary,” Barbadian Prime Minister Mia Mottley said of the historic day. “But nevertheless, it matters not how long we take, it matters that we complete the task.”

By removing Queen Elizabeth as its head of state, breaking from its colonial past without fear, Barbados has given Boricuas not only hope that getting rid of Uncle Sam can be done, but also an affirmation that it must be done.

And so it is that the easterly winds that once carried ships from Europe and Africa to the Caribbean now bring the rustlings of change to all its island nations, including the one remaining colony.