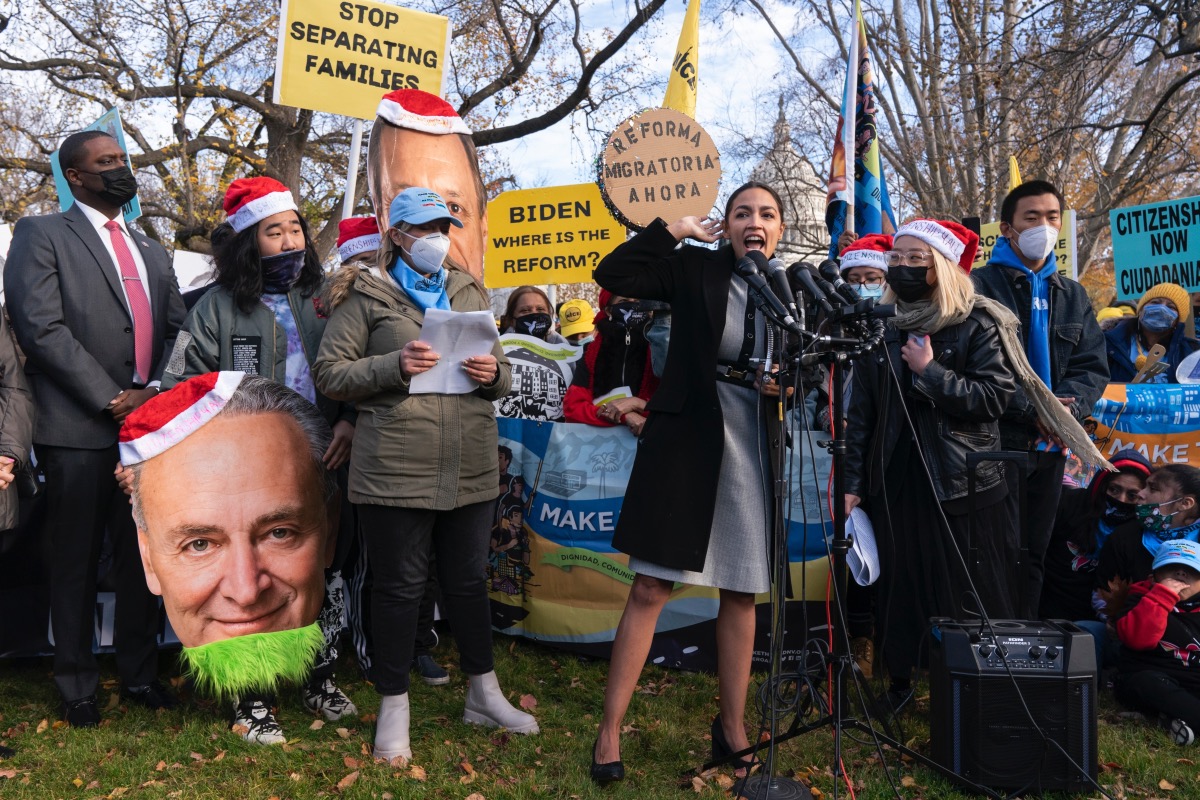 WASHINGTON, D.C. — Two obscure sections of immigrant relief, passed by the House as part of the Build Back Better Act, now hang in the balance in the Senate.

Section 60002 of the House text addresses recapturing work- and family-based visas that have gone unused in the years since 1992.

Section 60003 deals with the early adjustment of immigration status for visa holders stuck in decades of backlog often related to seven percent country caps imposed by the U.S. immigration code.

The relief provisions are so obscure, Sen. Joe Manchin (D-WV) said he had never heard of them until Latino Rebels asked him about them on Monday. “I’ll be darned,” said Manchin. “I haven’t seen that yet, but I’ll look into it.”

“They sort of only give you visibility into the parliamentary review that is for your own subject matter,” explained Sen. Brian Schatz (D-HI). “Only (Senate Majority Leader) Schumer would know the whole picture, or the [committee] chair in that area.”

Majority Whip Dick Durbin (D-IL) chairs the Judiciary Committee that has been handling immigrant relief proposals to Senate Parliamentarian Elizabeth MacDonough, who is out on leave as she battles breast cancer.

“I don’t know,” said Durbin on Monday when asked by Latino Rebels why the visa recapture and early adjustment of status provisions of the House text had not been proposed yet to MacDonough. Durbin had indicated previously to Latino Rebels that he wants to avoid inundating MacDonough with proposals.

When asked the same question, Sen. Bernie Sanders (D-VT) fired back with a question of his own: “How do you know they haven’t been proposed yet?”

Just asked @SenSanders why gc recapture + early adj of status hasn't been pitched yet to parl.

"How do you know it hasn't been proposed?" asked Sanders.

It's what the press has been told.

"Well, it's difficult to comment if you don't have all the facts."

“My understanding is what’s being pursued here in the Senate is the House-passed language,” said Senator Ben Ray Luján (D-NM). “It’s going to be important for us to get these initiatives adopted and included in the final package.”

Kerry Talbot, a former Senate aide who helped design the “Plan C” pitch currently being proposed, said she believes 60002-3 will be presented to the Parliamentarian. “Hopefully she approves them,” Talbot said.

Grassroots immigrant rights groups arrived in Washington by the hundreds on Tuesday for a midday rally and press conference with several House Democrats, thoroughly rejecting the parole proposal as not enough.

Members spoke for about five minutes on the West Lawn of the Capitol, with immigrants telling tearful stories of inequality in between the congressional segments of the program. Together they argued that the Build Back Better Act ought to have a pathway to citizenship.

Ironically, it was House Democrats who just weeks ago scrapped a citizenship pathway from the Build Back Better Act version that they themselves had voted for.

“What’s in the bill right now was the most we could get out of the House,” said Garcia, “in part because there were many more conservative Democrats who were afraid for good reason that if we had a pathway to citizenship the Senate would do what it’s done twice when we pass immigration reform out of the House.”

An immigrant parole proposal designed by Washington lobby shop Immigration Hub replaced citizenship in the House, in part because Garcia, Espaillat, and Correa declined a last-minute offer by House Speaker Nancy Pelosi (D-CA) to re-write the immigration text in the bill.

“We must make sure loud and clear that if her ruling is adversarial to us that we must move forward and challenge her ruling and make sure we take this vote on the floor,” Espaillat said of the impending decision by Parliamentarian MacDonough, who doesn’t actually “rule” on anything but is simply an advisor to the Senate.

“Let the votes fall where they may for all of you who during the pandemic delivered the food to our doorstep, picked the crops in our meal, took care of our frail and elderly parents, who drove us around to where we needed to go, those of you that worked as cashiers in the supermarkets, exposing yourselves to the virus,” continued Espaillat, who is the first and only member of Congress to have been an undocumented immigrant himself. “Those of you that were out there when it really counted for America and our families—you deserve to have citizenship now.”

Rep. Alexandria Ocasio-Cortez echoed Espaillat. “We will no longer accept being a country that accepts our labor, but doesn’t accept our humanity and dignity,” she said in Spanish. “We’re almost two years now into a pandemic where our country relies on undocumented people to survive. Because who else was sanitizing our buildings? Who else was caring for our elders? Who else was harvesting our food? Who else was stocking our shelves except immigrants to the United States?”

Reps. Joaquin Castro (D-TX) and Veronica Escobar (D-TX) held a press conference at House Triangle just before Thanksgiving to tout the parole option. Both Texas Democrats conceded that the parole option was not what they’d hoped for in the Build Back Better Act, but that the provisions passed in the House bill had a lot to offer immigrants.

Tuesday’s presser to demand citizenship had also been scheduled for House Triangle but the event had to be moved due to the hundreds of supporters who attended.

The Senate Parliamentarian is expected to meet Wednesday for a final “Byrd Bath” session on the parole option, during which Senators from both parties present arguments to the Parliamentarian who then gives her non-binding guidance to the Senators. Sen. Durbin told reporters as late as last week to expect MacDonough’s guidance within a day or two of the meeting.