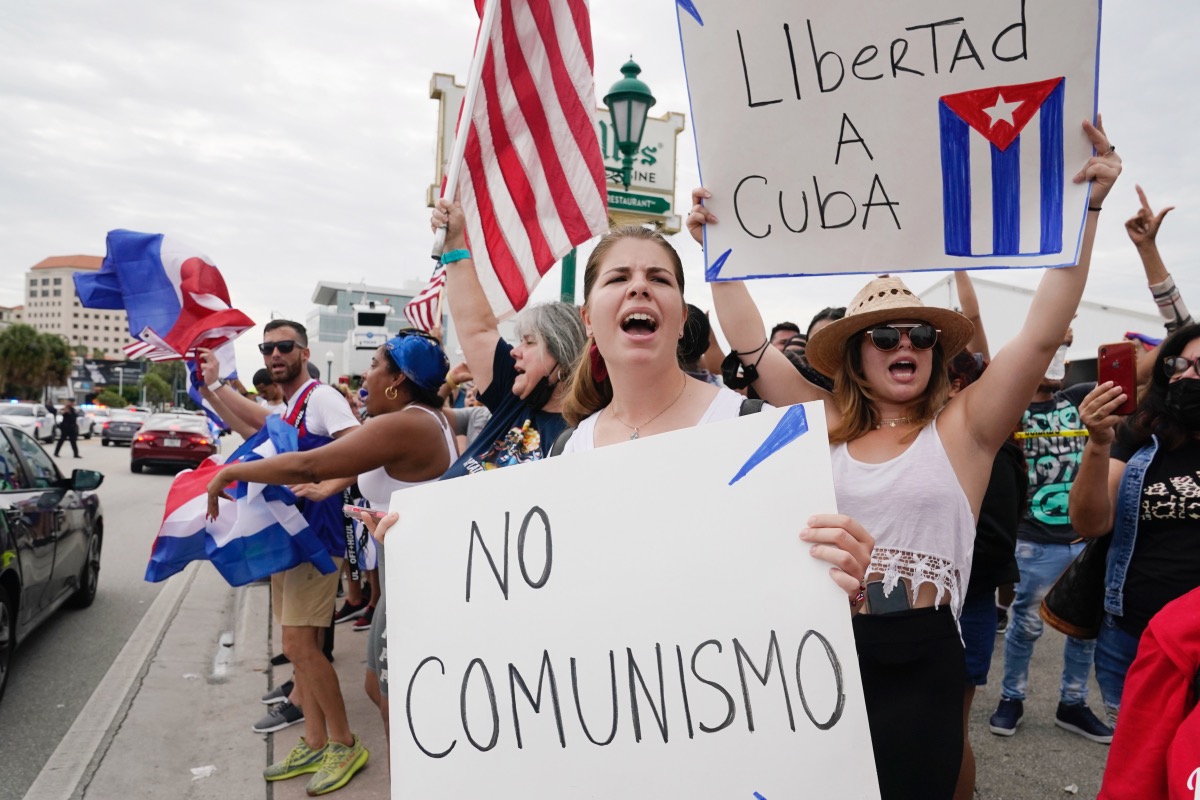 It’s not enough to talk about misinformation online, especially when discussing the deceptive commentary targeting various Latino communities in the United States. Screams of socialism and communism have a greater impact on many, particularly when it comes to Latinos from places such as Cuba or Venezuela. The connotations of fear associated with those words —whose meanings have been stretched thin— are effortless to propagandize.

Many politicians are using these tactics to make inroads with Latinos.

A recent Nielsen report on U.S. Latinos found that “misinformation poses a threat to Hispanics, who are particularly vulnerable due to a greater reliance on social media and messaging platforms.” This has been particularly true in two areas: politics and health.

Concerns about misinformation in health have been present for some time, as Latinos are nearly three times more likely to be uninsured than white people. Thus, they search for information online.

A growing number of people in the United States rely on digital information regarding health and wellness. That growth makes the population susceptible to being exposed to misinformation that could wreak havoc in various communities.

Such is the case with COVID-19.

Latinos account for a disproportionate rate of coronavirus cases and are twice as likely to die as non-Hispanic whites if infected. Despite varying reasons for these statistics, misinformation plays an outsized role over occupation and economic status.

When it to one of the most polarizing issues in the world, politics, Latinos in the U.S. are being targeted with intentional misinformation. When talking about Cuba, for example, hyperbole from the self-proclaimed “Cuban Mafia,” the anti-Communist Cuban community of South Florida, can be just as harmful as that of the Cuban government. The émigrés use coordinated media campaigns to intentionally drown out stories from the island told by Cubans themselves, and their job is made easier by the fact that U.S. media only speaks to Cubans who talk negatively about the Cuban regime and its supporters on the island.

While the majority of the United States grapples with right-wing extremism, many continue to overlook the misinformation campaigns directed at Latino communities and, even more so, among Cubans in Miami. Some of the propaganda includes —but is not limited to— claiming more votes were cast than there were registered voters in Pennsylvania, and even the conspiracy theory claiming Black Lives Matter and Antifa were behind the attack on the Capitol on January 6, 2021.

Adding credibility to many of the claims being made via talk radio and social media is U.S. Rep. María Elvira Salazar of Miami-Dade County’s 27th congressional district. While radio hosts at popular local AM stations Actualidad Radio and Radio Mambi were making absurd assertions, Salazar was among regular high-ranking guests endorsing many of the claims.

Some of the more extreme talk radio hosts in the Miami area are Agustin Acosta, Carines Moncada, Lourdes D’ Kendall, and Nelson Rubio. Prior to the 2020 election, this quartet was responsible for spreading misinformation in what appeared to be a coordinated effort. Their message was consistent enough across all social media channels and through Miami’s airwaves to indicate concerted actions were taking place.

To get an idea of how it works, you only have to look at the protests that occurred in Cuba during the summer of 2021. Cubans took to the streets to draw the attention of the international community as they sought help with a lack of over-the-counter medicines, food, and vaccine distribution. Meanwhile, the anti-Communists Cubans of South Florida drowned those voices out and billed it as an uprising against the government. While Americans’ shunned Cuba based on a false narrative, taking no part in delivering much-needed aid, Mexico and many other Latin American countries heeded the call and delivered aid to the island.

Spreading fears of communism, terrorism, socialism, and every other evil under the sun comes far too easy for Cuban political extremists, because they largely go unchallenged. Challenging them always brings accusations of being a communist or, if you support Black Lives Matter, a terrorist, which in Miami could lead to being ostracized among friends and family—an issue of no concern for those of us who live outside the bubble and are intent on exposing their lies.

The thing about propagandists is, once people get tired of hearing their redundant and baseless claims, they seize every opportunity to breed culture wars using misinformation. Such is the case when Mariela Castro issues a statement. Of the more extreme Miami AM radio jocks, Agustin Acosta jumps at whatever chance he gets to spread falsehoods. And when Castro speaks, his misogyny makes itself obvious.

In fact, a scathing statement directed at her that he posted in 2012 is being recirculated on Facebook, Instagram, and WhatsApp in response to her message of hope for Cubans in 2022. His open letter was so aggressive that it bordered on not making any sense at all. Could he be so angry because she’s also an LGBTQ activist who has helped bring forth policies that support gay marriage and trans rights in Cuba? It sure seems that way.

Mariela Castro Espín is the daughter of First Secretary Raúl Castro and feminist Vilma Espín. She is an activist for LGBTQ rights and is the director of both the Cuban National Center for Sex Education and the National Commission for Comprehensive Attention to Transexual People. She is also a sitting member of the National Assembly of People’s Power and has written nine books and 13 academic articles.

“Keep resisting in your struggle to advance in this unique project of socialist transition, a project full of learning and very emotional, very deep experiences, where colleagues who have given everything and who we will always remember have remained along the way,” Castro declared in her statement to Cubans via Radio Reloj on December 30, 2021. “There is always a space to learn, to give, to develop in this beautiful project to maintain the sovereignty, independence, and democracy of Cuban socialism,” she added.

Since making her statement, much has been said by the Cuban American lobby, and nothing more inflammatory than the words of Agustin Acosta from 2012, which have recently been making the rounds on social media in a seemingly coordinated effort. When Acosta made his subversive statement, it was in response to Castro calling South Florida Cubans out for supporting sanctions and U.S. intervention on the island. What’s obvious is that the tactics employed by the misinformers in Miami were taken right out of the conservative propaganda playbook.

In addition to the decades of misinformation, the extremism from many of talk radio’s most prominent voices took a turn after the election of Donald Trump. For most of the United States, it seems that immigrants coming from countries with dictatorships in power would balk at the sight and sound of someone like Trump. What many don’t understand is that there’s more to the Cuban American demonization of the Cuban government. Much more.

We are all aware of the deplorable actions of the Cuban government, which silences protests using law enforcement and incarceration deterrents. The issue is that the United States does the same thing regularly—made evident by the mainstream media coverage of Black Lives Matter protests in the summer of 2020. In fact, talk radio hosts in Miami supported police actions against Black Lives Matter protestors.

In the leadup to the 2020 election, Acosta suggested that the wildfires in California were a sign of Judgement Day as foretold in the Bible. He argued that the Democrat-run state courted disaster by turning against God, attacking religions, and closing churches. While untrue, it played right into the hands of QAnon conspiracy theorists who have made painting Democrats as a Satanic cabal of pedophiles their primary goal.

When Univision asked Acosta if his comments about California were appropriate, he replied: “It is not some weird conspiracy theory. I am basing it on a theological foundation that has thousands of years of history, even if it may seem crazy or crazy or you don’t understand.”

In other words, a non-answer, which is what conspiracy theorists do. When they can’t validate their nonsense, they screech more absurdities as a diversionary tactic. And sadly, it works.

As a second-generation Cuban American, one of the stereotypes I despise about my people is that we’re all white and racists. It’s one of the biggest motivators in me becoming an anti-racist journalist navigating the intersection of politics and race. But nothing could be further from the truth. Cubans are mostly (at 65 percent) Black or mulatto, especially on the island since the white flight that began in the 1960s. Among Cuban Americans, many of us are anti-racist as well.

While the stereotype bears little truth, the reality is that far too many Cubans are racists. In fact, it could be argued that the hatred for Cubans on the island who support the regime stems from the anti-Blackness that existed prior to the revolution. It was Castro’s revolution that finally brought the start of desegregation on the island and equal treatment for everyone—like the U.S.’ own efforts, still a work in progress. This doesn’t mean that racism in Cuba doesn’t exist, but everyone suffers under both the regime and the oppressive trade sanctions put in place by the U.S. government.

The anti-Blackness in the Cuban diaspora, much like that among white Americans in general, is hereditary—bigotry passed down from one generation to the next. Colorism, sexism, misogyny, homophobia, and transphobia are all handed down from older generations. What makes these old guard Cubans so angry are people like me who drive conversations by bringing in the younger generations who are open to calling out and saving the Cuban people from the Cuban government and U.S. imperialism driven by corporate interests.

The Cuban diaspora is growing more colorful in the United States. Discussions are no longer being had in an echo chamber driven by white (often racist) Cubans. Black and mulatto Cubans are becoming more and more of a presence, a force to be reckoned with when it comes to discussions about Cuba, racism, and bigotry. No longer are white cis Cubans owning the conversations in both the U.S. and the island.

The strides Mariela Castro has made are proof of that, and they hate it.

From my perspective —formed by the people on the island more so than by my fellow Cuban Americans— it appears that bigotry is a big force behind what many conservative Cubans believe. The adoption of far-right views only serves to further drive that home, and I don’t trust many Cuban Americans for that reason. Seeing wannabe-Anglo Cubans like Enrique Tarrio, leader of the fascist group, the Proud Boys, running around pretending to be woker than woke, speaks volumes.

If it weren’t for fearmongering and propaganda, these talk radio hosts and influencers wouldn’t have a platform. They have influence only because the U.S. Department of State allows them to. If they were rational, if they were logical, the United States would be trying to silence them. Cuban Americans praise the U.S. because they claim they have freedom of speech, but like Cuba, if that freedom is used to speak against systems of oppression, then it’s promptly silenced—like the racial justice protesters of 2020 met with chemical weapons, rubber bullets, and beatings by police, resulting in 14,000 arrests of non-violent protesters. This, in the “land of the free.”

But conservative Cuban Americans would rather not talk about that.