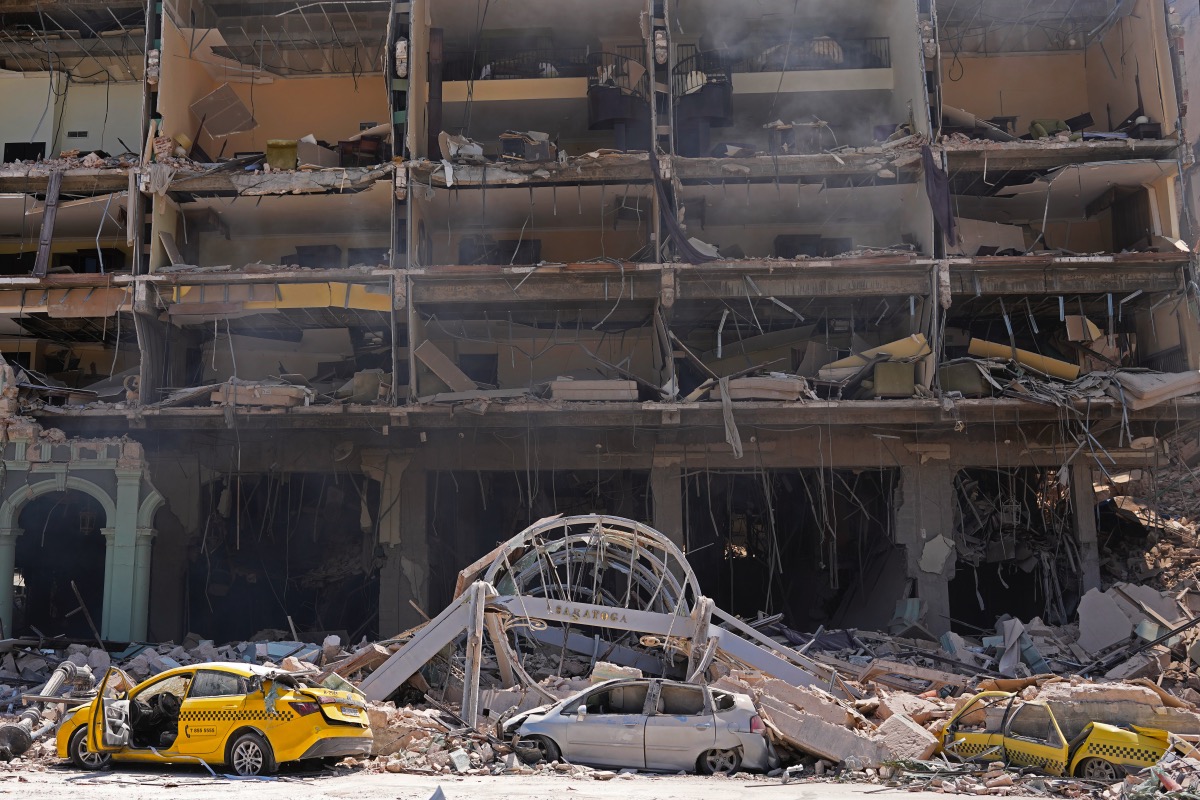 Rooms are exposed at the five-star Hotel Saratoga after a deadly explosion in Old Havana, Cuba, Friday, May 6, 2022. (AP Photo/Ramon Espinosa)

HOUSTON — After a night of rainstorms, it was a cool, partly cloudy morning last Friday, May 6, in Houston, Texas, with temperatures expected to rise into the 90s later that day. The weather forecast in Havana, Cuba was nearly identical: low 70s with a high in the 90s and partly cloudy.

But as Cubans went about their morning, tragedy struck the capital city.

As gas was being delivered to the Saratoga Hotel, just one block from the National Capitol Building, a suspected leak triggered a blast that destroyed the historic upscale hotel, killing 44 and injuring nearly 100 people. The hotel had been closed for two years due to the coronavirus pandemic and was scheduled to reopen on May 10.

Within minutes, notifications began popping up on my computers and cell phone via WhatsApp, Facebook Messenger, and text messages. Videos and images from several sources were flooding in without much context as very little was known.

On social media, everyone began to speculate. Was it a bomb? Was it terrorism? An attack on the island? Bedlam followed.

Happening now: Building collapse in Cuba. Several people on the ground suspect a bomb went off. They are also saying many people are dead. Stay tuned.

Several witnesses reported smelling gas as early as 6 a.m. Others said they thought it was a bomb. As shock settled in, imagined scenarios flooded the internet. Some tried to use the confusion to signal an uprising. As of this writing, two people have been arrested for posting live on social media and allegedly declaring an insurgency.

Much of the imagery shared across various channels is too graphic to share. The actual ownership or attribution of such images is also unclear, as many people were sending identical snapshots.

The first video I received was recorded by someone arriving just minutes after the blast occurred. Within an hour, the video was making the rounds in Facebook and WhatsApp groups. However, the video was taken down within the next few hours for reasons that remain unclear.

After receiving confirmation from multiple sources as to the video’s authenticity, I post the video posted to Twitter, where the events unfolding were being live-tweeted. Communication with multiple sources helped to provide information before most legacy media had any details.

Conspiracy theories were everywhere. Luckily, Cubans put a lot of it to rest immediately by calling out and not engaging with them. Most called for a suspension of political discourse as the island nation grieves for the victims—many obliged. But a week after the explosions, ideations and suspicions from the initial day are still popping up online.

From Shock to Anger

around the world, society has become an environment that leaves people suspicious of the “official story” from any government. Thanks to a long and sordid colonialist history that whitewashes the truth of everything, it’s no wonder why.

Cuba is no different. Many on social media are suspicious of the government’s swift conclusion that the explosion was an accident.

The announcement came just over an hour after the incident. Based on witness reports, it’s clear how that conclusion was reached. While a thorough investigation was promised, the likelihood that the unpredictable happened is high. Assessments of the blast suggest a buildup of gas within the structure that was ignited by an appliance, light switch, or something similar.

However, many questions have yet to be answered. Events like these always expose some form of negligence. Did people ignore the smell of gas because it’s so common in Old Havana? Was the driver dismissive of a potential leak? Was the staff dismissive?

The families of victims hope that these and many other questions will be answered with a thorough investigation.

The sense of frustration on the ground in Cuba is also induced by the country’s president, Miguel Díaz-Canel Bermúdez, and how he spent the Sunday after the explosion with Mexican President, Andrés Manuel López Obrador, courting him with a concert and banquet rather than calling for a day of mourning, as many Cubans were demanding.

President Díaz-Canel wouldn’t declare a national day of mourning until Thursday, May 12.

Tensions in Cuba were already high, and now the added threat of another gas explosion is real to many Cubans. Earlier this week, reports of a gas leak in Havana triggered a panic. Hours later, three people were seriously injured in a gas explosion. Then, a warehouse at the Guaicanamar Convention Center also caught fire.

Both events quickly became part of a larger disinformation campaign.

Americanized Cubans have already attempted to turn the explosion at the Saratoga Hotel into the beginning of an uprising. When the subsequent explosion occurred, they pointed to it as a reason not to trust the government. Now, every fire or catastrophic incident is being used as a call to trigger another revolution.

The explosion at the Saratoga Hotel appears, on the surface, to be caused by the gas delivery that was occurring at the time; an accident. However, this does not rule out negligence which has yet to be proven. The Cuban people have done an excellent job at deflecting misinformation so far—yet it persists as the island nation grieves.

As of this writing, the cleanup from last Friday’s blast is continuing. Cuba has suffered a great deal in the last month—more so than they have in decades. The feeling of anxiety is palpable and understandable.

The Cuban people deserve our compassion and empathy, not more lies and deceit by outsiders and interventionists about what they see happening in real-time.

2 responses to “Chaos in Cuba After Hotel Explosion (OPINION)”