We are publishing a first-hand account of Saturday's #OccupyWallStreet protest that ended in Times Square.

by Will Hamza Giron

On October 15, 2011, the 15,000 protestors part of the Occupy Wall Street movement, in solidarity with other major protests around the world, took over Times Square. Since the protests started, the mainstream media has criticized the movement for its leaderless structure, and lack of a cohesive list of official demands. But this hasn't stopped the movement from growing. The protestors swarmed midtown Manhattan, shutting down traffic on Times Square for almost two hours, before finally marching down to Washington Square Park in the West Village. 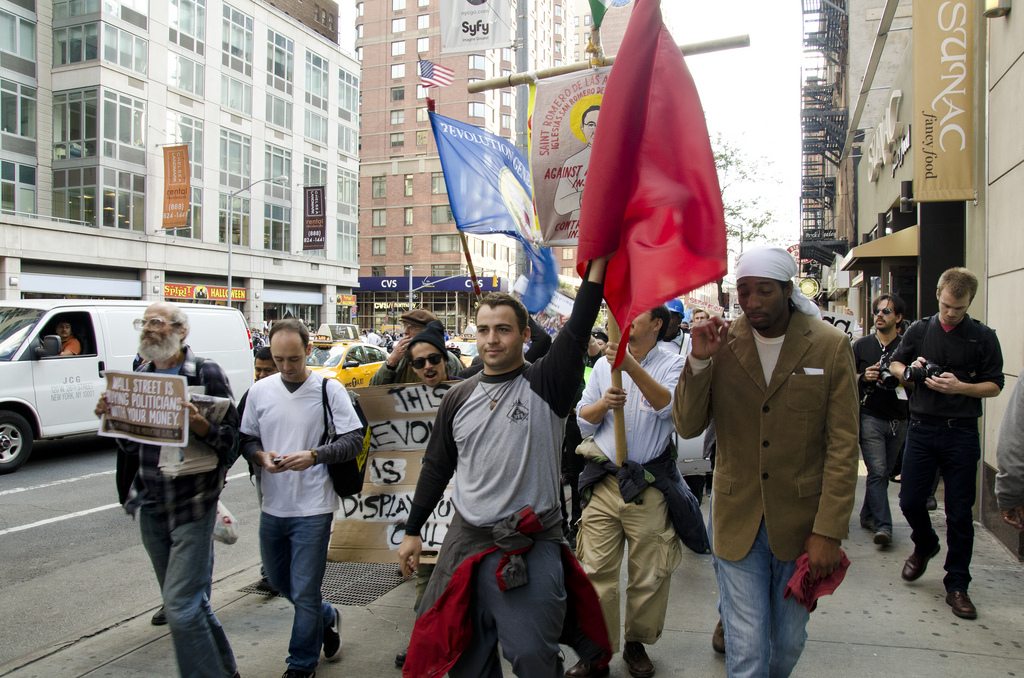 The 'Massive Convergence' event was part of the 'Day of Action' campaign consisting of various rallies around the city that culminated to a final meet up in Times Square. At 11:00AM, protestors in the Bronx gathered for an 'Occupy the Bronx' meetup at Fordham Plaza, while elsewhere in the city, down by Zuccoti Park (Liberty Plaza), protestors crowded in front of a Chase bank branch to close their bank accounts. 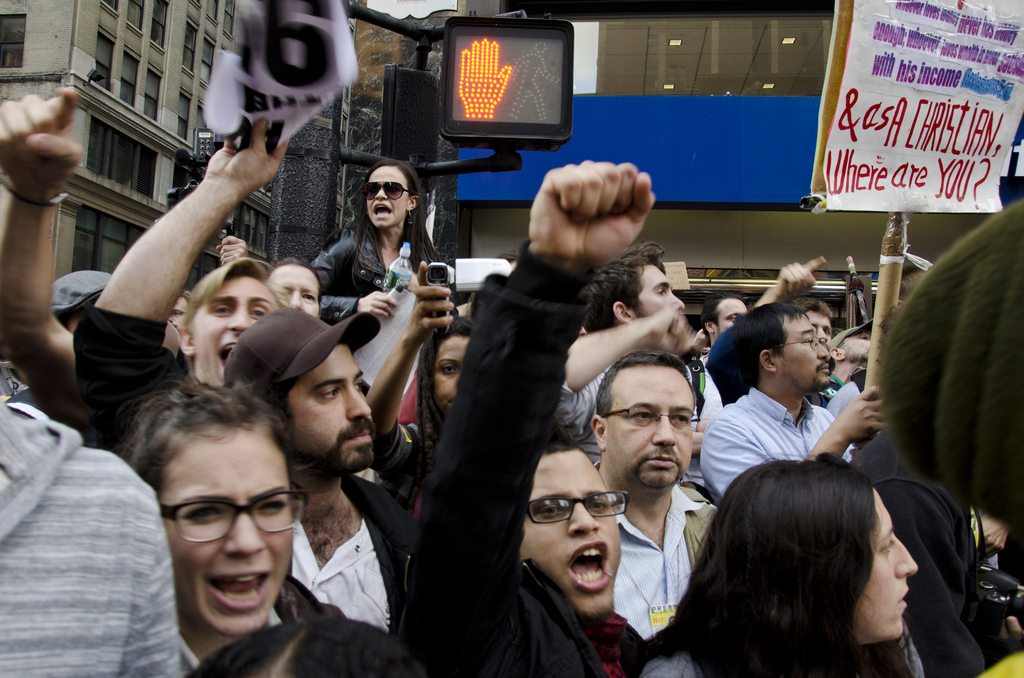 "Federal texpayers bailout money Chase recieved: $94.7 Billion," stats the rally's Facebook page. "Chase has laid off 14,00 workers since the bailout. Chase uses our money to make their profits, but we don't have to let them." Reports soon began floating around of 24 arrests, and video was soon posted on Youtube documenting the incident.

At 12:00PM, an Anti War March made its way uptown from Wall Street, and later in the afternoon, The Malcolm X Grassroots Movement also passed through an old African Burial Ground in downtown, as a protest against racism and discrimination. At around 3:30PM, all the groups that gathered at Washington Square Park marched another two miles uptown towards Times Square, which as far as we know, has never been done before in the history of social activism in NYC. 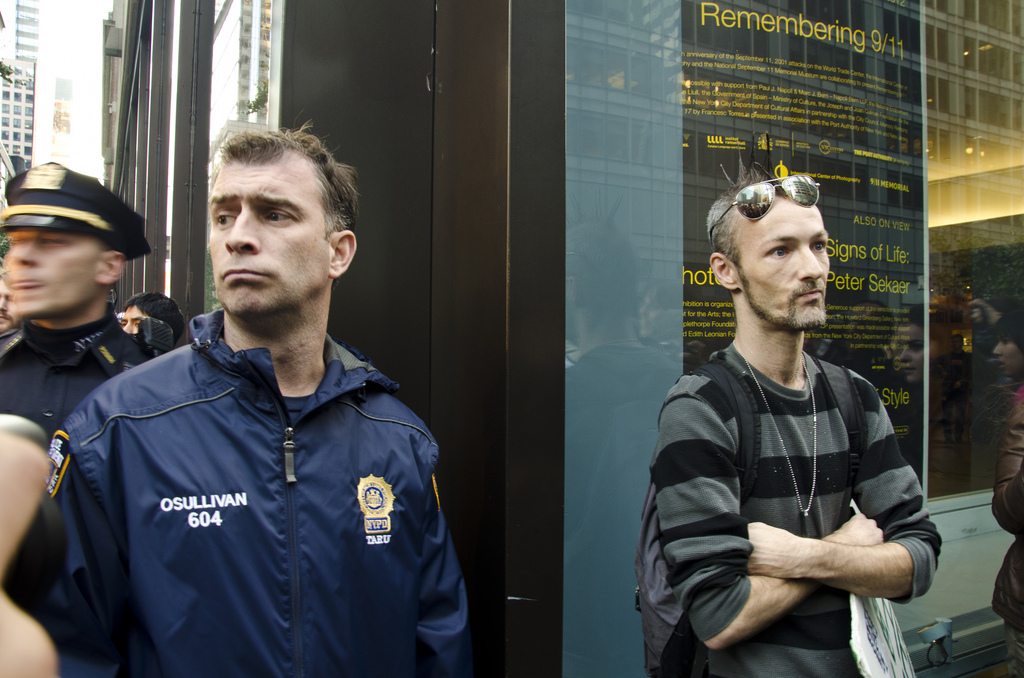 Throughout various points on the march uptown, protestors were either searched or arrested. We witnessed five protestors, along with another protestor getting search as he yelled out "help, the cops are arresting me for no reason!" He was later let go as cameras and protestors gather around.

Police tried to maintain order as traffic was getting blocked around 6th avenue. Protestors chanted "Occupy Times Square", "End the wars, tax the Rich", and "We got sold out, banks got bailed out." A team of legal observers from the NYCLU marched alongside protestors keeping both police and protestors in check.

Once at Times Square, protestors shut down all traffic as police scrambled to barricade the occupiers into designated areas. Police began directing protestors to different streets, barricading others with orange netting. 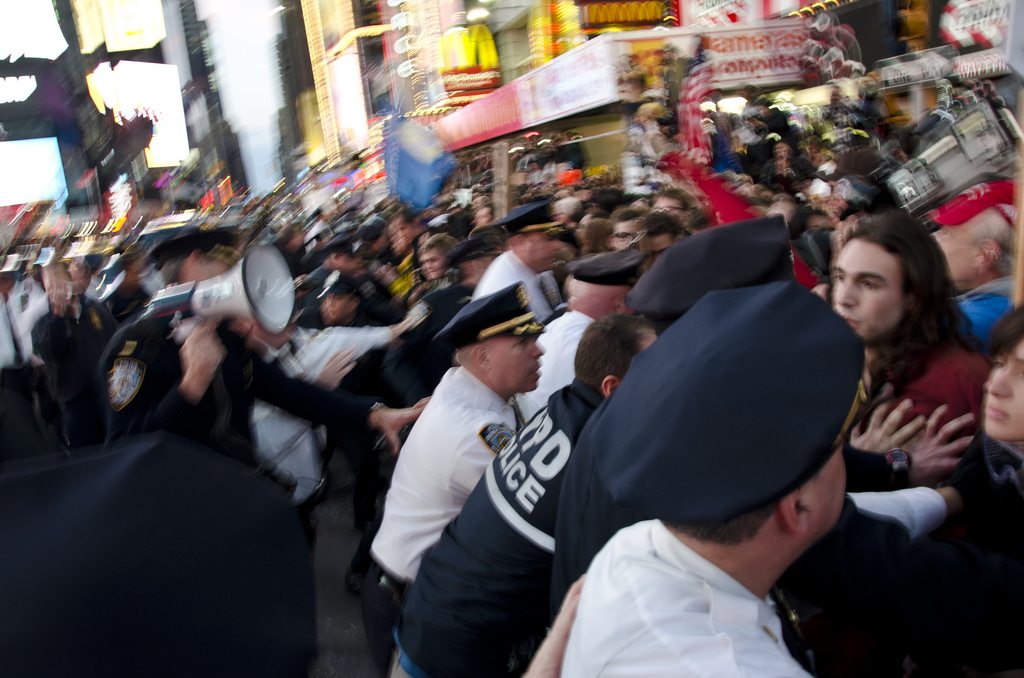 Although the Times Square convergence was relatively peaceful, we did witness numerous arrests by the barricades where we were standing, along with some police and protestors clashing, before order was restored. Protestors chastised the more aggressive among them, chanting "this is a peaceful protest" and "no violence".

Many officers came out in riot gear and horses, which added fuel to the fire. When someone got arrested, protestors yelled "Shame, shame", and "you're one of us" to the police. Word soon spread that the police was asking all journalists and media affiliates to leave areas where protestors were standing. Ralliers claimed this was only being done so that illegal police action wouldn't be documented. 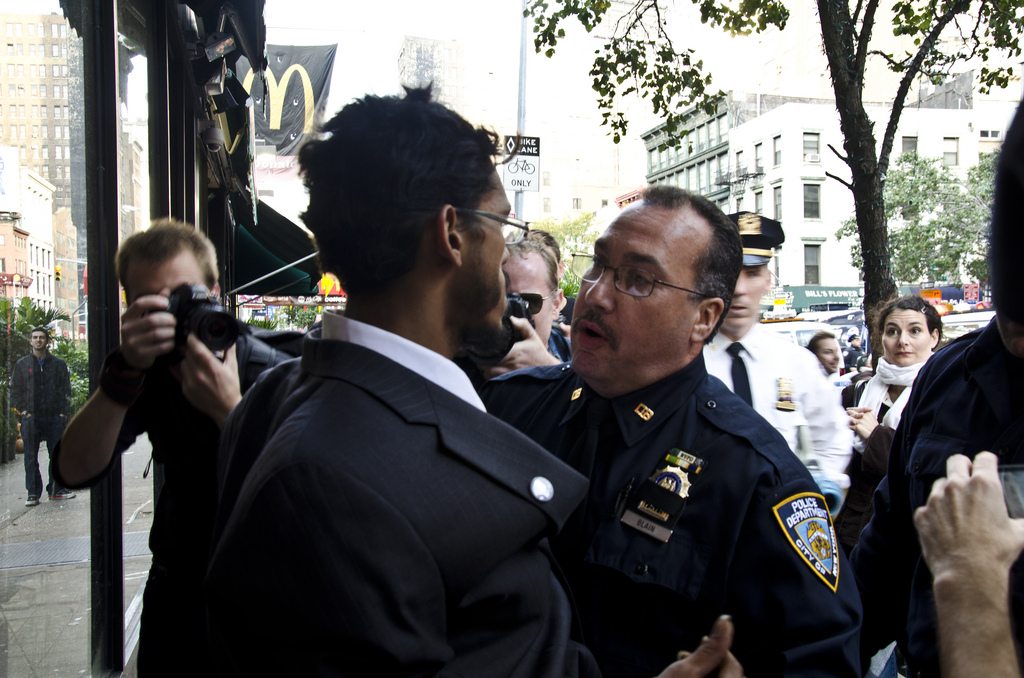 Amy Goodman of Democracy Now, who was in the crowd next to us, decided to stay, and even questioned some of the officers.

Towards the end of the day, an uneasy calm fell over Times Square as traffic resumed and both police and protestors settled in.

For more photos from Saturday, you can view them here on Flickr.