On Monday, the Congressional Hispanic Caucus sent a letter to the U.S. Department of Education Office for Civil Rights expressing "grave concern" over 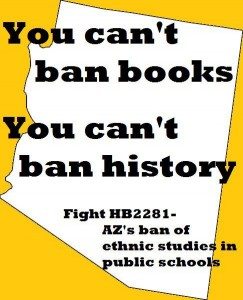 the Arizona Revised Statute §§ 15-112 that subsequently banned the TUSD MAS program. In the letter the Congressional Hispanic Caucus urged the Office for Civil Rights to investigate due to "the language of the statute and its targeted application against the MAS program."

Things just got a bit hotter. Today, El Gallito Rebelde Congressman Luis V. Gutierrez announced on his Facebook page he will be joining the Congressional Hispanic Caucus "in protesting Arizona's book ban today." Everyone knows when El Gallito gets involved, he will not stop until he sees results.

We strongly urge Superintendent John Huppenthal to consider reinstating the MAS program and end this blog with a quote from the CHC letter:

"We believe that A.R.S. §§ 15-112 is bad public policy and fundamentally flawed. Using the law to attack the MAS program, with its proven educational successes, will only serve to exacerbate the already harmful anti-Latino sentiment in Arizona. Arizona is sending the wrong message."