Is the US Latino community going to educate the rest of the nation that Florida Senator Marco Rubio does NOT represent the views of Latino voters? 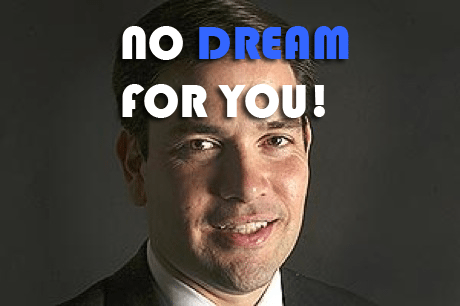 The Miami Herald reported that the NO SOMOS RUBIOS campaign protested Rubio's appearance today in Miami. Here is an excerpt:

In the lead-up to Rubio's speech, critics from a group called Presente Action had a propeller plane circling the Doral Golf Resort & Spa with a banner reading, Hey Marco: No Somos Rubios, which translates to "We aren't Rubios." It's a play on words on the word rubio, which in Spanish means blond or fair. The group is attacking Rubio largely over immigration, protesting that the senator doesn't support the pro-immigrant DREAM Act.

For updates on Rubio's speech once it begins, refresh this blog post.

After saying a few words in Spanish, Rubio, who was greeted by a standing ovation, said he got a text message froma friend telling him about the airplane banner. "Marco, we're not blond," he said, translating the banner. "Which, by coincidence, neither am I — although if I'm in the Senate for another year, I may start being a little bit more gray."

The crowd laughed. Then Rubio immediately went into the issue of immigration — and a couple of suit-clad protesters stood up, raised signs that said "Marco Rubio — Latino or Tea-Partino" and asked Rubio why he isn't helping them. "You're an immigrant yourself!" they yelled.

Rubio appeared unfazed. Security approached the protesters while Rubio said, "I ask that you guys let them stay, because I think that they're going to be interested in what I'm going to say." Rubio got a standing ovation. "I don't want them to leave," he repeated. "I want them to stay."

"Let them stay!" chanted the crowd.

But the protesters were escorted out.

"They came here to a crowd that they know may not be friendly," Rubio said. "I think God that I'm in a country where they can do that.

Then, speaking without notes, an energized Rubio launched into a 20-minute speech his supporters said afterwards was one of the best they have heard throughout the presidential campaign.

"Our country has a broken legal immigration system," he began. "The status quo is unsustainable."

Rubio spoke of bipartisan support for a guest worker system and making it easier for people to obtain U.S. visas. But the policies haven't moved forward, he said, because of politics.

"We must admit that there are those among us that have used rhetoric that is harsh and intolerable and inexcusable," Rubio said. "And we must admit — myself included — that sometimes we've been too slow to condemn that language for what it is."

On the left of the political spectrum, politicians too have been guilty, Rubio said, of setting "unrealistic expectations" to appeal to Hispanic voters.

Is the GOP even going to listen? Only time will tell. Here is what Act.Presente.Org produced: