This is definitely a photo you don't want to open at work, but it is a photo that must be shared, especially if you are someone who believes that this world still suffers from problems of race and hate speech.

The story comes out of UCLA and we heard about it when one of our community members shared it on our Facebook page with the following caption:

A UCLA Latino student's apartment door was tagged up with racist comments. This event should definitely get media coverage. There's a hidden racism on campus and I'm sure it happens on other campuses too. Schools never want to look bad, but its not about that. Its about gaining visibility for the prejudice that affects it's students. 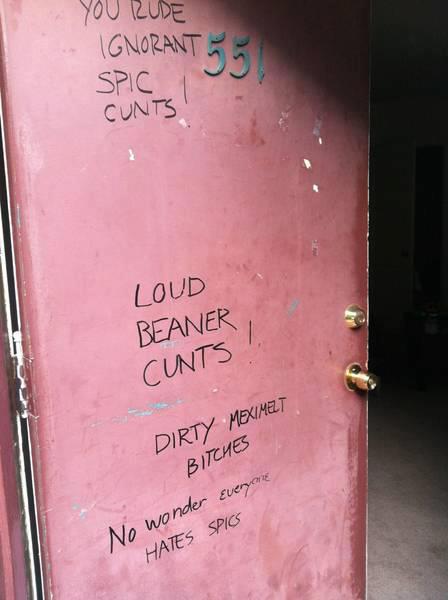 The story ran in UCLA's student newspaper and we pulled some key points from the article. Just like the newspaper, we debated too if we should run the photo, but in the end, we decided to do so, because we wouldn't be accurately sharing the information. This is what the paper reported:

Police are investigating a hate crime that occurred Monday morning when an apartment door was vandalized with anti-Mexican and sexist slurs.

Kristine Phan was leaving the apartment for class when she saw her red door marred by black marker with phrases such as “You rude ignorant spic cunts” and “dirty Meximelt bitches.” The stairs leading to the door and a fence directly facing the apartment have similar writing, said Phan, a third-year psychology student.

“I thought we were here attaining a higher education, and with that, learning to be tolerant of other cultures,” Phan said. “I’m very sad and disappointed.”

Phan said she believes the vandalism was targeted toward her roommates, who are Latino.

The slurs are directed toward a Mexican female, but the two students Phan lives with are a Guatemalan-Salvadoran woman and a Mexican man.

The Undergraduate Students Association Council released a statement Tuesday afternoon to condemn the graffiti. The council will hold campus climate events and meet with administrators to address the incident, according to the release.

Hate crimes often aren’t reported to police, and it is likely there are more hate crimes that go unreported by students, Greenstein said.

“If hate crimes aren’t reported, we’re doing a disservice to people on campus who potentially could be victims,” Greenstein said.