English Translation of Tab Deportes’ Reactions to Statements Made by Mr. Shaquille O’Neal

Here is the English translation done by LatinoRebels.com editors of the original Spanish statement from TAB Deportes regarding disparaging remarks made by TNT Sports analyst Shaquille O'Neal: 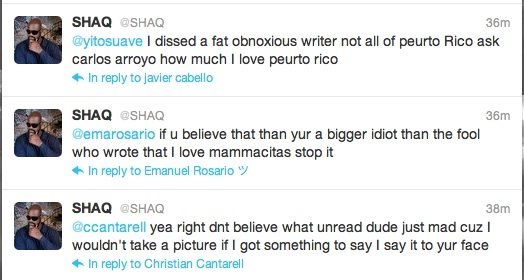 In recent days our news of Mr. Shaquille O'Neal, one of the top 50 NBA players ever, has traveled the world. Tiro Al Blanco (TAB) began some 18 months ago and thanks to God, it has enjoyed steady growth, earning the respect and credibility of many. When TAB's production crew conducted its work plan to cover the entire weekend in the NBA in the city of Orlando, Florida, it was decided we would ask players to give a "shout out" to Puerto Rico and our programming. The reason for this is because we are starting a new phase for TAB, with new magazines and weekly televised sports shows of individual sports. This new content will be become part of the Puerto Rico Sports Networks and Tiro Al Blanco will be producing the,.

Thanks to God, all the athletes that we interviewed gave us that opportunity, all with the exception of LeBron James, the guard for the Miami Heat. Mr. James respectfully express to our own Emilio Pérez that we should talk with his agent to produced the shout out that we asked for. This is the first time that TAB has reported this and at no time did Mr. James treat us negatively. Mr. James is arguably one of the most significant figures in the NBA today.

Soon we will be able to offer a visual of several NBA stars giving a shout out to Puerto Rico and to TAB.

Our intention here was not to create a "Media Tour" of this news with O'Neal, but to inform our fans of TAB Nation of what happened. Emilio Pérez said this very same thing on the radio this week. Had we not reported this news, we would have been guilty of disrespectful silence by not defending one of our founders and even more for not defending Puerto Rico and the entire Latin American community.Our professionalism and credibility speaks for itself.

It is for this reason we have the respect of our peers and major media figures in Puerto Rico and internationally. We appreciate all the support extended to us and we know that this support will continue. We understand that everyone has a right to opinions that differ from ours and respect that. Our website www.tabdeportes.com is supported by income from our sponsors and for that reason it has some applications to generate revenue to it. Without them we could not afford the travel and operating expenses for TAB.

Since our beginning we have had the support of our brothers at El Despelote (the top morning radio program in Puerto Rico) of La Nueva 94, Cerrando la Tarde on Nueva Vida 97.7, WIPR on Máxima 940 AM (where they transmit the TAB Show every Saturday and Sunday from 6 to 8 pm) and the Puerto Rico Sport Network, where we are working together with the the sports channel to provide with 24 hours of local and international programming (with rights).