Before we share Rick Santorum's Thursday comments he made to CNN that defended the position he made to EL VOCERO about how English should be a requirement if Puerto Rico were to become the 51st state of the United States, we wanted to share a meme that we created to give Santorum a history lesson: 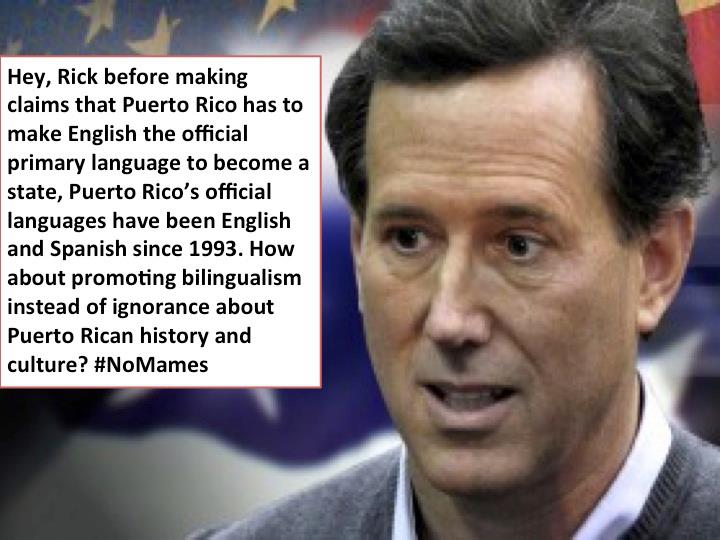 With that out of the way, here is the video clip from CNN where Santorum defends what he said:

It appears that Santorum's informant comments about Puerto Rico, constitutional requirements and vague generalizations about Puerto Ricans has struck home. Several of the island's key leaders have commented. First off, pro-statehood and Republican governor Luis Fortuño, who is endorsing Mitt Romney but also met privately with Santorum on Wednesday and is a friend of Santorum's (yes, we know it is confusing, but stick with us). This is what Fortuño told National Review Online:

But Puerto Rico governor Luis Fortuño tells National Review Online that Santorum’s stipulation “shouldn’t be an issue.” He notes that Santorum clarified his remarks earlier today, saying he wanted island to be bilingual, not solely English-speaking. Fortuño also points out that English is already one of the island’s two official languages, the other being Spanish.

And Fortuño shares Santorum’s sentiment. “As a parent, I can tell you that most of us want our children to be totally fluent in both languages,” he says. “Given all the free-trade agreements [being negotiated] in the region, it makes sense to be at the very least bilingual.” In his most recent State of the State address, he announced an initiative to ensure that no child graduated from Puerto Rico’s public schools without being “fully, truly bilingual.” “And this initiative is supported by more than 90 percent of parents in polls,” he observes.

Puerto Rican Resident Commissioner Pedro Pierluisi, who is a Democrat but a member of the same pro-statehood party as Fortuño (we told you this was confusing), told CNN's Soledad O'Brien the following:

"Santorum's view is narrow and a limiting view of what America is all about," Pedro Pierluisi, a Democrat, said on CNN's "Starting Point with Soledad O'Brien" "English is the predominant language in the U.S. and will continue to be so, whether Puerto Rico becomes a state or not."