Southern Mississippi President Dr. Martha Saunders released a statement addressing the "Where is your Green Card?" chants from their pep band directed at Puerto Rican-born and Kansas State point guard Ángel Rodríguez during the first round of a NCAA Men's Basketball Tournament today: 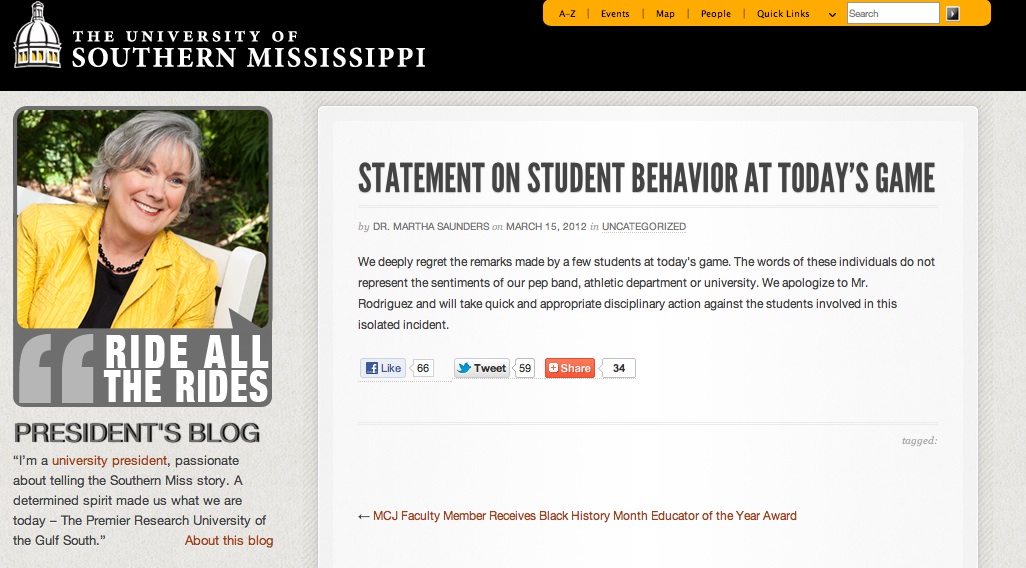 We deeply regret the remarks made by a few students at today’s game. The words of these individuals do not represent the sentiments of our pep band, athletic department or university. We apologize to Mr. Rodriguez and will take quick and appropriate disciplinary action against the students involved in this isolated incident.

A local beat reporter added more details about the incident:

“I want to enunciate to him that the band’s behavior does not represent Southern Miss,” Hammond said.

He also planned to meet with the pep band and counsel them to make sure they understand “that is not who we are.”

Hammond said that he planned on taking the band director to meet with Rodriguez, a native of Puerto Rico, and potentially KSU head coach Frank Martin.

“I want to reach out to Conference USA and anyone else who is impacted by this and take full responsibility for this,” Hammond said. “This does not represent the state or university. This is not acceptable.”

The band director put a stop to the chant and apologized to a reporter nearby who recorded it, according to Hammond.