Today, CNN reported that Kansas State guard Ángel Rodríguez, a Puerto-Rican born American citizen, has accepted the apology from Southern Mississippi's president regarding the "Where's your green card?" chants directed at him yesterday in the first round of the NCAA Men's Basketball Championship. 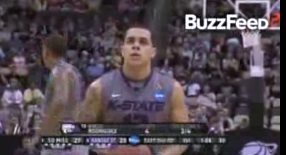 "I heard it. I don't pay attention to that nonsense, especially because Puerto Rico is a commonwealth, so we don't need no type of papers," Rodriguez said Friday. "Their athletic director and personnel from their school came to apologize, and I accepted it."

Rodriguez said he realized that there are "ignorant people, and I know that is not how they want to represent their university."