The Rebels Twitter Interview With Dora The Explorer About @GoddamnDora Spat

This morning, after a parody account called @GoddamnDora started to make fun of the popular Nick Jr show, Dora The Explorer, the official Twitter account of the Dora show fought back this morning on Twitter, asking profiles to report the parody account and block the profile.

The original tweets and story about this Twitter War of the Doras can be read on the following Storify link. 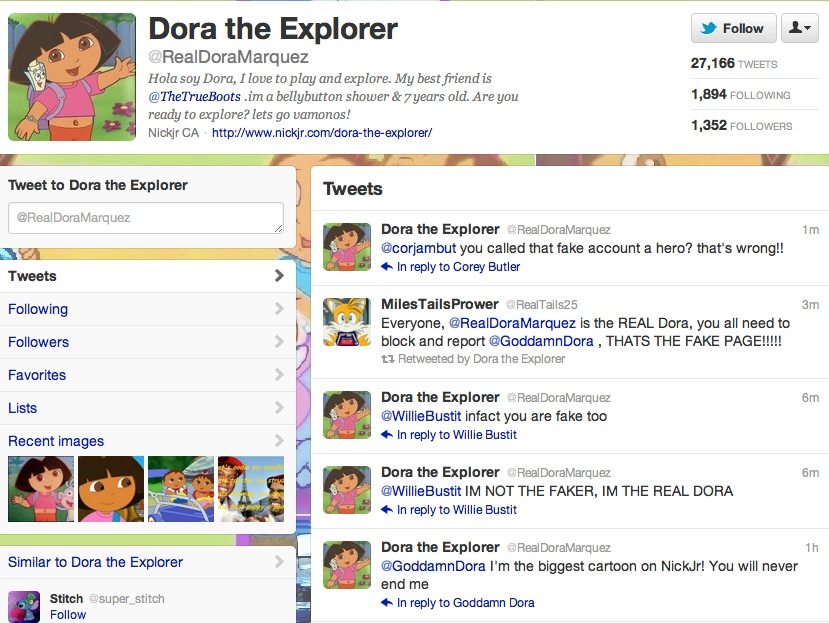 The Rebels Twitter account ask for comment from the Dora Twitter profile that was calling out Goddamn Dora and the profile said we can do a Twitter interview. So we did, and here it is. We have also contacted Nick Jr for comment, and will report that if we get one. But basically, the Dora account tweeted that Nick Jr is aware of the issue (although we contacted NIck Jr three times and haven't heard back from them for comment) and the profile is not worried that its tweets will create any problems with their audiences. By the way, the show has several characters as Twitter profiles like Boots, Diego, and Alicia, and their official show account hasn't tweeted since 2010. Yet this Dora account does not have a verified account and there is speculation that this account could be associated with Caitlin Sánchez, the former voice of Dora, who in 2010 has a very public legal battle with Nickelodeon.