TUSD Spokesperson: Hicks Acted as an Individual on @TheDailyShow, Not as a Board Member

In response to last night's The Daily Show segment, where Tucson Unified School District board member Michael Hicks offered some rather bizarre interpretations as to why TUSD decided to ban the academically successful Mexican American Studies program, a spokesperson for TUSD emailed a brief statement, when we requested comment from TUSD and its superintendent Dr. John Pedicone. The following is the email response we got from Cara Rene, TUSD's Director of Communication and Media Relations:

Michael Hicks is a publicly-elected official and was speaking as an individual. His comments do not represent the TUSD governing board or the school district.

If you want further comments, you will need to seek them from Mr. Hicks. 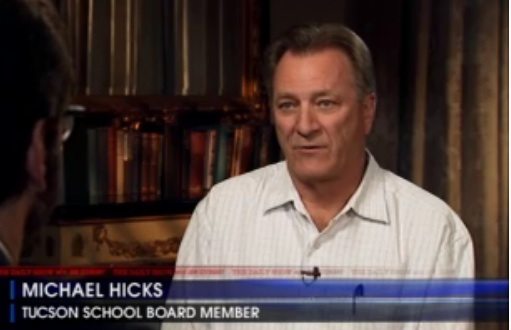 We followed up with a clarification to the email we received from Ms. Rene, reminding her that we did get a comment from Hicks, but that we would welcome additional comment from Dr. Pedicone or any other members of TUSD's governing board. As of this initial posting, we have not received any additional responses from either TUSD or Hicks.

As for the national TV appearance by Hicks, we have this question, which we posed to Rene: If Hicks were speaking as an "individual," why did the segment identify him as a school board member of TUSD? The fact remains: a publicly elected official entrusted to best serve the education of children in Tucson offered rather questionable explanations as to why the MAS program was being banned. According to the interview, Hicks based his vote on "hearsay" and seemed a bit troubled that TUSD teachers were tempting their students with free burritos. Finally, besides calling Rosa Parks "Rosa Clarke" on national TV, Hicks also freely admitted that the Arizona ethnic studies ban was passed only for the MAS program in Tucson. Other similar ethnics studies programs are still active.

School boards and school leaders are public servants of the community. We find it puzzling that in this case, because a comedy news show portrayed the district in a negative light, TUSD leaders choose not to comment nor offer additional explanations about an interview on national TV. Hicks, as the member of a publicly elected school board (see the screen shot above) presented bizarre and unfounded opinions about how a program that has helped Arizona students is being dismantled because of a few publicly elected officials don't agree with the program's vision and used the power of the Arizona legislature to create division in their own community.

We will welcome any official TUSD response at any time and we promise to publish it unedited, but right now, avoiding the issue only makes it worse, in our opinion.

2 responses to “TUSD Spokesperson: Hicks Acted as an Individual on @TheDailyShow, Not as a Board Member”