Today, the US Supreme Court will be listening to oral arguments for and against the Arizona law.

“I apologize for Arizona’s actions toward the Latino community," said the former Democratic senator.

“I would submit to you that Senate Bill 1070’s true intention … is to make second-class citizens out of Latinos,” Gallardo said.

And of course, kudos to Russell Pearce (yes, former state senator Russell Pearce), who is the chief sponsor of SB 1070. At least he showed up to share his opinions, which, as you all know, we don't agree with. New York Senator Charles Schumer and Pearce had an interesting exchange, to say the least. 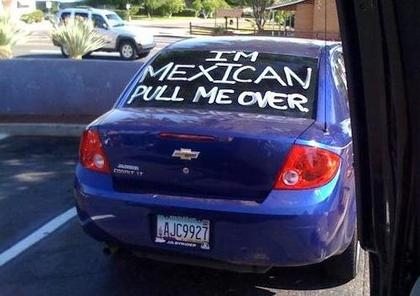 Here is a partial transcript:

SEN. SCHUMER: OK. I want to show you a blowup of the official training manual given to the Arizona police officers on SB 1070. Behind me here on the screen are the factors that training say police may consider in developing a reasonable suspicion that a person is an illegal immigrant and needs to be checked. I'm going to highlight a few. It says in the company of other unlawfully present aliens. It says the vehicle is overcrowded or rides heavily. It says dress. And then it says demeanor, for example, unusual or unexplained nervousness, erratic behavior, refusal to make eye contact.

MR. PEARCE: Mr. Chairman, that was put together by AZ POST, and I understand they worked in cooperation with ICE to develop the profile of those folks after making legitimate contacts.

SEN. SCHUMER: But explain to me, as the author, do you think dress is an appropriate —

MR. PEARCE: Mr. Chairman, this is not — this is from AZ POST. This is training material for AZ POST, not a part of the bill.

MR. PEARCE: Right, not a part of the bill.

SEN. SCHUMER: I understand. Well, do you think dress is an inappropriate measure? Is there a reason to stop somebody because of their dress?

MR. PEARCE: I think when you have a problem —

SEN. SCHUMER: And then, I would ask you if it's not inappropriate, what does an illegal immigrant dress like?

MR. PEARCE: Mr. Chairman, almost all — when you train a police officer — I've been in this business for a long time, in law enforcement and public safety — it's a compilation of issues that tend to raise the level of suspicion to the level of probable cause, not any one isolated incident. This is just a list of things that lead you to ask questions. I know questions are dangerous things. People might not actually give you an answer. So —

SEN. SCHUMER: Sometimes questions are a dangerous thing because they lead to profiling.

SEN. SCHUMER: And it seems to me when the word dress is used — I mean, just give me a — do you — in your experience, you've lived in Arizona your whole life, I believe?

MR. PEARCE: But I want to tell you this is a list of things to look for and they're trained by ICE. This was ICE training in terms of a compilation. But it's like anything —

MR. PEARCE: No one issue does — if I'm looking into a bank robbery or a Circle K robbery and I've got a description kicked out by radio of a white male, average height, white t-shirt, dark pants running down the street; I'm responding to that crime and a I see a white male, white t-shirt, dark pants that turn out to be jogging pants. I stop him and I have a pretty good reason to ask him a few questions.

When I get to the Circle K and I find out he's not the guy, he gets released. You have to respond to reasonable suspicion to do your job, Mr. Chairman.

MR. PEARCE: And this is just a list of things to look for.

SEN. SCHUMER: Right. First, I don't believe ICE sanctioned the use of the word dress. We'll check that out.

MR. PEARCE: I'm just told that that's what they worked with in cooperation with developing of that criteria, Mr. Chairman.

SEN. SCHUMER: OK Right. So let me ask you this question. Instead of going through these criteria and other criteria, why didn't you just say — and again, the criteria are not yours, the Arizona police, as you say. That's what we say up there — mandatory check.

But why didn't you just say that everyone who is stopped by police has to be checked for legal immigration status? Why do you require the police to form opinions about whether a person is an illegal immigrant first before requiring police to ask that person for proof of legal status? Doesn't the way you wrote the law either require or certainly invade towards racial profiling?

MR. PEARCE: Just the opposite, Mr. Chairman. Again, under federal law — you know, under the U.S. Constitution and the Arizona constitution you know, we have the Equal Protection Clause. I knew those kinds of issues would be raised by those open border folks that are against any enforcement.

We've been sued on everything we've done, from voting fraud to stop voting fraud, welfare fraud, to going after illegal (person who compete ?) illegally, immorally, and have a competitive advantage over the honest employer. Doesn't it seem like no matter what we do, Mr. Chairman, we're attacked for simply enforcing the law and trying to protect American citizens and jobs for Americans. So you knew those questions would be asked, you knew you'd — they'd come after you. We simply wrote the bill to preempt those kinds of silly arguments and try to protect — try to protect everybody's rights. As a civil libertarian, I'm a believer that everybody — you have to have a reason to do stuff. I don't want a police state. I want a reason to do something. That's why those — that's why that bill was written in the manner it was written.

SEN. SCHUMER: So let me ask you again. If you want — why wouldn't it have done just what you say, rule of law, not discriminate — why wouldn't it have been better to say that everyone stopped by the police should be checked for their status? Why come up with obviously a really problematic definition of suspicion? And you've seen in the regulations that it is problematic.

MR. PEARCE: Well, Mr. Chairman, I don't agree that it is problematic. In Arizona, first of all, we made the proper exceptions. If you have an Arizona's driver's license or a driver's license from a state that requires proof of citizenship or legal residence, you're automatically exempt from that. That is — that is — (inaudible) — at that point, reasonably, that you're legal. All we wanted to do in this bill is common sense.