Where is the outrage? Two weeks ago, PBS broadcast the following video (over 100,000 views on YouTube) that shows US Border Patrol agents beating Anastasio Rojas, who died a few days later from his injuries.

As a result of this tape, calls for the US Department of Justice to initiate an investigation began to mount. Just days after the video's release, a Presente.Org petition reach over 30,000 signatures. Yet, two weeks later, very little media attention has occurred. To many, the Rojas video is almost Rodney King-like (law enforcement officials were not aware that a video was recording their actions), yet people are still silent. 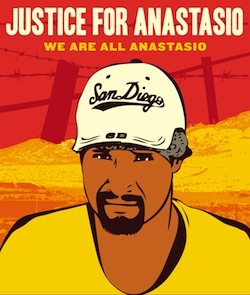 I have been a resident of Los Angeles for 25 years. I remember the Rodney King video. I remember the reaction from the community and the press coverage and of course I remember the riots. Rodney King survived his brutal beating and today, he speaks out against racism and police brutality. Anastasio Hernandez Rojas did not survive. He left behind his wife, Maria Puga and five children. Since his death nearly two years ago, Maria has attended numerous press conferences and has helped to organize rallies and marches all in the hope of receiving justice. She is not a professional spokesperson. She doesn't speak English. She is a widow and spends most of her time working and struggling to raise her children. A few strong organizations like the Southern Border Communities Coalition, Presente.org and American Friends Service Committee have taken up her cause but where is NCLR, MALDEF, LULAC and NALEO? Where is the Catholic Church? Where is the Hispanic Caucus? These organizations have been powerful advocates for the Latino community in the past but so far have remained silent about the homicide of Anastasio Hernandez Rojas.

Last week, protests occurred from Boston to Los Angeles. They were covered by the HuffPost, but the rest of the media is quiet.

Where is the outrage? When will the nation wake up? Or does it even want to wake up?

PS If you want to contact the DOJ directly, you can do the following: DOJ Main Switchboard 202-514-2000 or email them at AskDOJ@usdoj.gov.