As the US DOE’s Office of Civil Rights Files a Complaint Against TUSD, Tensions Continue to Mount

Last week the US Department of Education's Office of Civil Rights filed a complaint against the governing board of the Tucson Unified School District, the latest in a series of events that continue to gain national attention, from book bans to Daily Show appearances of TUSD board members. 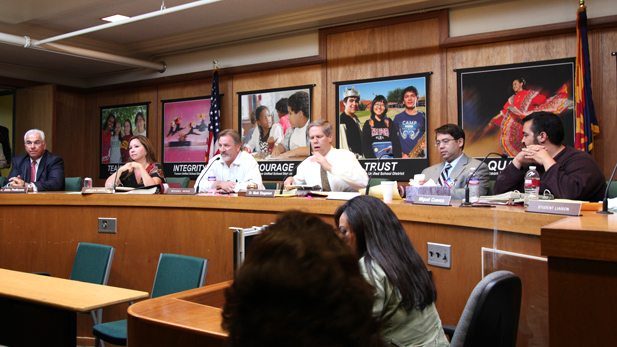 Here is what the Arizona press is saying about the complaint, as well as a local news segment:

The U.S. Department of Education's Office of Civil Rights is investigating TUSD's treatment of Latinos at Governing Board meetings.

A complaint filed against the district alleges that it discriminated against Latinos by attempting to limit their participation at board meetings that have been of particular interest to the Latino community.

It has also been alleged that the Tucson Unified School District discriminated against minority individuals with limited English proficiency by failing to provide them with access to district board meetings, the district's website and board policies. The Tucson Unified School District confirmed Friday that it received the complaint, but said it had been forwarded to outside counsel for review, as is district practice with these type of complaints.

Further details about the allegations, to include who filed the complaint, were not available as the investigation is ongoing, the U.S. Department of Education said Friday. According to the Three Sonorans blog, the complaint was filed by the nonprofit Civil Rights Center Inc., which is headed by Silverio Garcia Jr.

Efforts to reach Garcia on Friday were unsuccessful. Phone numbers associated with Garcia were disconnected and a website connected to the Civil Rights Center of Phoenix did not work.

The tension continues to mount at TUSD, so much so that Three Sonorans founder DA Morales, a fervent critic of the TUSD board, made his first public comments in front of the TUSD board. The video is below, but we shared the following words that Morales said at the end of his remarks:

One response to “As the US DOE’s Office of Civil Rights Files a Complaint Against TUSD, Tensions Continue to Mount”