It’s often said that there’s nothing more American than baseball (much to the chagrin of apple pie). We’re not sure if that line was cobbled together in a public relations meeting but it does hold some weight when one considers how some aspects of the history of the sport mirror historic developments in the country. The story of the Negro League and Jackie Robinson’s assimilation into Major League baseball is similar and a part of the larger story of civil rights in the U.S.A.

It’s along these lines that the Latino Baseball History Project was created. The project, originally a by the Baseball Reliquary and California State University Los Angeles as the exhibit “Mexican-American Baseball In Los Angeles: From The Barrios To The Big Leagues,” traces the history of Latino baseball during the days of segregation in the 20th century. More importantly, it highlights how these independent leagues helped create a number of civic leaders, educators and professionals who fought against segregation.

I had the honor of speaking with Mark Oceguedo, co-author of the project’s latest book, Mexican-American Baseball In The Inland Empire. The book reveals the lost history of the Mexican-American baseball league that thrived in the southern California counties of San Bernardino and Riverside during the early/mid-20th century via photographs.

Oceguedo was an undergraduate at California State University San Bernardino where the LBHP collection resides when he began his research into the local Chicano community of San Bernardino as a McNair Scholar. His research led to his involvement with the LBHP’s first pair of book releases, Mexican-American Baseball In Los Angeles as a research assistant and as a co-author on Mexican-American Baseball In The Inland Empire while a graduate student at UC Irvine. 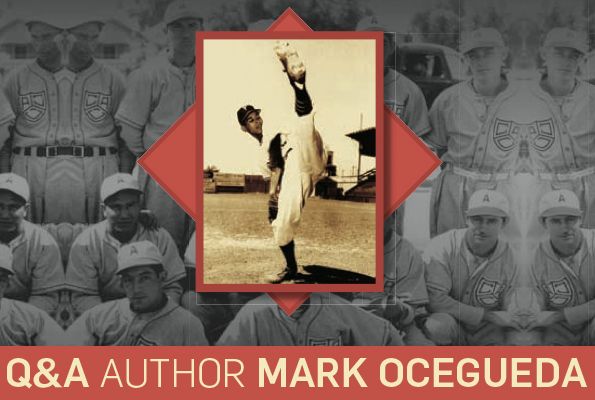 BASEBALL PROVIDED THIS VENUE FOR A LOT OF MEXICANS, MEXICAN-AMERICANS IN PARTICULAR, TO DISPLAY POLITICAL MESSAGES AND SOCIAL MESSAGES.

What exactly was your role in the creation of the book?

Richard [Santillan from Cal Poly Pomona] and I did the bulk of the research. A lot of the research also fell on me, particularly on getting photographs from former players and their families. Richard and I worked on getting those photographs together and compiling them into their own geographic chapters. For example, we did a chapter on the San Bernardino Valley and that consists of the communities of San Bernardino, Colton, Highland, Redlands, etc. We also broke it up into themes of transnational baseball and professional league.

I met with a lot of people. I would go to their homes or meet with them at the university to do oral histories with them. They would donate their photographs to the Latino Baseball History project and we would take those photographs in their respective chapters depending on where they were from.

It was a great project [to work on]. It’s very important because it’s a public history and it’s more accessible to those who are not interested in scholarly monographs or academic books because it’s accessible to a wide range of people that are interested in having a brief history of their community, a history of baseball and what it meant to Latinos especially during that era of segregation. Most people that I talk to that weren’t involved in the baseball movement just didn’t know that this was going on. To help bring this history out of the margins is very important because this was a very big deal to the community back then.

Everyone is familiar with Jackie Robinson and the Negro League but even I as a Mexican-American from California never knew this league even existed until I learned about the history project last year.

You’re exactly right. Most people know about the Negro League, Jackie Robinson and the color barrier but these books and this project really complicates the idea of the color barrier because it’s not just black and white. Race isn’t that polarizing in American history, it’s a much more complicated thing than just black and white and I think these books really show that. The racial barrier is much more complicated…and there were Mexican leagues in the Southwest, in California, in Texas, even parts of the Midwest during the time of segregation. I think that this is going to be a very important topic of historical inquiry within the next few decades or so because, really, it hasn’t been covered. The only scholars that I can think of are Sam Regalado and Jose Alamillo that have done historical research on these teams.

The 1950 Casa Blanca Stars of Riverside

One of the great stories in this book is of a team from Riverside from the Casa Blanca barrio. This team was comprised of various World War II veterans. All of them may not have been World War II veterans but there were definitely some that [were] and when they would play teams that were mostly Anglo, they would wear their military belts on the field to display to their opponents that they were deserving of equal rights, that they were deserving of full civic membership. They would show these belts while they were playing to show that we served in the military and we gave our blood overseas so we deserve full citizenship back home. These discriminatory polices and segregation that we live through on a daily basis is something that should not be tolerated. Baseball provided this venue for a lot of Mexicans, Mexican-Americans in particular, to display political messages and social messages.

Another great story is of Camilo Carreon from Colton. He became a pioneer for Mexican-Americans in joining professional major league baseball. He became one of the first during the 1950s to join the Chicago White Sox. He was an All-Star standout at Colton High school and he became the catcher for the Chicago White Sox. His son eventually played in the major leagues as well, Mark Carreon.

Are you familiar with the events at Dodger Stadium, Viva Los Dodgers, that celebrate Latino culture? It’s a nod to the team’s and city’s Latino population but it’s not very deep or profound from a historic perspective.

The Dodgers have a very rich history and very complicated history with Latinos with Chavez Ravine and Fernando Valenzuela so I think, right now, a lot of major league teams know that their markets are Latino people. You even see it with the Angels and how they’re marketing [Albert] Pujols.

We know teams out there are interested and they know that there’s a history behind these teams but, you’re absolutely right, I don’t think they understand to the extent how important it was to these barrios and to these communities.

You mentioned earlier how baseball helped the war veterans speak out socially and politically. In what other ways did these teams help people in their communities?

There were a lot of former baseball players in this book that we highlight that got organizing skills from the sport. Their experiences playing baseball within these segregated teams gave them leadership skills that they couldn’t have learned anywhere else.

For example, there’s a man by the name of Cruz Nevarez and he played baseball for the Mitla Café in San Bernardino in the 1940s. Nevarez fought in World War II, he played for this segregated baseball team, he learned a lot of leadership abilities from baseball, became the first Mexican-American school teacher in San Bernardino in the 1950s, [and] formed a community service organization known as the CSO, which is a much-written about organization in Chicana historiography. He worked directly with Fred Ross in the 1950s. Ross was the person who started the CSO organization in southern California. He helped Cesar Chavez become the leader that he became with the UFW by introducing Chavez into the CSO and…Navarez worked directly with Chavez and Ross.

Another example is Candelario Mendoza and he has a very similar story as Cruz Navarez. Mendoza became the first Mexican-American school teacher in Pomona. He was also a DJ at a local dance hall called Rainbow Gardens and he would hold music events and dances for Latino people. He learned a lot about organizing and leadership abilities through baseball as many other did.

We even have congressman Joe Baca in this. He played for a team called the San Bernardino Aztecs or San Bernardino Indians but, the point is that Baca played baseball as well. It’s not a coincidence that these former baseball players are going on to become leaders in their community.

You’ve covered Los Angeles and the Inland Empire. What comes next for the project?

Professor Santillan has been doing research on Orange County for the past nine months to a year already. He plans to do as many books as he can to cover different geographic areas in California. This project is wide in nature. At first, it started off as just Los Angeles but when Dean [Cesar] Caballero brought it to Cal State San Bernardino, he expanded the scope to southern California. Now we’re trying to look beyond California. Maybe  somewhere down the line we can start looking nationwide because the Latino Baseball History Project is really, to my knowledge, the biggest scholarly archive on Latino baseball in the United States.

Within my own laptop, I think I have the largest photographic collection of segregated Mexican-American baseball leagues. They’re great photographs. We have [photos of] teams playing teams from Mexico. We have players that were born here in California that would go to Mexico and play in the Mexican league so there’s that transnational connection. It’s very large in nature given the migration narrative. There are teams here but given their connections to their homeland, Mexico, they have the ability to go back home and also play. It’s not just a U.S. history but a transnational history as well.

Mexican-American Baseball In The Inland Empire is now available for sale. Visit the Latino Baseball History Project’s website for more information on the exhibit, archive, future projects and upcoming events.