Yes, we know that American Apparel is no stranger to controversy, and yes, we know that in this day and age, when you see something dumb, our critics will just say that we are overreacting and giving the brand extra marketing. We got it. Thanks. But still, after reading a piece from Colorlines (which came from Gawker) today about a tweet from @fahimanwar over the weekend, we are left scratching our heads about what the hell American Apparel is trying to do.

Here is the screen capture he made: 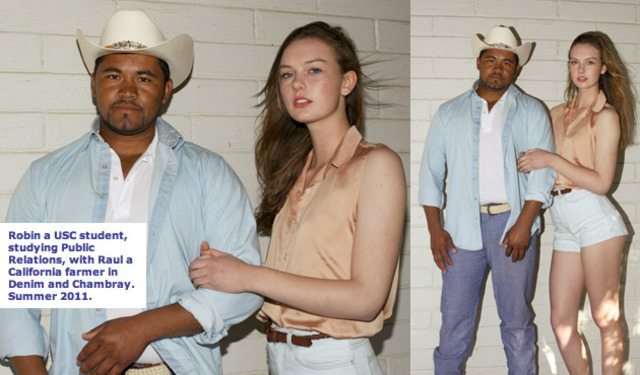 Colorlines (a page that we have major love and respect for) then added a but more info about the ad:

“Robin a USC student, studying Public Relations, with Raul a California farmer in Denim and Chambray,” reads the caption under the image of a Latino man and a young white women holding on to his arm.

“American Apparel has officially lost their minds,” Anwar wrote in his tweet.

There is something that feels off in the ad that stars Raul and Robin. Both subjects don’t look very uncomfortable with each other and as a result both subjects look like props.

American Apparel has been widely recognized as an ally in the immigration reform movement even after working conditions in their Los Angeles factory have come under question. The company’s signature white T-shirts with the phase “legalize L.A.” are a staple at immigration protest in Los Angeles and until 2009 the company hired undocumented workers that according to the company were paid a living wage. However, in September 2009, after a long fight with ICE and threats of a raid, the company fired 1,800 undocumented workers.

Still something feels off with the ad. Maybe it would of been better if they had taken both subjects in to the studio and shot them behind a plain backdrop like American Apparel does with most ads and included a caption about agricultural workers and how they’re paid so little that chances are they can’t even afford a plain $18 American Apparel t-shirt.

Our take: Why did Raúl have to be in a farmer getup in the first place? Are they a real couple or just two people who posed for a fashion catalog? Can't he just wear off his Legalize L.A. tee instead? That would have been cooler, more powerful. Just have a picture of a guy chilling with his model girl? Why, you don't think that is even possible? Nah, because you know us Latinos. Gotta always be in our farmer denim all the time. No mames, American Apparel. Don't force your diversity on us.

UPDATE: Here is the context of the print ad and the image. What is interesting to note is that the print ad gives you a context, while the online image never did. 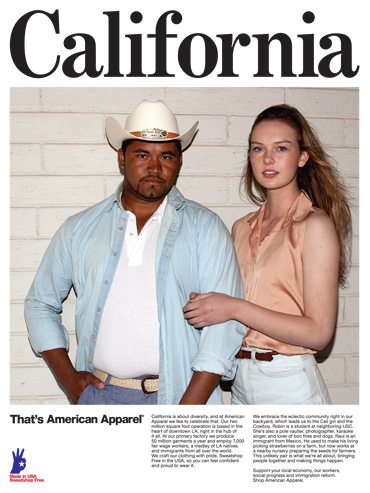 And here is a blowup of what the ad says. "Here's to the unlikely pair." Where are all the "other" unlikely pairs? Why choose these two? How about 20 unlikly pairs? Still a NoMames, even though AA is trying to celebrate diversity.