Yeah, Arizona Secretary of State Ken Bennett, Romney’s State Co-Chair, HAS to Be a Birther

There is no other possible explanation as to why Arizona Secretary of State Ken Bennett has gone on record to say that it would be "possible" to officially remove President Obama from the Arizona ballot since Bennett has yet to get a yes or no answer from Hawaii and he is concerned that he hasn't gotten an answer from them in eight weeks. Bennett is Mitt Romney's campaign co-chair for Arizona. Talk about staying unbiased.

This is what Bennett said on a radio show last week in Phoenix:

If Hawaii can't or won't verify a very simple request, which is contemplated in their own state laws, that for other government officials in other states who have a need to know, just answer the question, yes, do you have a birth certificate for this guy? If they're not willing or can't do that, we might have some other thinking to do….I am just stunned that they are making this so hard. 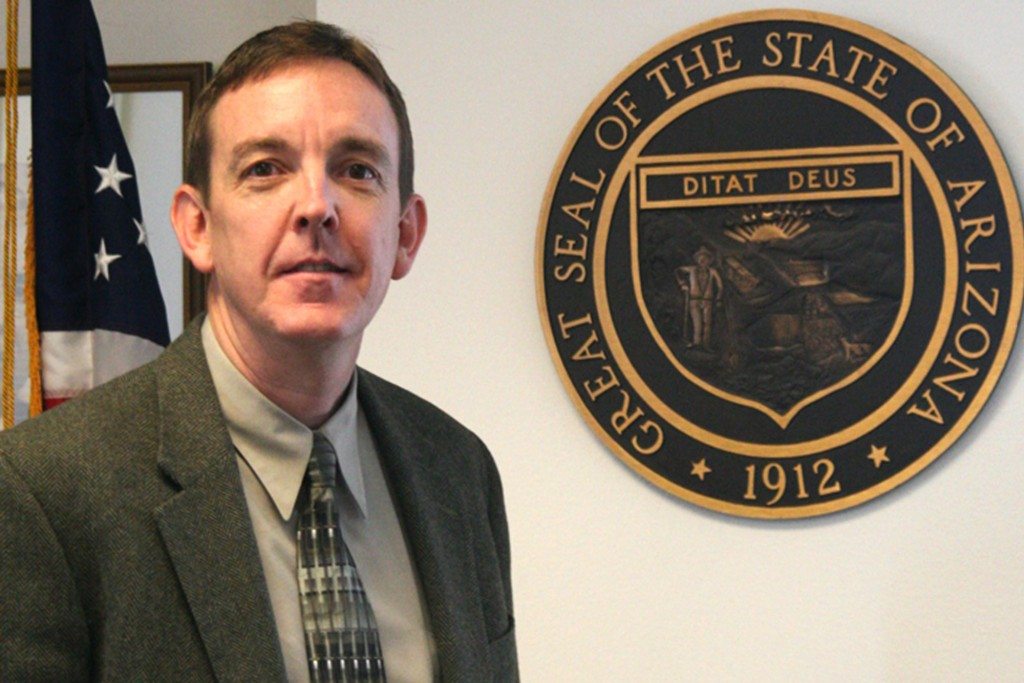 Well, Hawaii has answered him back, as this local Arizona report shows:

The Hawaii attorney general’s office has reportedly told Bennett that there are steps he needs to take in order to confirm President Obama’s birth records.

Those steps include Bennett proving that he legitimately needs confirmation in order to update the records at his office.

Bennett recently said in an interview with KFYI that he had asked Hawaii to further verify the President’s birth.

Bennett said he would consider removing President Obama’s name from the ballot during this year’s presidential election if Hawaii didn’t fulfill his request.

Bennett stated that he is not a “birther,” and believes that President Obama was born in the United States.

He went on to explain that he had received about 1,200 emails from Arizona voters who are concerned about President Obama’s birth records, and felt it was his duty to follow up.

So, there, Bennett says he is not a birther.

Need more proof? Check out the excellent reporting by TPM this week. The TPM reporter just asked for public emails between Bennett and Hawaii to be sent to him. And TPM published it as well as some of the email requests Bennett got from Arizona residents.

Here is just a sampling of what TPM reported:

“Hello Jill. I just left you a brief voice mail message,” Arizona Deputy Secretary of State Jim Drake wrote in an email to a Hawaii attorney on May 1. “I am wondering whether you can give me a ballpark timeframe on our request. As you know, the closer we get to November, the more my phone rings. I believe that having Hawaii’s response on hand might help to quell the inquiries!”

Deputy Attorney General Jill Nagamine’s response? “We need more information to substantiate that you are eligible to receive verification.”

In an interview with the Associated Press late Friday, a spokesman for the Hawaii attorney general said Bennett still has yet to show that he legitimately needs a verification of Hawaii’s birth certificate despite numerous emails back and forth.

Hawaii officials have plenty of reasons to push back. Birtherism is a conspiracy theory fueled by a fringe group of writers and activists unwilling to believe Obama is a natural born citizen and therefore eligible for the presidency no matter how much evidence they get. The effect is that Hawaii has been overloaded for years with requests for verification of the president’s birth certificate, getting as many as 50 new requests a month.

Hawaii officials have passed laws and filed sworn affidavits to deal with the matter. The White House has even gone as far as to release a copy of the president’s long-form birth certificate to the public. Yet requests like Bennett’s still keep coming.

But what can Bennett do when he gets emails from these? (Thanks, TPM). Why would he just want to say hey, we are not going to pursue this? Because in the end, Bennett is a birther. No other explanation.

It offends and saddens me that anyone would characterize me as having “little interest” in the electoral eligibility of the President. Nothing could be further from the truth.

I have personally met with Representative Seel, Jeff Lichter, and many others on multiple occasions. After considering the various options when we started working on this two or three years ago, I have consistently suggested what I believe is the best action: establishing a special private right of action in state law allowing any Arizona elector to challenge a presidential candidate’s qualification for office under expedited time frames in the courts. Ironically, I think that, after trying several other approaches, that’s what was most recently proposed in the Legislature by Carl. As the filing office for statewide, legislative and federal offices, our office does not have the resources, nor would I think it appropriate, to verify filings other than for elements that can be determined on their face: number of signatures submitted, completeness of documents, formation of committees, etc. Only in the courts can subpoena power, rules of evidence, and other judicial tools compel the production of and give impartial consideration to evidence on both sides.

Having said that, there are things we have been and are doing to insure the integrity of our ballot. First, we have revised the nomination forms and informed the parties that we will not include a Presidential or VP candidate on the ballot unless the candidates personally swear to meeting the itemized qualifications required in the Constitution. (In 2008, the Democrat nomination form simply said that their candidates had been “nominated” at the Party Convention)

Additionally, I have asked the State of Hawaii for a “verification in lieu of a certified copy” of the birth record of President Obama, as contemplated under HRS 338-18. This action was prompted, in large part, by constituents here in Arizona who wanted me to do whatever I could to verify the President’s eligibility. If the State of Hawaii does not confirm that he was born in Hawaii, his name will not appear on Arizona ballots.

From the tone of your letter, I assume you have personally concluded that Barack Obama is not qualified to hold his office, so the above actions probably fall far short of your desired outcome. However, I am doing what I think fulfills my oath of office based on the rule of Law. If you disagree with my past or future actions, you can obviously seek judicial review in the Courts.

Subject: RE: Your Oath of Office, Ken?

Dear Brian, Tom, and All,

Thank you for your emails seeking resolution to President Obama’s qualification for office and, therefore, his right to be on our ballot. In your calls for me to make sure he follows the law and is “subject to the same rational and reasonable standards as every other citizen”, it is imperative that we follow the rule of law as well.

Arizona law requires an individual to file nomination papers wherein they certify they meet the qualifications of the office sought and have met other requirements such as committee formation and signatures. We review elements in the filing that can be verified on their face (completeness, numbers of signatures, etc.). Challenges to the remaining facts in the filing (validity of each signature, residency and other qualification aspects) are solely brought through legal process in the courts.

Because of the importance and profile of the President’s case, and at the request of many constituents, I have gone the extra step of asking the State of Hawaii to verify the facts contained in his birth certificate. Hawaii is bound by their own statutes to provide such verification to other state officials in their official duties and, to Brian’s point, I do not believe they can avoid their duty to me under a criminal investigation loophole because I am not investigating them.

The fact that Obama certified his citizenship on the 2008 PPE form is irrelevant to me because Arizona does not grant its electoral votes in the PPE. I believe there is significance in changing our nomination form for the actual election to include the certification.

With all due respect, the MCSO investigation has not proven anything other than raised probable cause that the birth certificate posted on the Whitehouse website “may be” a forgery. The next lawful step would be for the Sheriff’s office to turn their findings over to the County Attorney for prosecution. Evidence would be brought on both sides and a judge should issue a decision. Whether or not that happens, if Hawaii can’t or won’t provide verification of the President’s birth certificate, I will not put his name on the ballot.

I can tell from the tone and language of your letters that the only acceptable outcome for you is that his name not be on the ballot, period. That may be what happens, but under my watch, it won’t happen based on opinions, petitions, probability or pledges to support or oppose me in the 2014 Governor’s race. My oath of office is to uphold the Constitution and laws of our State and country, and I’m going to do that by following the law. I look forward to continuing to work this issue under those parameters. Otherwise, I will respectfully agree to disagree.

One response to “Yeah, Arizona Secretary of State Ken Bennett, Romney’s State Co-Chair, HAS to Be a Birther”