Is it getting this bad when a sports reporter can't ask a question in Spanish on TV and translate for viewers in English without having the ignorantes scream, "THIS IS AMERICA, SPEAK ENGLISH!!!" and expose all that is awful about this country? Such is the case of ESPN's Pedro Gómez, who asked the father of Yankees superstar Robinson Canó a (gasp) question in Spanish during the MLB's Home Run Derby tonight on TV. 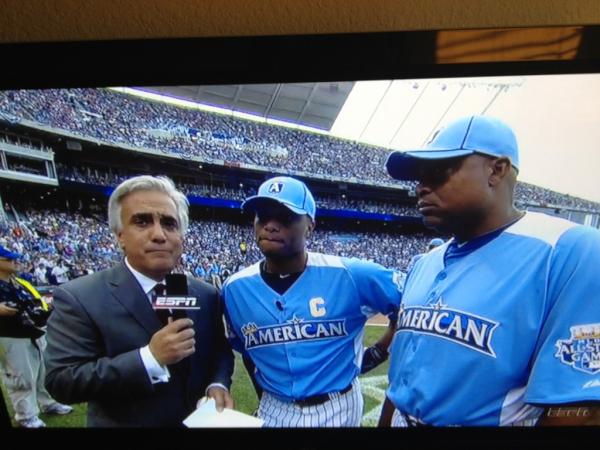 You would think that Gómez would earn some points with MLB fans for the following reasons:

However, from the looks of it on Twitter, Gómez pissed off a few of the ENGLISH ONLY advocates who insist that YOU HAVE TO SPEAK ENGLISH AND ONLY ENGLISH IN THIS COUNTRY. (Mind you, people are overlooking the fact that Gómez is bilingual and actual commands both English and Spanish at a native proficient level, which is more than we can say about some of the English native speakers who went on Twitter to express their OUTRAGE. The national pastime is dead! Bring back the baseball game we know!)

This one is one of our favorites from tonight:

At the end of this post is a Storify of other reactions. Some are just straight out nativist and of the #NoMames variety, while others are, well, actually complimentary of Gómez and of the fact that yes, beisbol is here to stay, just like baseball is here to stay as well. MLB and ESPN aren't dummies—they know that Latinos (especially Puerto Ricans, Dominicans, Cubans, Venezuelans, and yes, Mexicans, too) love baseball, so why NOT have more bilingual reporters? Hell, you might get better stories if you can ask Spanish-speakers ballplayers (like superstars David Ortiz, Canó, José Bautista, Mariano Rivera, Miguel Cabrera, Albert Pujols, etc.) a few more questions in Spanish. Just like when Jackie Robinson broke new ground in the late 40s, we think MLB will keep getting more and more bilingual and bicultural. And that is a good thing, even though there will always be some fans out there who won't get and never will. They didn't get it when Robinson was playing, and they are still not getting it now. So, gracias Pedro Gómez, por hacer una pregunta muy sencilla al señor Canó. Lo hiciste con respeto y luego pudiste compartir su respuesta en inglés para ESPN. If you need a translation of that, go to Google Translate.