We thought long and hard about NOT PUBLISHING this piece, because 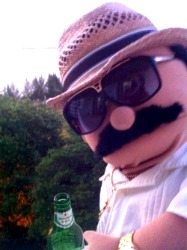 The fact is that Billete, who is basically known in the Miami area but pretty much nowhere else in the US, has every right to call himself whatever he likes. (And how can you not like how he looks? It cracks us up when we see him, like the grumpy Cuban neighbor from a bad Sesame Street episode.) But yes, it’s true, many people (including puppets) don’t like to be called Latino or Hispanic, and that is cool. Even if Billete just stuck to that part of his argument and moved on, we wouldn’t even be writing a piece about giving a puppet advice.

But… and here is the but… the problem is that Billete gets all douche-like in his defense of his opinion. In the end, he comes across as the superior elitist Cuban American puppet that only confirms that as much as we LOVE Miami and many of its residents (we have a Rebelde or two down there), there is still a small (and diminishing) assholey (is that even a word?) minority in the 305 who wouldn’t give a rat’s culo about anyone else who comes from any other Spanish-speaking country. In their world, you represent one specific point of view and belief system (very likely one that is not even shared by the majority of Cuban Americans in the US) or you don’t matter. It is superiority on steroids and it is wrong. 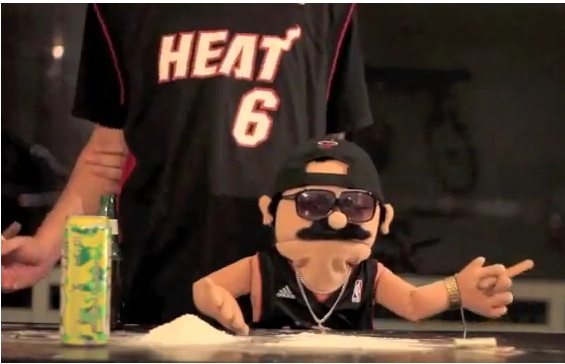 This is who Billete represents and no wonder he is popular. Only in Miami.

And for this reason, we are proud to now have Billete as the Official Puppet of our piece from last year, “Of Nuclear Bombs and Latino Disunity”.

You now have some background, so let’s share a bit of what Billete wrote.

We won’t rehash everything the puppet states in the posts (with such eloquent Spanish lines such as—“me dan ganas de meterle una pata por culo a alguin[sic]”,) but here are some of the pieces’ more lame passages:

On Why He Doesn’t Like to Be Called Latino, Hispanic or (gasp) Mexican:

The fact is that in most of the U.S., when people say “Hispanic” or “Latino,” what they really mean is “Mexican.” Yes, pipo, this is 100% the case. In Miami, one of the most culturally diverse cities in the country, we understand that there is a very big fucking difference between a Colombian and a Venezuelan, a Cuban and a Puerto Rican, an Argentine and a Uruguayan. But in most other cities, your Spanish-speaking ass is just Mexican — probably because 66 percent of the 48 million “Hispanic” people in the US are, in fact, Mexican. Pero to me, it’s still pretty fucking offensive. Cubans and Mexicans come from two very different cultures and have very different experiences here in the U.S. A mi me saca del guisio because every time I turn on the news and I hear some statistic about “Hispanics,” I know que esos comemierdas are not talking about my fucking people, coño!

His Thoughts About Being Cuban:

Now let me be clear, the intention of this article is to expose how using terms like “Hispanic” and “Latino” are inherently flawed and xenophobic, not to propagate any idea that Cubans are somehow “better” than any other group of people. Much of this prosperity and success can be attributed to the fact that Cubans don’t have the same immigration and naturalization problems that other countries do. Cubans who manage to make it to our shores are welcomed with open arms as exiles, while Mexicans and other Spanish-speaking people are denied residency and basically treated like criminals. I am fully aware that this has a huge impact on the success rate of a group of people, pero cojones, with so many significant differences between the Cuban population and the general “Hispanic” population in America, incorrectly using an umbrella term to describe these two very different groups of people is a fucking travesty!

If you are of Cuban decent, it is your duty to put a stop to this bullshit! The next time someone classifies you as anything other than Cuban American, mandalo pal coño su madre!

And it continues. You get the point.

When we tweeted out that Billete’s posts bit the big ones, his Twitter profile was quick to cut us down and mock us, as well as a few of his Brickell peeps who thought we were just a bunch of Mexicans (FYI, not all of us. See here. But we will take the “Mexican” comment as a compliment. Better than being called one of the Gusano species, which is known to just patrol the 305 and nowhere else.). So as promised to our new puppet friend, we offer a few reasons as to why the two pieces sucked bolas and a little advice:

POINT #1: Make Sure Your Marketing Is Consistent with Your Opinions About Being Latino in the US

Billete sure HATES to be called “Latino” or “Hispanic” but when it comes to marketing his brand, Billete and Escoria Films are quick to use terms they find so offensive. The following is a screen grab from their LinkedIn page. For someone who is so “offended” by the term and how the mainstream media is fleecing people, why include it four times in the first paragraph of your LinkedIn marketing bio? 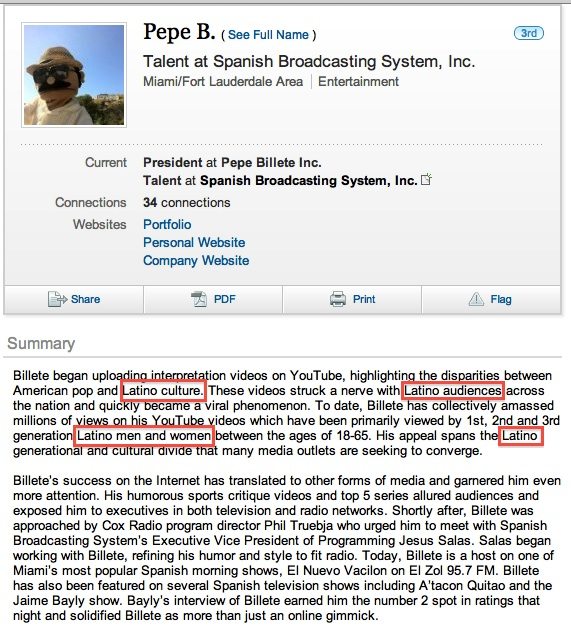 POINT #2: If You Really Want to Go National and Global, Don’t Crap on Your Target Audience (see POINT #1)

Having established that Billete is really trying to just market himself, which is fine (by the way, a quick Google search of the brand’s “viral phenomenon” is limited to just the Miami area, Billete’s YouTube views are only about 1.1 million, not “millions of views,” and dude, NO ONE is talking about you on Twitter right now, you are just talking to yourself), Billete represents the kind of Internet personality that does more to divide Latinos than unite them (AKA The Soopermexican Syndrome).

If Billete were truly smart and wanted to actually take his act to other venues besides the 305, he should be celebrating the fact that his brand could gain more attention by expanding his audience.

Instead, by taking his argument to the extreme and coming across as a selfish prick (see what our community said about his posts), he now has people scratching their heads and wondering, who is this pendejo? Granted, maybe that will get him some attention in the short term, but for all the wrong reasons. Listen to us, Billete: we love the idea of a nasty, cranky puppet, and if your were smart and savvy about your brand (and we think you are), stop crapping on other groups.

And especially stop crapping on Mexicans, As a company (us) that has seen what happens when you start producing independent content for a US Latino audience (real national coverage in outlets like The New York Times, MSNBC, Drudge, HuffPost, front page of Yahoo News with over 900,000 views on just one video), we see the value of thinking more about commonalities and less about differences.

Instead of behind “offended,” embrace the wave. You could be a megastar in all the US, and not just a local celeb in Miami. (BTW, Billete, your wrote that your blogs got mentioned in “national outlets?” We did a search and found nothing. Send us those links so we can add?).

POINT #3: Your Cuban Culo Is Still Brown to Many in the United States, Whether You Got Your Amnesty or Not

Everyone in the US Latino world knows that Cubans have gotten a better card dealt to them because of the US’ obsession with a communist regime that is only 90 miles from the US. The Cuban Adjustment of Status Act of 1966 basically gave Cubans something that no other country in the Western Hemisphere has gotten: citizenship. “The law applies to any native or citizen of Cuba who has been inspected and admitted or paroled into the United States after January 1, 1959 and has been physically present for at least one year; and is admissible to the United States for Permanent Residence.”

You would think that such a gift would be something that you didn’t have to spike the football on 46 years later, but this very vocal minority still does, and then you wonder why most every other group who is struggling with immigration finds your attitudes to be so annoying and selfish. You get amnesty, but God forbid you mention the “a word” now in a certain reactionary part of the 305.

We would invite Billete to go and start his own Vacilón show in say, Tucson or Phoenix. Now THAT would take real cojones, because out there, away from the comfort and diversity of Miami, your culo is still foreign and brown, And if you had any true courage, you would stand up for crap like this and use your humor to expose that bullshit. But you don’t because you are “offended” that people think you are “Mexican.”

POINT #4: To us, Latino and Hispanic come from Spanish and not English.

Lastly, Billete, is that your issue with the term “Latino” and “Hispanic” comes from an English language perspective. Your easily fall into the traps of these “invented” terms from the US government and feel that they don’t apply to you. (Again, like we said, that is fine, you can identify yourself any way you like, although it is ironic that by shunning “umbrella terms,” you are quick to still label yourself a “Cuban American”, but we digress.)

We, however, look at “Latino” and “Hispanic” from a Spanish language and Latin American historical perspective. We hear “Latino” and think “latinidad;” we hear “Hispanic” and think “hispanidad.” Our Latino-ness comes from many voices that have always thought of what if? What if a people who had more in common than they had differences began to think as ONE? What if?

But don’t take our word for it. And yes, this is the part of the post where we get a bit serious, and tell you that you can continue to think in your limited ways, or start thinking bigger. We could just tell you #NoMames, but instead we will let Cuba’s José Martí speak for us.

He wrote the following in Nuestra América (1881):

There can be no racial animosity, because there are no races. The theorist and feeble thinkers string together and warm over the bookshelf races which the well-disposed observer and the fair-minded traveler vainly seek in the justice of Nature where man’s universal identity springs forth from triumphant love and the turbulent hunger for life. The soul, equal and eternal, emanates from bodies of different shapes and colors. Whoever foments and spreads antagonism and hate between the races, sins against humanity.

Put the stones away, but since you are a puppet, you will very likely just fart in our face and send us to el carajo, or wherever Cuban American puppets tell people to go.

Nonetheless, if you are really serious about gaining more respect and attention outside of your little Miami playground (and maybe you aren’t), you might want to step back for a minute and ponder with that little puppet head of yours. Are you looking at the big picture? If not, it doesn’t matter to us. We will continue to be proud, proud of the fact that our company is a vibrant mix of cubanos, boricuas, chicanos, mexicanos, dominicanos, españoles, peruanos, and salvadoreños, proud of the fact that we are all Americans, and proud that we also identify ourselves as Latin@s.

Puppet show is over.