On August 12, the Caravan for Peace was launched on the Tijuana-San Diego border and it has now begun a cross-country journey across 25 cities, from Los Angeles to Washington DC. Organized by Global Exchange and Mexico’s Movement for Peace with Justice and Dignity (MPJD), the caravan is bringing the realities and tragedies of the Mexican Drug War to the United States. 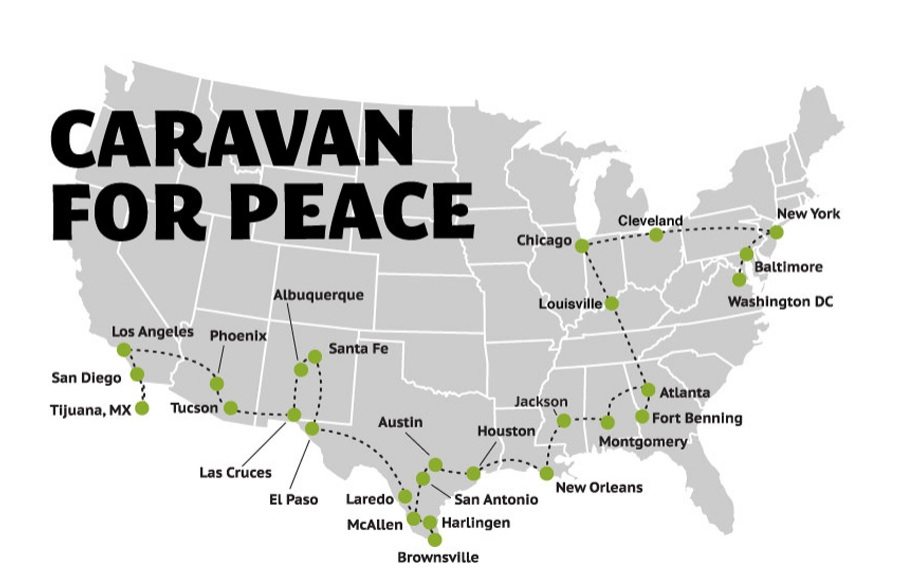 As the caravan's main site says:

More than 60,000 people have been killed in drug violence in Mexico in the last few years. 10,000 people have been disappeared and over 160,000 displaced. Global Exchange and Mexico’s Movement for Peace with Justice and Dignity (MPJD) led by Javier Sicilia have made “End the Drug War- No More Violence” campaign a priority in 2012. Starting in August, a high profile caravan will cross the US starting in San Diego/Los Angeles, heading east along the US-Mexico border and then up to Chicago, New York and DC.

Sicilia’s son, Juan Francisco was murdered along with six friends on a fateful night in March of 2011. He has since become an inspirational voice for peace, justice and reform– drawing huge crowds throughout Mexico. He comes north this summer with a call for change in the bi-national policies that have inflamed a six-year Drug War, super-empowered organized crime, corrupted Mexico’s vulnerable democracy, claimed lives and devastated human rights on both sides of the border.

2012 offers a uniquely fertile moment to internationalize the struggle for peace in Mexico. Latin American elite opinion is shifting rapidly on the question of ending drug prohibition. This call for reform has not yet echoed in the United States. The Caravan represents an unprecedented effort by Mexican civil society to impact U.S. thinking and policy.

We agree. A movement such as the Caravan for Peace is EXACTLY what this country and this world needs. As the United States public stays silent about major multinational banks admitting to money laundering from drug cartels and turns way from gun-running operations run by the US government, the time to shout out the REAL STORY of the Mexican Drug War is now.

The caravan's main site is very comprehensive. You can even "live track" the caravan's progress and check out its scheduled stops. The caravan is also posting updates on its Twitter and Facebook pages. And if you want to get involved, click here.

It is time to end the tragedy of the Mexican Drug War. Will Americans join the cause? We sure hope so.