Like we said a few days ago, imagine if BarackObama.com were taken over by Republicans or if MittRomney.com was now controlled by Democrats. In essence, that is what happened to Puerto Rican governor Luis Fortuño (a pro-statehood Republican) whose 2008 campaign site LuisFortuno.com was never renewed by his campaign and has recently become the property of Fortuño's main opposition, the island's Popular Democratic Party (PPD). 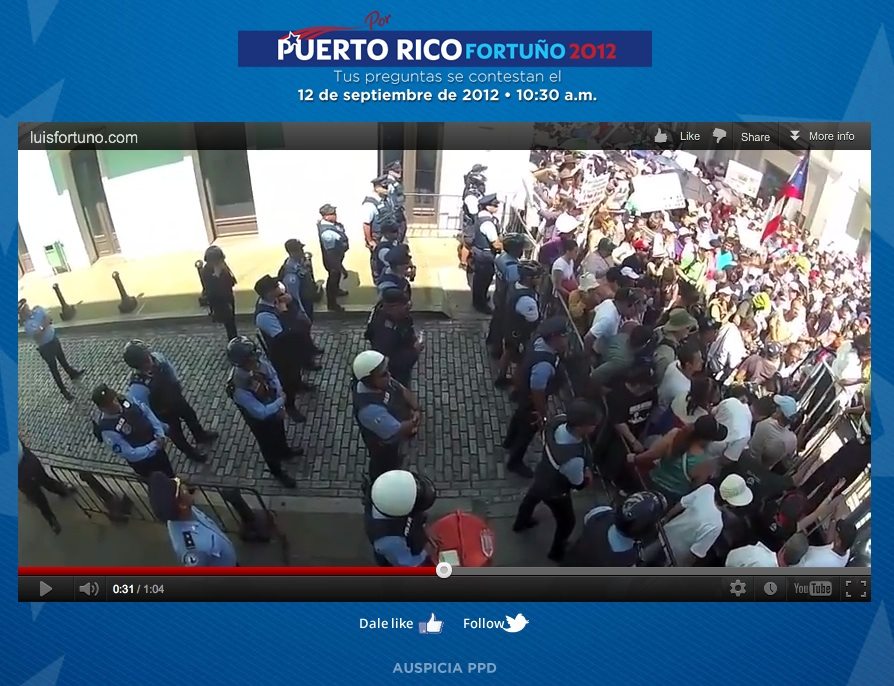 As a result, the PPD is running a very effective anti-Fortuño ad under the the governor's own name. The ad has gotten close to 20,000 views this week on YouTube.

Now, a leader of Fortuño's party, the New Progressive Party (PNP), is saying that the PPD is guilty of "cybersquatting." Here is what one outlet is reporting (translation is ours):

Sen. Melinda Romero has denounced the criminal acts of "Cybersquatting" by the Popular Democratic Party (PPD), its president Alejandro Garcia Padilla and his campaign manager Irving Faccio for the alleged theft of the Fortuño's domain name for his site.
Romero said that that there are many cases where a cease and desist has been ordered to stop using a stolen name.
"This case has no controversy because the populares have admitted to stealing the name with the intention of harming the person who owns the name," Romero said in a statement.
On Tuesday it was reported that Fortuño did not pay to renew the web domain luisfortuno.com so the populares bought and began posting messages against him.
On the other hand, Romero said that the important thing is not the use of the name but that "we are going to show how these people like to steal, lie and commit fraud. Today we are formalizing our petition to send a communication to the PPD to cease this fraud. That will be the first step before going to the ICANN (ICANN is the nonprofit organization that oversees the system of domain name registration), and then file a complaint in federal court. With this action we will demonstrate the serious consequences that of cybersquatting, if it is left unchecked. "

The PPD senator also said that she has contacted US firms that specialize in fighting cases of cybersquatting.

"As a matter of fact [these firms] have won multiple cases claiming stolen domains. Cybersquatting is the bad faith of someone to use the domain name or trademark of another person, with the intent to harm or extort money from the owner."

Although Romero's statement is clearly trying to paint the PPD as liars and cheaters (welcome to politics), the fact remains: this problem would have never existed if Fortuño paid the money to retain the rights to his domain. We're talking less than 20 bucks a year? And granted, the PPD has admitted that it does indeed own the domain name, and even if Romero sues the PPD, cases like these take time. We doubt that the site would be taken down before the November elections. Welcome to Politics 101. It's ugly out there.

Maybe Romero and her PPD colleagues should do a little more homework. Cybersquatting is annoying and it is a problem, but since the current LuisFortuno.com site is not asking for money, it will be a stretch. A quick Google search about how to avoid cybersquatting reveals some additional information. Here is just one example:

Can [cybersquatting] really happen? Is this legal?

Yes, it can and does happen everyday.

Depending on the situation, site owners may have legal recourse (e.g. trademark infringement lawsuits or arbitration). However, even when a cybersquatter is breaking the law, it can be time-consuming and expensive for a site owner to win a legal judgment, especially if the cybersquatter is located in a different country. In some circumstances, it is possible to reclaim names through domain arbitration, however this can cost thousands and can take many months. Full-blown domain-related lawsuits can take years and cost tens of thousands of dollars. The easiest (and cheapest) way to prevent most cybersquatting is to register a few basic variations of your company name before the damage is done.

Meanwhile, the PPD continues to rub it in. For example, the PPD's official Twitter account shared the following receipt that shows how much it cost them to renew LuisFortuno.com:

Even if Fortuño and the PPD initiate a cease and desist order on the site, it appears that it might take some time. And with less than 50 days left until the election, by the time Fortuño get his domain name back, it might be too late.