In essence, the Yahoo! sports piece that Kevin Kaduk wrote this evening about Toronto Blue Jay shortstop Yunel Escobar is spot on accurate. The screen shot from the piece clearly shows the eye black on Escobar's face say "Tu ere maricón," which is a gay slur in places like Cuba (where Escobar was born), the Dominican Republic, and Puerto Rico. (It is grammatically correct to say "Tú eres" in Spanish and the eye black says "Tu ere.")

According to the Yahoo! story, a tweet by @james_in_to  showed Escobar wearing his eye black and yup, there is no other way to hide what the text says: 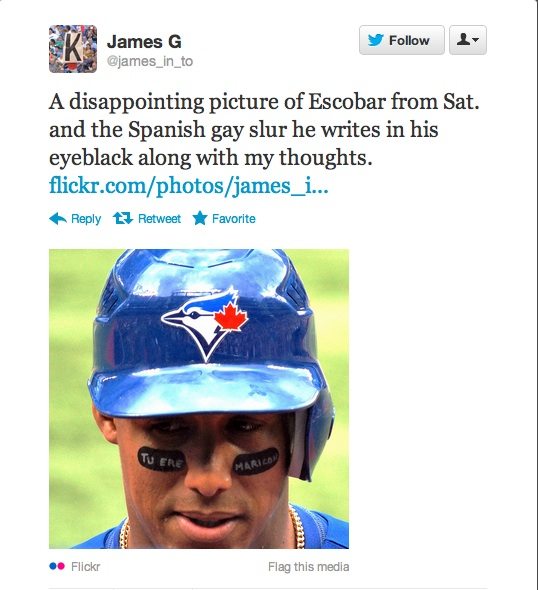 And even though Kaduk's story says that Escobar is known to write on his eye black (saying that he has written the word "CHILLING" previously), the fact remains: there is a gay slur in Spanish that can be seen by others. Was Escobar tricked? Did he do it himself? Or did someone who didn't know Spanish ("Tu ere" vs. "Tú eres) write it instead of Escobar? Who knows for sure. Nonetheless, MLB is going to investigate this, as reported by ESPN.com's Jerry Crasnick: 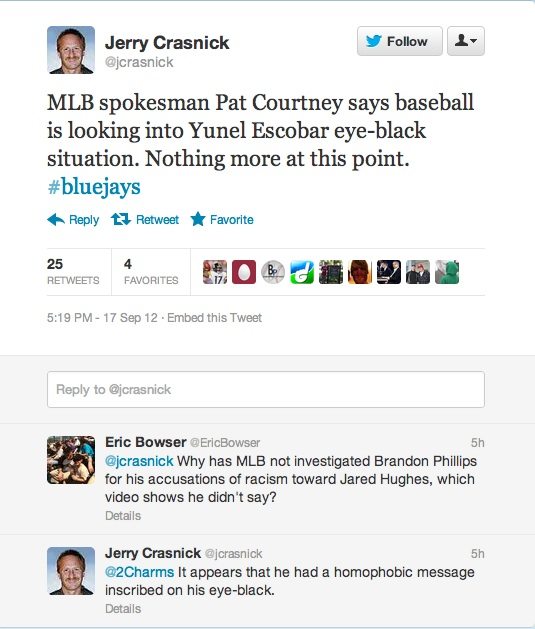 (H/T to Twitter friend @DignityPeace for sharing the Yahoo! link with us.)