Last week, we were one of many pages to report how the Kennedy Center once again ignored worthy Latino candidates in choosing its list of 2012 Kennedy Center Honors recipients. Along with several Latino media sites, the story was also covered by national outlets such as NPS, POLITICO, The Los Angeles Times, and The Washington Post. Unfortunately, one of the sad consequences of the news led to Kennedy Center President Michael Kaiser telling Felix Sanchez of the National Hispanic Foundation for the Arts to go and "f•ck" himself.

Even after the Post published a follow-up story where Kaiser went on record to defend himself from the insinuation that he was a "racist," it appears that Kaiser's remarks to the Post are nowhere close to an apology a group of 30 national Latino organizations are demanding that he make. 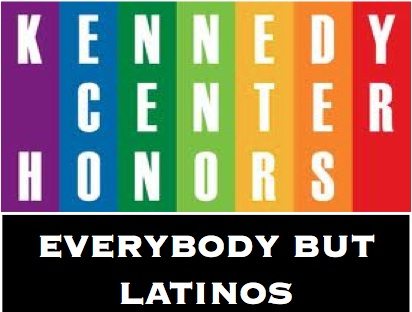 POLITICO ran it's own follow-up story yesterday, where it chronicles what groups such as the NHFA, the National Hispanic Leadership Agenda (NHLA), the National Council of La Raza (NCLR) are saying:

A coalition of 30 national Latino organizations is calling on Kennedy Center President Michael Kaiser to apologize for cursing at Felix Sanchez, the National Hispanic Foundation for the Arts chairman, after the nonprofit criticized the Kennedy Center Honors for not recognizing more Latinos.

“There is no excuse for Mr. Kaiser’s outburst and it should not and cannot be tolerated,” states National Council of La Raza President and CEO Janet Murguia. “He profoundly disrespected our colleague Felix Sanchez and the Latino community, a community that merits inclusion and fairness, not insults, when it comes to one of the nation’s highest cultural honors. At the very least, Kaiser owes Mr. Sanchez and our community a sincere apology and it is our hope that the Kennedy Center will take disciplinary action in light of such unacceptable behavior.”

Even though POLITICO could not get comments from any of the principals at The Kennedy Center, the story did include quotes from actor Jimmy Smits, one of NHFA's founders:

Actor Jimmy Smits, one of the founders of the National Hispanic Foundation for the Arts, tells POLITICO that, upon hearing the news of the phone call between Kaiser and Sanchez, he was disappointed, but not surprised.

”It’s kind of a shame that we have to be on the record as to whether we support a diverse America, but that’s essentially the question,” said Smits. “NHFA and NHLA are put in a position where they have to call out the powers that be at the Kennedy Center because for 35 years, they have clearly blocked Latino artists from their rightful inclusion and recognition. I applaud NHFA and the 18 national Latino organizations for their courage to speak truth to power.”

For Smits, the current situation at the Kennedy Center reaches into the White House as well.

”The last thing you want is for the president and the first lady to find themselves presiding over an event that is locking out Latinos. You can’t leave that decision up to the producer, the White House and the board have to be involved in the final selection of these honorees. You do not want these awards to embarrass either the president or the Kennedy family again.”