Legends of the Darkroom

Spending a day with Latino visionary James “Koe” Rodriguez is like hanging out with your older primo. He’s always dressed fresh-to-death and you’re immediately submerged into the feeling that even though he’s only a few years older, he’s already lived two lifetimes ahead and is in the midst of conquering yet a third. 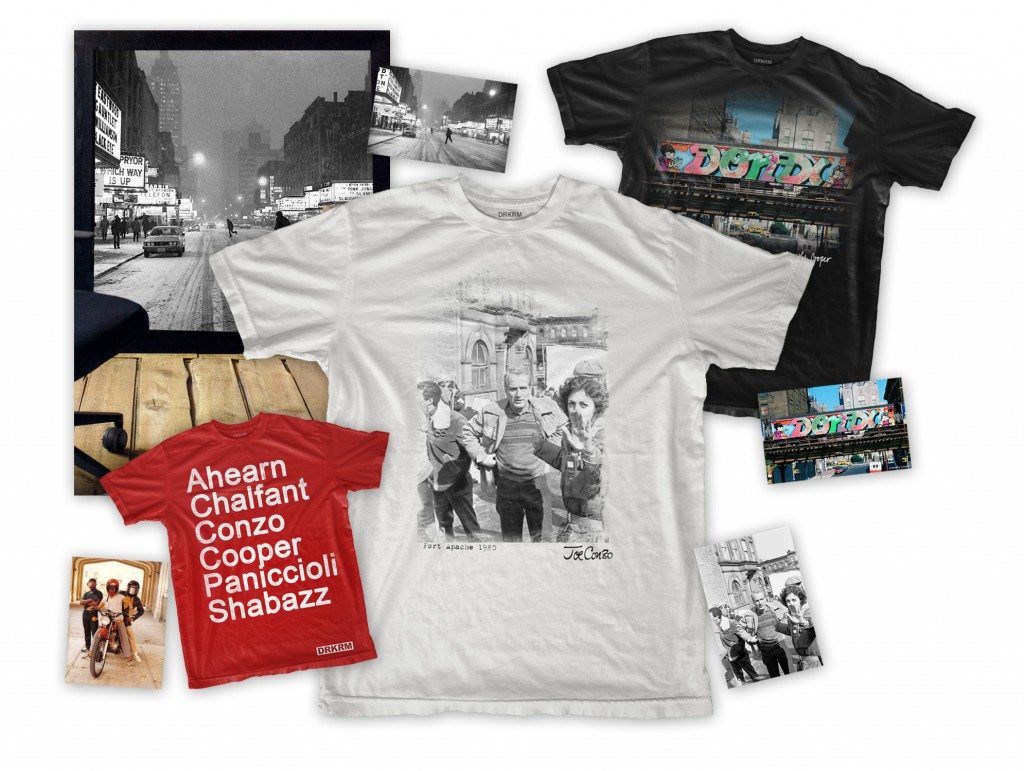 Koe has clearly spent the greater part of his life living on the cutting-edge of a cultural movement that has seen neighborhood trends grow to international fashions.

And with this week’s official launch of lifestyle brand DRKRM, Koe and partner Dan Sears of the Czar Agency will merge nostalgia with the here and now via the world renowned imagery of legendary photographers Martha Cooper, Jamel Shabazz and Joe Conzo Jr.

With an ever expanding knowledge of all things popular culture has created and documented over the past thirty years, coupled with his wide network of trusted, A-List clientele, Koe has been placed in the favorable position of bringing classic photographic imagery to life on everything from t-shirts, wall paper, to the kitchen table you’re sipping your Café Bustelo on while reading this.

And if Koe has it his way, many of the professional thirty, forty and fifty-something’s who grew up immersed in a  movement of artistic creativity birthed on the streets of New York, will now be able to own exclusive apparel and home goods, designed with the intent of placing us all back in our essence.

When I spoke to Koe about the iconic Dondi graffiti image gracing the front of one of Martha Cooper’s DRKRM tees, he stated, “Martha has never allowed anyone but us to commercially use that image, and that means a lot to us.  The fact that she has entrusted me to use one of her most endeared photos and a truly iconic Hip Hop image to present to the world along the same lines as a classic rock t-shirt –-think Led Zeppelin or the Stones– is an honor – Especially since Dondi is no longer here and this shirt will allow his art and memory to live on in a whole other form.”

For anyone who’s been hiding under a rock for the last thirty plus years, it was Martha Cooper and Henry Chalfant who first captured the artistic expression of the streets, known as graffiti, and published it in a bestselling book titled, Subway Art; allowing urban art to grow into a global movement that continues to this day.

Subway Art celebrated its 25th Anniversary in 2009, and DRKRM’s exclusive Martha Cooper collection utilizes her timeless imagery to bring us all closer to a very cool place and time in urban cultures history.

While Cooper was capturing the moving art canvasses on New York subway trains – famed photographer Jamel Shabazz was in Brooklyn capturing life exactly as it existed for all who called Jay Z’s birthplace home in the 70’s, 80’s and up to present day.

With now classic images of b-boys with boom boxes and street cats with dirt bikes, Shabazz managed to move through neighborhoods most wouldn’t dare venture into for fear of catching a Brooklyn beat-down, or quite possibly death as the crack epidemic took hold devastating entire communities.

A few of Shabazz’s books, Back in the Days and A Time Before Crack, now serve as some of the only photographic documentation of what Brooklyn once was prior to the gentrification of the neighborhoods and the Brooklyn Nets moving in.

DRKRM’s unique photographic collections lend a great deal to capturing that old school essence and showing your pride. And the next time someone screams, “Is Brooklyn in the house?” You won’t even have to reply if you’re rocking one of DRKRM’s exclusive Shabazz tees.

Rounding out the powerhouse trio representing the first collective of photographers is Joe Conzo Jr., of Born in the Bronx fame.

For those not familiar with Conzo’s work – His vast collection of early Hip Hop photography earned him the title, “The man who took Hip-Hop’s baby pictures,” in a NY Times piece in 2005.

With Joe’s new DRKRM collection, Rodriguez brings to life a rare Conzo photograph of actor Paul Newman seeming none to pleased to be having his picture taken while shooting Fort Apache in the South Bronx in 1980.

It was a movie that would go on to spawn protests from the predominantly Latino and African American community for its portrayal of minorities as savages – Protests led by Conzo’s own grandmother Evelina Lopez-Antonetty, known as the “Hell Lady of the Bronx,” for her legendary activism.

With images encompassing Hip Hop and the Salsa movement of the 70’s and 80’s, only time will tell how many of Conzo’s classic photographs will make it into our homes via the Darkroom Legends collection. We can only hope the exclusivity of this new line won’t keep us from owning some of our favorites.

When I asked Koe to summarize the DRKRM brand for his target audience, he stated, “Our goal is to create a really cool lifestyle brand that salutes unique visual art, past and present. It’s about time for those who create popular culture to be more in control of how it’s utilized and monetized, even if it’s just a t-shirt or a piece of wall art.”

Today, Koe’s entrepreneurial spirit can be seen if you walk into certain Applebee’s restaurants in the Bronx, Harlem and Brooklyn – where he has helped broker deals to have the wall’s custom themes incorporate iconic imagery from Conzo, Shabazz and even original works by aerosol artists such as the world famous TATS CRU. 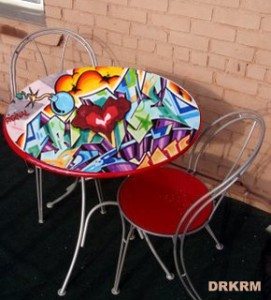 Tomorrow, sky’s truly the limit for a visionary who understands that our past certainly connects us all to our present and our future.

I look forward to seeing what Koe and team have to offer the world next – And with the creation of an apparel and home goods line and with original film and TV projects all in the works, I have no doubt this team will continue to surprise and inspire us with their vision of what a colorful world should look like.

And in my own nostalgic words, “That’s just too damn fresh to ignore.”

One response to “Legends of the Darkroom”