Editor's Note: Last month, one of the Rebeldes caught rock and roll legends ZZ TOP at New Jersey's Count Basie Theater for like the 100th time in his life. Here is the review from an early October show.

It’s difficult to write something new about ZZ Top (members Billy Gibbons, Dusty Hill, and Frank Beard), but when the opening riff from “Heard it on the X” began, my mind started wandering. It was the fifth song in their set at New Jersey’s Count Basie Theater. They opened up with the Sam & Dave cover, “I Thank You,” moved on to "Waiting for The Bus/Jesus Just Left Chicago," and then my ya-ya got penetrated with "Pincushion."  Even tough it was let off their set, they band began to plan “X,” a song about the outlaw Mexican radio of their youth. 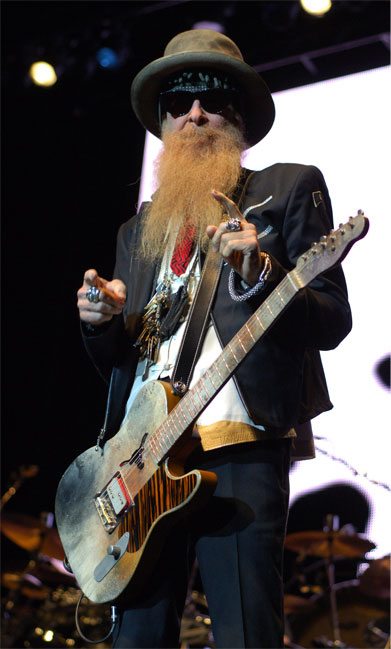 ZZ Top has long had a respect for the frontera culture and its various charms. They have nine albums with Mexican reference in the titles, and the song "Mescalero" is sung entirely in Spanish.

On the same "Mescalero" album, you will find several uses of tejano sounds (accordion, harmonica, marimba), and during that tour Billy even used a pair of Mexican throwing knives, which he stuck in a custom-built guitar while playing "The Shiv" live. A true salute to frontera culture, style, sound, creativity and sarcasm… Yes, it is safe to say that ZZ Top has a definite respect and understanding of the frontera world.

So yes, maybe, I’m having difficulty writing something new about this ZZ Top show. 43 years together gives them a lot of hits to play (Not just "Legs," "Tush," or "LaGrange"). They have a new album (La Futura) that grinds you into your seat and rocks a new take on a rap song: "25 Lighters."
ZZ Top still has its sense of humor… never lacking in double entendres. Its in the nods to themselves between songs and the casual banter to the crowd that you realize how good this band really is. They never stop touring. Their last album was in 2003. So to find a new angle I took my sister (whose idea of rock is Billy Joel), who let out a shout when Billy said… “Same 3 guys… 4 decades… same 3 chords!”

One response to “43 Year Later, ZZ Top Keeps Rocking On”