After facing a Twitter firestorm from conservative outlets like Drudge, Breitbart and the Washington Examiner for retweeting a vulgar tweet that called Mitt Romney a "misogynistic/racist twat," actress/activist and Obama for America campaign co-chairman Eva Longoria took to her social networks today to issue an apology and clarify her intentions.

According to the HuffPost's Latino Voices, Longoria issued the following apology early this afternoon: 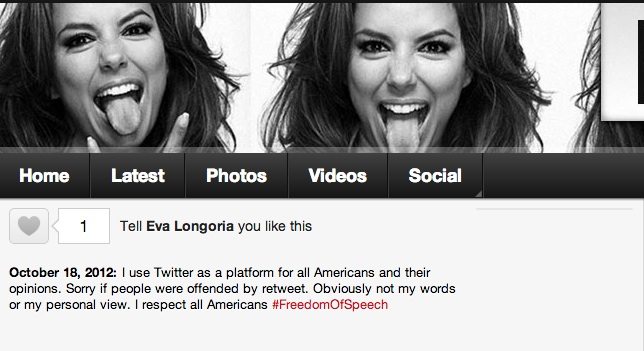 The apology referred to a retweet that Longoria shared with her 4.4 million+ followers during the debate between Romney and President Obama. She later deleted the following tweet from her timeline:

This is the second time that Longoria got caught in the RT frenzy that happens during debates. Last week, she had RT'd a tweet that called Congressman Paul Ryan the "prison bitch" of Vice President Joe Biden. Like we said in all our posts, people are entitled to their opinions, but it becomes a slippery slope when you are a campaign co-chair for President Obama and might overlook the fact that one's influence and reach is being monitored by many outlets who are just waiting to pounce on you. It is safe to say that Twitter monitoring has become its own media industry.

Public discourse, especially when it applies to people working for any presidential campaign, is something that we should all strive for, on both sides of the aisle. When in doubt, it is always best to pause and think before one tweets or retweets.

In the meantime, Longoria's Twitter feed right now has gone into social media damage control and her profile is sharing tweets that support her apology and her actions. At one point one tweet suggested that Twitter was acting up this morning, but Longoria was quick to say that she was having issues with the service this morning and not during the debate. Here are just a few examples of what she has tweeted today (sources: @EvaLongoria, Tmi.me, and WhoSayWho.com): 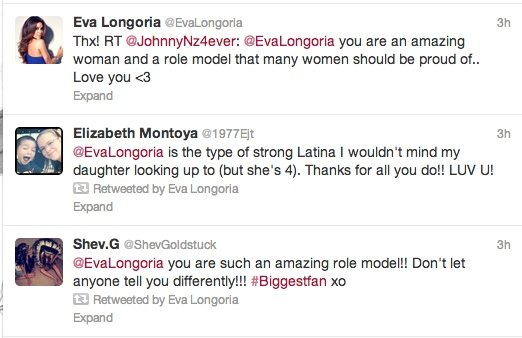 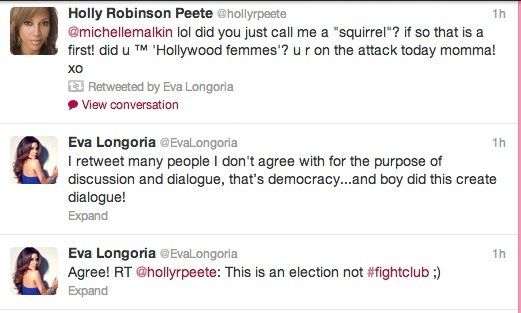 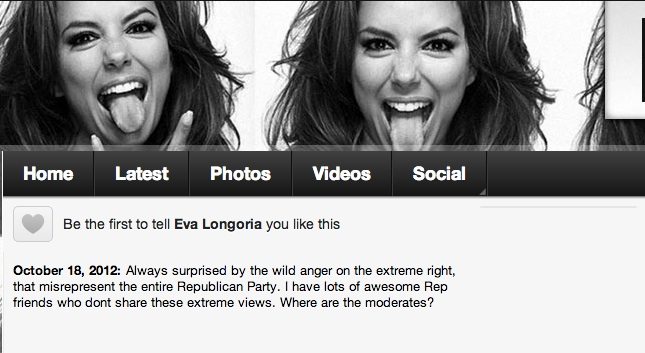 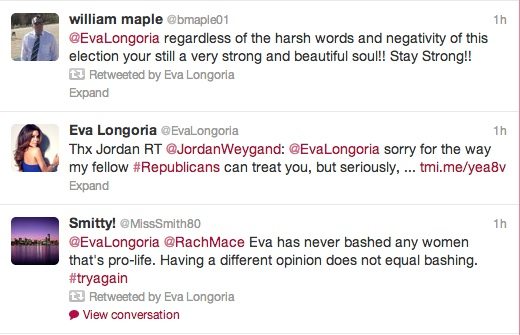 The issue is not about free speech or the right to express an opinion or what platform you use to express an opinion. The issue has always been the following: social media has become an extension of all of us. When you have millions of people following you, stepping back and asking yourself, "would I say this if I were speaking publicly in front of an audience?" before you click SEND is always wise to do. Sometimes learning what NOT to tweet is just as important as what you WANT to Tweet, because in the end, Twitter is one dangerous place at worst. Or just one big high school at best.

The forum that Twitter has created gives us the power to connect and interact with anyone in the world, but all tweets have consequences (believe us, we know). And those consequences will get amplified f you are an official part of a political campaign that is basically lives on social media every day as well. We do agree with Longoria that this is a good issue to discuss. Social media should makes us better in what we do every day. The easy thing is to do just stay divided. The harder thing is to learn from this, swallow a little pride, learn from this, and move on. We have moved on, and we leave you with the famous words from our of favorite TV shows ever: