The Rebirth of GROWING UP GONZALES

As the curtains draw open tonight at the Poets Den Theater in El Barrio, New York City – the spotlight will unquestionably shine brightly on Luis Antonio Ramos, one of the most talented Latino actors to grace the stage and screen over the past 30 years. 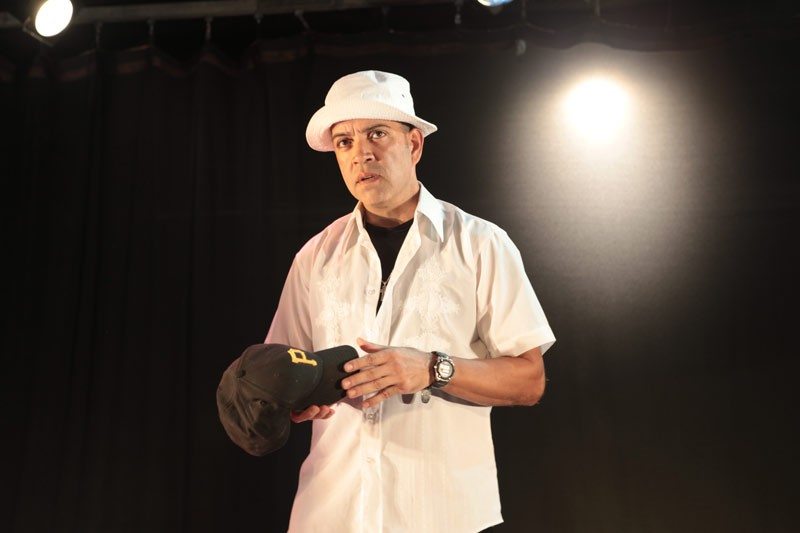 Growing up Gonzales, the one-man play written by Felix Rojas, 2012 Hola Award Winner for Outstanding Achievement in Play-Writing, returns to the stage tonight. And after several successful runs, the show is making its comeback with a new look, a fresh perspective and a new lead actor in Ramos, as well as a new director, Candido Tirado, who has over 30 years experience in theater.

Tonight will mark the culmination of these three creatively talented Latinos coming together with the common goal of inspiring the audience. And though they’ve each traveled different paths to get here, their life experiences have certainly prepared them for this very moment – a moment to bring Rojas’ vision to life on stage with the purpose of helping the audience realize how precious familial relationships are in the short time we’re allotted in this world.

Robert Brault once wrote, “Alas, by the time Fate caught up with my life, Chance had it all planned…”

There is fate, chance, change, destiny, dreams, and purpose and then there is life and the direction our lives will automatically take us as our responsibilities become the priority over our creative aspirations.

The balance of creative artist and father has undoubtedly sidelined the works of untold talents the likes of which we may never hear from again – A similar fate which almost sidelined Rojas’ writing career forever.

After spending the 80’s and 90’s working as a playwright in theater. Rojas would eventually land with a theater company called, La Familia, who brought productions to prisons to inspire the prisoners with true tales of a life that they could relate to.

Having the unique ability to write something that others can relate to and become encouraged by is the definition of what a talented storyteller embodies. 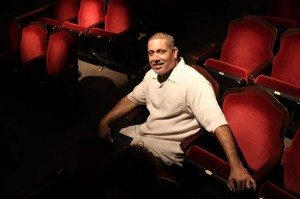 Rojas expressed to me that his first love was writing. But the challenges of having to manage all roles to see his plays come to life, didn’t allow enough time to fulfill his passion of writing.

“At that time we had to wear many hats. I wasn’t being recognized. There was no support for Latino plays and I eventually just lost the desire to continue,” He stated to me by phone.

And after the artistic director of La Familia passed away, Rojas would eventually fade from the entertainment business becoming discouraged and deciding it was time to focus on a newly bourgeoning familia of his own.

Rojas would eventually move his family to Fishkill, NY and let his first love of writing fade into a distant memory.

I might not be writing this article today had it not been for the happenstance of one of his sons discovering his work. After reading it his son asked why he’d stopped writing, something he realized he didn’t have an answer for.

“The next morning I had a new icon on my desktop. It was a script writing program that my son loaded for me,” said Rojas.

It was the rebirth of Rojas writing again and it spawned several plays being written including Growing up Gonzales.

The rest is as they say, is history…

Tirado first met Rojas in 1986 when he was directing a play titled, First Class, at the Puerto Rican Traveling Theater.

Never realizing at the time that they’d come together again 26 years later to bring Rojas’ words to life – Tirado was brought in after Luis Antonio Ramos agreed to take on the role only if there was a new director to avoid emulating the previous success of the show.

While everyone I spoke to shared a sincere appreciation for what the past actors and directors brought to the table, they wanted to be afforded the opportunity to bring their own life experiences and creative talents into the show’s most current run.

In speaking to Tirado only for a brief time I quickly came to admire not only his more than thirty years of theater experience, but more so his deeply rooted passion to bring empowering theater to the audience.

Tirado reminds me of a 60’s activist who knows there is positive change to be had if we demand it. He spoke to me about the control of society utilizing entertainment content that keeps us uniformed and uninspired, playing an integral part of our failure to progress forward.

Think Love & Hip Hop, Basketball Wives, and every other reality show that teaches us it’s best to throw punches first as a form of conflict resolution.

“How do you control lower class people, you give them movies and television. You control them with the thoughts they put into the messages on TV and movies. How do you control the upper-class in theater, you give them a message about the disintegration of humanity. When they leave the theater they feel that the world sucks anyway, and I’m doing well, so I’ll cut a small check for charity. They feel no other obligation to really get involved or do more to change society because they feel it’s hopeless,” Tirado vehemently stated.

He went onto speak to me about his belief that if you empower your audience through a rich theater experience, especially the upper-class, that they might then feel empowered to become engaged in our struggle and actually use some of their money, power and influence to bring about significant and lasting change. 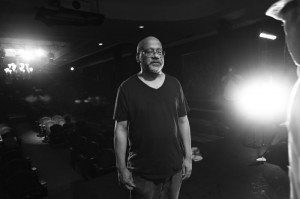 Tirado expressed his concerns that American theater hadn’t yet broadened its horizons into opening the doors for plays that empower and educate, which is precisely why he feels the natural draw to work on plays such as Growing up Gonzales – A play that shows the spirit of a character finding the truest meaning of life through loss and reflection.

In directing Ramos through rehearsals, Tirado stated, “Luis Antonio is amazing. He is so well-trained and I can see his training bringing this play to another level of success. He makes my job as a director easy.”

In keeping with the essence of bringing hopeful theater to the audience, Tirado promises that this production will be a complete theatrical experience in which you’re going to laugh, cry and revisit your relationships, especially those in which separation has become a part of your life through no fault of your own.

An activist in theater – I never would’ve guessed it.

At the end of our discussion, Tirado and I left off in agreement that in the entertainment business it’s very rarely about how good you are, a candid Tirado simply stated, “That’s bullshit,” when discussing the age old argument that if you’re good enough you’ll make it.

We were both in agreement that Latinos should continue to pull others up with them, as we fight to obtain and acquire positions of power in entertainment.

Only then will we have the power of the content.

Over the next 4 weeks the audience in the Poets Den Theater will be introduced to not only one of Latinos most well-trained actors, but also one of its most humble human beings.

Actor Luis Antonio Ramos, recipient of the José Ferrer HOLA Tespis Award in 2009, has a resume that dates back over 30 years, with a memorable introduction to pop-culture in Spike Lee’s 1986 cult-classic Do the Right Thing.

My first introduction to Ramos happened about five years ago after a mutual friend, Casper Martinez, gave him a copy of my memoir, Next Stop.

I’d written about the untimely passing of Joseph “Joey Kidd” Padro, losing his life over eggs being thrown on Halloween – And later found out he was a childhood friend of Luis Antonio when he read the book.

He called me one morning from LA to tell me he’d take me to meet Padro’s mother in person next time he was in New York. Allowing me the opportunity to express my condolences and let her know I’d only use her sons story to help others teens avoid the same fate.

It was a promise he kept – and I’m honored that we’ve been friends ever since.

As Ramos began to tell me why this play is so important to him, I began to understand that through this experience my friend would be able to do some healing of his own.

It was life imitating art or in this case art imitating life.

Ramos explained to me that the play at its heart was about what happens when we lose someone that is important to us. And how in digging deep we’re able to change the relationship we had with them, even after their death.

Understanding that he’d lost some people very close to him over the last few years I asked him if he used that pain to bring these characters to life.

He responded by saying, “I had to conquer my own fear. I knew if I committed to this play I’d be forced to dig into my own pains and my own loss throughout the last few years. Things that as a very private person I’ve kept to myself.”

He continued to share with me his feelings about the writing Felix has done calling it, “Genius.”

“It is so timely in regards to educating us on how to heal properly. We’re in a time and space where so many of us are losing our parents, some are losing siblings and we don’t always have the time to heal properly. This writing is genius in that it allows us to explore and look into what is right in regards to taking the proper time to heal and to have remembrance over those we’ve lost along the way…” stated Ramos. 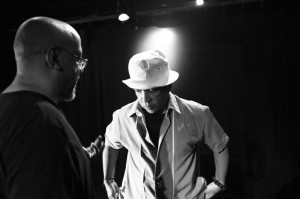 During our call he went on to share that same love for his new director Tirado, stating, “I’ve given myself completely over to him and it’s been a pitcher – catcher relationship ever since. I’ve thrown everything that I can at him and I trust him to catch my worst pitches allowing us to win the game.”

As a lifelong Yankee fan – I’d expect no other analogy from my good friend.

With this opportunity Ramos has been given the chance to surrender to his emotions while utilizing all of the training he’s had over his lifetime.

He feels this is the prelude to having the courage and strength to share his own story, which is what he’ll be seriously exploring next – something I’ve actually been waiting for since I met him and learned of his struggles and triumphs.

I can only imagine how powerful his performance in this production will be. But knowing what I know of his character and professionalism – I have no doubts this will be something special to witness firsthand.

This journey that Rojas, Tirado and Ramos are preparing to embark on is one that will certainly raise the level of stories being shared by Latinos.

Rojas summed up the journey best when he stated, “Life is short – Love the people who love you because they won’t be around forever…”

A great deal of inspiration born from the son’s love of a fathers work.

Special thanks and appreciation to Raphael Benavides for having the belief to open his theater and produce Growing up Gonzales.

3 responses to “The Rebirth of GROWING UP GONZALES”