Yesterday, our founder wrote an opinion piece about Pedro Rios, a Republican candidate for California's State Assembly who is facing a controversy in his district when it was revealed in the local Bakersfield press that was smuggled into the United States from Mexico as an undocumented youth. Rios, a beneficiary of President Reagan's 1986 amnesty law, became an American citizen in 1996, but he has expressed his opposition to the DREAM Act, saying that he does not believe in handing out "crumbs" to DREAMers.

As an American citizen who used to be undocumented, Rios has lived a very successful life, serving in the military, becoming a teacher and then a small-business owner. He is a testament to what could happen to undocumented youth when given a boost and a chance. Now Rios, as he enters the last few days of his campaign, is defending his anti-DREAM Act positions, even though his official bio overlooks his undocumented past and his official site does not include any public positions about immigration.

Over the past few hours, Rios has publicly posted his views in a thread from his own public Facebook site. After we followed up with our own comments and provided several questions that we requested that he answer, the thread was deleted from his Facebook page.

Here are screen captures of the thread, where Rios (or whoever is running his account) clarifies his positions. We submitted several questions as a follow up, and after that, the thread was gone. 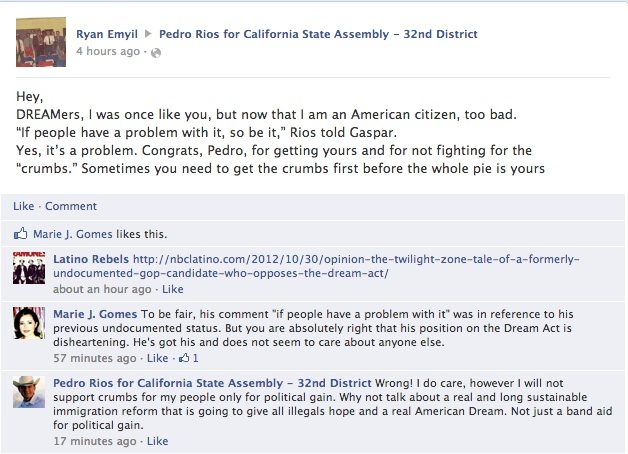 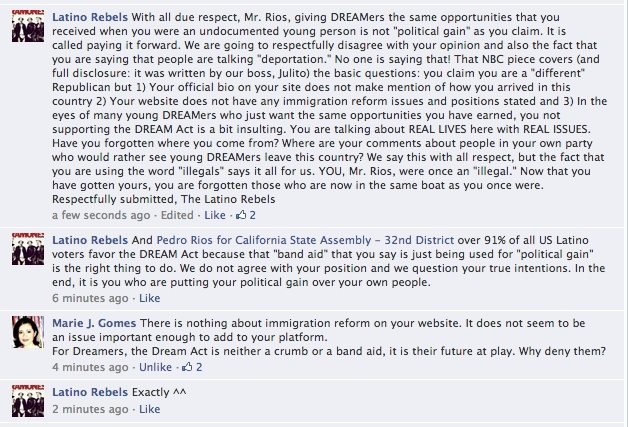 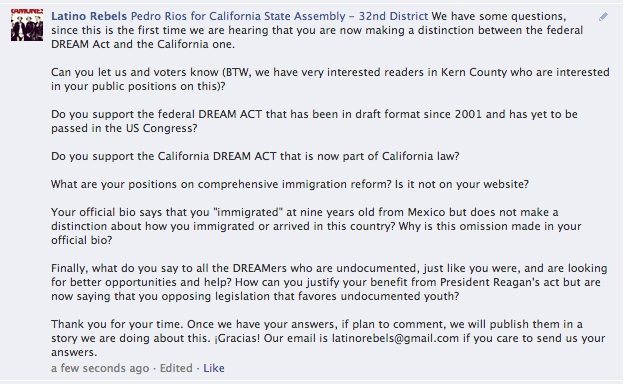 We are hoping that Rios takes the time to answer our questions, and yes, we are of the position that his views are quite insulting to undocumented youth, especially since he was once an undocumented youth. Is Rios now claiming that opportunities for young DREAMers don't matter? We do hope he takes the time to answer our questions or clarify his positions. As someone who was once a DREAMer, you would think he understands the key issue here, and why a true leader would never forget where he came from.