The Perils of “Latino” Marketing: Lessons Learned from the “Los IceHogs” Hockey Night

Before you jump to conclusions—which some people associated with the "Los IceHogs" November 16 event being promoted by the American Hockey League's Rockford IceHogs said I had done already—my NBC Latino piece about the event did not say that the people behind the now Internet-famous IceHog in a sombrero with garish jersey accompanied by Corona maracas and Dora the Explorer poster were racist. In writing my opinion piece (and that is all it was, an opinion), I spent time talking with the IceHogs' management team as well as a member of Rockford's Coalition of Latino Leaders, who was a key group in the idea behind the "Los IceHogs" event. They are all good people who are professionals in what they do, and I never called them racists. 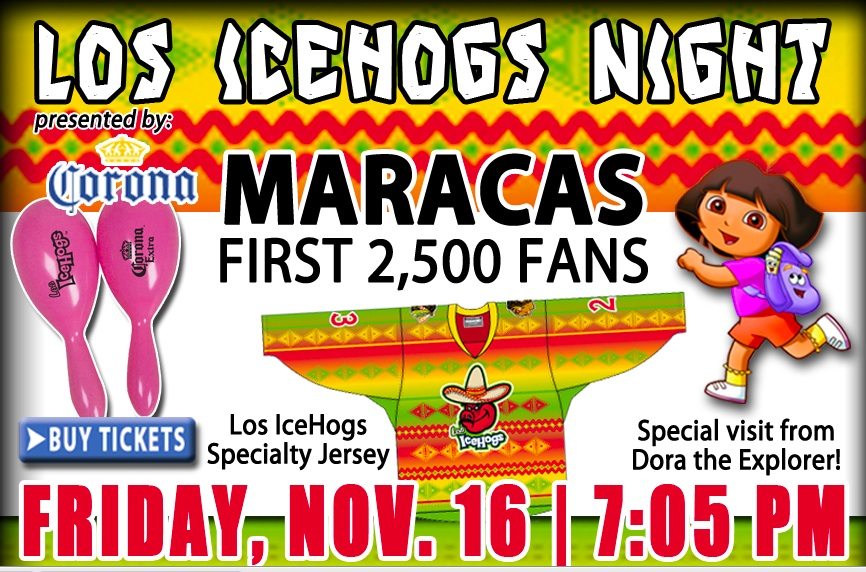 What I did let them know in all my on-the-record talks with them was that the jersey and the promotional poster when tweeted and shared online with very little context were seen by me and many others as offensive and racist. I understand that was not their intent, but the team did admit that creating something controversial would elicit attention, both good and bad. I also get the fact that the team and the CLL want to diversify hockey attendance at IceHogs games, and having more Latinos attend games is a noble idea. Since the Rockford team is owned by the community, their hearts might have been in the right place, but some of their major marketing decisions were clearly misguided. The execution of the jersey and the poster failed, in my opinion, and to expect that some people would not speak out and later claim that we were being overly sensitive about their decisions adds nothing to the dialogue. 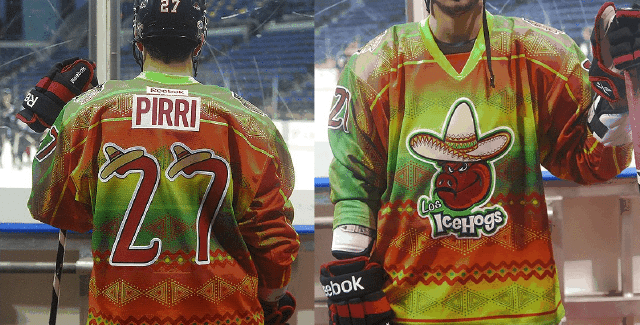 Instead, the last few days have been a lesson for the IceHogs and I will give them the credit to understanding the issue and for partially acting on it. So as the team prepares for the "Los Ice Hogs" event, they should be commended for actually sharing more details about the event. Their latest release made public on their site reveals some very positive and authentic efforts to the night that speak to a better approach. Here are just some of the highlights of the night, which also includes a tribute to Latino veterans:

Following the event, four of the game-worn uniforms will also be put up for auction on the IceHogs eBay store, with a portion of the proceeds being donated to La Voz Latina, an organization dedicated to serving the Rockford region’s Hispanic community through education, workshops and youth programming.

Local band, Aires de Guamajuato will perform after pregame warm-ups, during both intermissions and briefly after the game. Also throughout the game on Friday, goals and penalties will be read in Spanish, in addition to Public Address Announcer Chris Toltzman’s announcements of the game.

In addition, several regional Hispanic groups will be on-site to distribute information to attendees about their organization.

These are all good things, even though I still think that the jersey is a fail and as well as the original poster, which is still the first image people see when they go to the IceHogs site is still being displayed (but without the Dora the Explorer image because Nickelodeon prohibits the Dora image next to alcholic brands). In the end, the IceHogs are still promoting the event with problematic images and stereotypes. Ideally, the jersey shouldn't even be worn tomorrow night, but I know that won't happen. Nonetheless, the team would have benefited more if the event's initial promotional materials included the more positive aspects of the night.

It still makes me feel uneasy that the team achieved its marketing goals by creating controversy at the expense of offensive images. Yet the question remains: will the IceHogs use the night to promote the community authentically or just lapse into stale stereotype? The jury is still out until tomorrow night.

When talking with the IceHogs and the CLL spokesperson, I was told that many professional sports team also hold similar Latino nights. That is true, and you would think that they should have used those nights as a model. For example, last year I took my son to CitiField for a Latino night at a New York Mets game. I thought that the Mets did a fairly admirable job with its promotion: the Jose Reyes' flags reminded me of the flags you would see at a soccer game in Latin America and the segments devoted to different Latin American countries were well-planned and presented some very interesting information. The Mets also celebrated how beisbol is so engrained in the cultures of countries like the Dominican Republic, Venezuela, Puerto Rico and even Mexico. It just felt right. There were no people dressed in sarapes and shaking maracas, which I think will happen tomorrow night in Rockford, and it will look silly. At the Mets' night, there was a respect to heritage and tradition. That is why it worked. 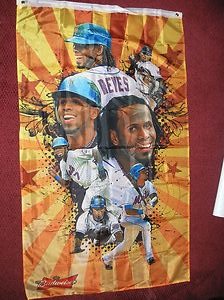 Also, I don't buy another argument that is being presented: well, other teams do it too and we are just following the trend. That argument and logic doesn't really apply here.  Other leagues and teams have their issues with Latino Nights. And don't get me started about what the Los Locos section at Minnesota Timberwolves' games has done in the past. All I am asking is that more respect is given when brands try to get all "Latino" on us.

Another thing that the IceHogs learned this week was that people are more connected online, and by not presenting the full context of their intentions at the very begriming of a promotional event (a tweet showing off the IceHogs jersey is not the way to go in the online world these days), you run the risk of looking badly in the eyes of people. Social media is not a local format. It is public, global, and context matters, especially when you are making a first impression.

As for the CLL? I know they do great things for the community (see the video below), but I also think that there is inconsistency in their messaging. If the Rebeldes' crime was calling them out for pushing for a jersey design that borders on cultural racism, then arrest us. The CLL should be open to some feedback. You are all about being positive for the community except for when you want to promote insensitive images? Was Speedy Gonzales not available? How can you push for advancements in the community in everything else that you do but then help to design a jersey that is seen by many online as mocking the Latino community? "Getting over it" doesn't lead to a resolution, it only tries to justify a mistake.

And in the end, that it is all that it was: a mistake. No one is racist and no one is wrong. We all have opinions and we must respect them, even though we don't agree with them. I have no doubt that a more diverse crowd will show up tomorrow night in Rockford. I just hope it is for the right reasons.

Now if the IceHogs ever want to do this night again, let's just hope they seriously consider other jersey designs and promotional items. After getting to know them this week, I think they learned from their first attempt and be better for it.

Julio (Julito) Ricardo Varela (@julito77 on Twitter) founded LatinoRebels.com (part of Latino Rebels, LLC) in May, 2011 and proceeded to open it up to about 20 like-minded Rebeldes. His personal blog, juliorvarela.com, has been active since 2008 and is widely read in Puerto Rico and beyond. He pens columns on LR regularly. This year, Julito represented the Rebeldes on CBS' Face the Nation, NPR,  Univision, Forbes, and The New York Times.

10 responses to “The Perils of “Latino” Marketing: Lessons Learned from the “Los IceHogs” Hockey Night”