#ICEFail: Another Home of Arizona DREAMer Gets Raided

Just a week after a highly publicized story about the home raid of Arizona DREAMer activist Erika Andiola went viral, another incident involving yet another DREAMer has occurred. According to a petition by DreamActivist.org, Edi Arma has been detained: 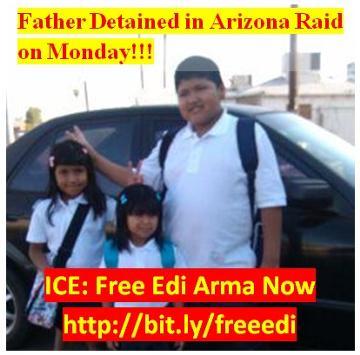 I write to ask for the immediate release of Edi Arma, (A#089-815-011) currently being imprisoned at the Eloy immigration prison. Edi is being threatened with immediate deportation despite being a perfect candidate for discretion as outlined by John Morton, the Director of ICE.

Edi was first detained by ICE in 2009 after a neighbor called the police saying he looked “suspicious.” The police pulled him over and immediately began to grill him as to his legal status, the asked him if he had proper papers to be in the United States. Edi was honest and told them he did not; he was immediately turned over to ICE agents.

Edi has since been fighting his deportation to Guatemala, a country he left 12-years ago. Edi has three children; ages 11, 8 and 6. His 6-year old daughter suffers from asthma and recently had to be hospitalized. In 2009 Edi’s brother was murdered in Guatemala and, if deported, he fears the same fate.

On Monday, January 14th, 2013, Edi woke up just like any day and got ready to take his 3-kids to school. As soon as he opened the door he was attacked by sever ICE agents. He was arrested in front of his entire family and told he’d be deported soon. Edi’s 11-year old son attempted to hug his father goodbye, however the ICE agent pushed him away.

Edi’s entire family has been shaken by this raid and they fear Edi’s immediate removal. Edi is currently being detained at the Eloy immigration prison and is being told he will be deported any day now.

There is a demonstration scheduled for later this afternoon in Phoenix. Once we get more updates, we will share on this post.

2 responses to “#ICEFail: Another Home of Arizona DREAMer Gets Raided”