THIS JUST IN FROM OUR FRIENDS AT MAMIVERSE

Mamiverse is thrilled to announce an upcoming Twitter-Talk with Emmy award-winning journalist Jorge Ramos. Currently the anchor of Noticiero Univision, Ramos joins Mamiverse, along with partners Latino Rebels and iHispano, to talk about the new edition of his book, A Country for All: An Immigrant Manifesto. In it, Ramos addresses the urgent need for Immigration Reform, and why Latinos are the key to making America’s future a bright one.

“I’m excited about this event and truly connecting with Mamiverse families to talk about my book and the role immigration has on the future of the United States,” said Jorge Ramos from his office in Miami. “This nation needs to have a serious discussion about immigration reform. Millions of lives hang in the balance. Now is the moment to ensure everyone, Latino or not, knows the facts about this important debate.”

The date of the Jorge Ramos/Mamiverse Twitter-Talk is set to take place the day after President Obama delivers his States of the Union address, the first of his now second term. Having publicly stated that immigration reform is a priority his administration, the Twitter-Talk will enable discourse and reactions on the President’s speech and how Latinos can get involved in the debate. 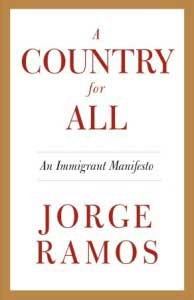 SUBJECT OF #COUNTRYFORALL TWITTER TALK
Since the signing of Arizona’s infamous SB1070, few topics have stoked more passionate debates than those surrounding our nation’s immigration policy. Inhumane, cruel, un-American, such are the words used to describe what everyone agrees is a broken system. Now, with Congress back in session and President Obama in the early days of his second term, Jorge Ramos outlines a clear argument for why the time to act is now, and why Latinos are the key to keeping America great.

WHO:
Organized by Mamiverse & Jorge Ramos, in conjunction with Latino Rebels; iHispano, the leading Latino job board company in the nation, will also be supporting the event through their proprietary network channels

GIVEAWAYS:
Ten signed copies of Jorge Ramos’ Country for All: An Immigrant Manifesto

ABOUT JORGE RAMOS
Jorge Ramos is one of the most celebrated journalists in the U.S., and was recently named to TIME magazine’s list of 25 Most Influential Hispanics in the United States. The Wall Street Journal refers to him as “Hispanic TV’s No. 1 correspondent.” A journalist since the 1980s, he has interviewed every sitting U.S. president since George Bush, Sr., and countless politicians, elected officials and newsmakers in the U.S. and abroad.

Mamiverse is honored to share the Twitter stage with this distinguished journalist and leading voice of Hispanic America. It’s a party you don’t want to miss!