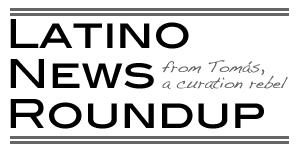 There are 18 million U.S. Hispanics on Facebook. Approximately 7 million of them are Spanish-dominant while 11 million are bilingual or English-dominant. :: read more at www.portada-online.com

Walker says the money from the Wisconsin Economic Development Corp. would help expand the revolving loan fund at the Hispanic Chamber of Commerce. WEDC made an initial seed investment of $100,000 in 2012 to help establish the loan program. :: read more at host.madison.com

Cuban-born playwright, journalist, and poet Dolores Prida, whose candid, humored, and often mordant columns about the most pressing social and political issues constituted one of the staples of Latino media, died of cardiac failure on January 20. :: read more at nbclatino.com

Hispanics for the first time will become California’s largest ethnic group by the end of the year, according to a report on California’s shifting demographics contained in Gov. Jerry Brown’s (D) 2013-14 budget proposal :: read more at www.huffingtonpost.com

The Obama administration has granted deferred action to 154,404 young undocumented immigrants, including more than 50,000 in the past month, according to data released on Friday by the Department of Homeland Security. :: read more at www.huffingtonpost.com

“Many immigrants are here by themselves,” says Morales, noting that Latina immigrant women are drawn to Islam because of the sense of “belonging” they find within the Muslim community. “When they come into the mosque and see smiling faces, they feel welcome.” :: read more at newamericamedia.org

Are Businesses Hesitant to Connect With Hispanic Consumers?

At my boutique advertising agency in Austin, Tex., I see lots of opportunities for businesses to set themselves apart and pick up some market share by reaching out. But I am often puzzled by the number of retail and professional service businesses that pass up these opportunities. :: read more at boss.blogs.nytimes.com

For Latinas, who are born if a culture steeped in high regard for children and family, the option to decide for themselves whether or not to have children has always been a decision made with the utmost conscience. Termination of a pregnancy is not made lightly by Latinas but for those who live below the poverty line and know that any kind of social help to them is limited, if not banned, the decision to terminate seems more humane than to bring a child into the world who cannot be cared for, fed or loved properly. :: read more at latinalista.com

Others may be making a list and checking it twice, but LatinoStories.Com is proud to say that it has the longest tradition of picking top ten Latino authors in the U.S. :: read more at latinalista.com

From first Latina in space, to head of the Johnson Space Center – Dr. Ellen Ochoa

This month, Dr. Ellen Ochoa, a four-time astronaut and the first Latina to go to space, launched into the next era of her stellar career. She became the first Hispanic and second female director of NASA’s Johnson Space Center (JSC). :: read more at nbclatino.com

Hilda Solis – Beginnings and Endings: My Journey of Public Service

It has been an honor to be your secretary of labor. Today, as I prepared to say farewell, I decided that I wanted to share my experience through journeys, and through beginnings and endings, because that reflects what’s in my mind, and more importantly, what is in my heart at this present moment. :: read more at social.dol.gov

According to the report done by the National Center for Education Statistics, Hispanic students graduated at a rate of 71 percent in 2010. That is a striking jump from 2006, when the rate was 61 percent. :: read more at latino.foxnews.com

Former Miami-Dade County Mayor Carlos Alvarez, ousted from office in the largest recall vote of a local official in U.S. history, is now a bodybuilding champion. :: read more at latino.foxnews.com

Henry Muñoz III, a San Antonio, Texas, native and Obama’s bundler during last year’s presidential campaign, said in an exclusive interview with Fox News Latino that his appointment to the DNC post is part of a great effort among his party to diversify its ranks. :: read more at latino.foxnews.com

Sources are reporting that the Colombian superstar has given birth to their first baby boy, Milan Piqué Mebarak. According to Sport.es and multiple sources, Shaki gave birth via cesarean at the Teknon Hospital, located in Barcelona, Spain. :: read more at www.latina.com

The University of Arizona is using popular musical genre Hip Hop as a way of exploring cultural boundaries. The new academic minor delves into how Latino religion, Latino and black history have influenced and shaped Hip Hop in the U.S. :: read more at latino.foxnews.com

New Book: Juan in a Hundred: The Representation of Latinos on Network News by Otto Santa Ana

Author of the acclaimed Brown Tide Rising: Metaphors of Latinos in Contemporary American Public Discourse, Otto Santa Ana has completed a comprehensive analysis of this situation, blending quantitative research with semiotic readings and ultimately applying cognitive science and humanist theory to explain the repercussions of this marginal, negative coverage. :: read more at www.literanista.net

here is my non-fiction list of films coming down the pipeline, bound to make an impression and impact this year. Two are profiles of influential iconic American activists whose work and spirit have left indelible marks on their generation. :: read more at www.latinheat.com

Princesa is a young Argentinian rapper/Tito “El Bambino” Fan Club President with a real affinity for island rhythms and fitted hats. “Pa Ke Mueva” is her latest single, and it’s f’ing amazing. Like “Danza Kuduro” but with balls. :: read more at www.clubfonograma.com

What wonderful Latin music can we hope for in 2013? Beat Latino takes a peek at its crystal ball and sees we are in for some marvelous surprises. :: read more at beatlatino.com

Culled for these HispanicTips’ Reports