The Lull Before the Storm

The prospects for comprehensive immigration reform have never looked brighter. After 71% of Latinos voted to re-elect Barack Obama, a stunned Republican party saw the consequences of pandering to its xenophobic fringe during the Republican primaries and the general election. In the wake of this demoralizing defeat, some GOP leaders have publicly reconsidered their hardline stance on immigration reform. Still, the chances of getting an immigration reform bill through Congress are far from certain. A host of immigration restrictionists are waiting in the wings, marshaling their forces, ready to pounce on any new legislation. 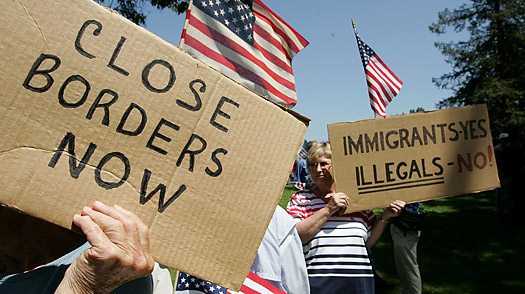 Well-funded nativist organizations like Numbers USA, ALIPAC and others are seizing the talk of immigration reform as an opportunity to further fatten their coffers, feverishly exhorting donations for their fight against any new legislation. And fight they will. Their very existence is at stake.

There will be no room for compromise with the nativist lobby. Even the watered-down immigration reform proposals of Republican Senator Marco Rubio are already being called “amnesty.” So you can expect any Democratic-sponsored bill to be a non-starter. The hit list of Republican congressional members who reach across the aisle and support immigration reform is being drawn up by the restrictionists. Those who break ranks can expect to feel their fury.  Moreover, the restrictionists are doing more than playing defense.

Rep. Steven King (R-Iowa) has introduced the “Birthright Citizenship Act” that would overturn the 14th Amendment’s guarantee that a child born in the USA is a citizen, dredging up the false specter of undocumented immigrants seeking to live on the U.S. dole through their “anchor babies.” Numbers USA has even gone so far as to suggest illegal immigration is primarily responsible for the historic water shortages of the U.S. Southwest.

With such vehement opposition in the works, is there any chance to pass an immigration reform bill this year? That will depend on how its supporters frame the debate. The cornerstone argument against immigration reform will be: “Secure the borders first, then we can talk about what to do with the undocumented.” The nativist lobby is already preparing an offensive that claims the Border Patrol only intercepts 61% of border crossers and other statistical smokescreens. Ironically, the U.S. border with Mexico has never been more secure.

In January 2013, the nonpartisan Migration Policy Institute released a comprehensive report that concluded: “Today there is no net new illegal immigration from Mexico for the first time in 40 years.” The study cites increased border security along with the economic recession as factors in the decline. What’s more, the study goes on to say: “The US government spends more on its immigration enforcement agencies than on all its other principal criminal federal law enforcement agencies combined.” Indeed, while Republicans continue to hammer Obama for being soft on immigration enforcement, he has actually deported 1.5 times more people on average per month than his GOP predecessor, George W. Bush. The difference is that the Obama administration has focused deportations on the undocumented with criminal records, not those simply doing honest work.

The goal of the immigration restrictionists will be to stoke fear and inflame passions. Supporters of immigration reform must be armed with the facts on border security and debunk the myths that will be used to oppose this much-needed legislation. Can immigration reform succeed? Sí se puede – Yes, we can. But only if we are prepared for a prolonged legislative struggle and are ready to counter distortions with facts.

Raul Ramos y Sanchez is the award-winning author of the novels AMERICA LIBRE, HOUSE DIVIDED and PANCHO LAND. He is also host and editor of MyImmigrationStory.com. For more information visit www.RaulRamos.com.

One response to “The Lull Before the Storm”