Earlier this week, several outlets, including NBC News, The New York Times, and The Miami Herald, reported about the undetermined FBI investigation of Dr. Salomon Melgen, a top Democratic donor with deep ties to New Jersey Senator Bob Menendez and a Latino community leader who founded the Miami-based VOXXI news site. As details continue to trickle in about the story, from unconfirmed allegations of underage Dominican prostitutes initially reported by The Daily Caller, to after-the-fact personal reimbursements of $58,500 from Menendez to Melgen for private jet trips to the Dominican Republic, and recent charges of possible influence peddling, we reached out to VOXXI on Wednesday for comment. This evening we received the following statement from company spokesperson Julissa Bonfante:

VOXXI is an independent news site dedicated to covering the issues that are most important to the Latino community. We pride ourselves in our objective quality journalism that educates, engages, and entertains Hispanic America. Our news platform provides comprehensive coverage on sports, business, education, politics and more.

VOXXI’s co-founder, President and Editor-in-Chief, Emilio C. Sánchez manages the company and is the head of the editorial department. Dr. Melgen co-founded VOXXI as a philanthropic initiative.

With respect to Dr. Melgen’s case, we will not comment on an ongoing investigation. The source is anonymous and we continue to follow it closely. Given that is an open investigation, we are waiting for the FBI’s formal announcement.

As reported by Breitbart, Sánchez said that our initial request for a VOXXI statement about its founder’s FBI investigation was “not true.” Our request was made on Wednesday, and we have been in communication with VOXXI since then. The VOXXI page lists Melgen as the company’s Chairman and Founder, and not as a Co-Founder. Sánchez is listed as the company’s President and Editorial Director, yet the page also says the following: “National Latino leader and philanthropist, Dr. Salomon Melgen and renowned journalist and editor, Emilio C. Sánchez founded VOXXI in August 2011.”

The following screen shot from the same page on VOXXI’s site lists Melgen as the company’s Chairman and Founder: 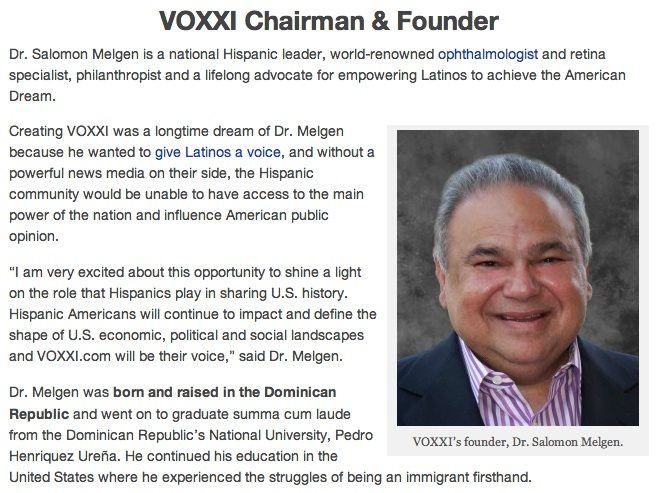 In addition, Breitbart reported that VOXXI has yet to cover the story and details surrounding its Founder (or Co-Founder):

Melgen’s personal media company has ignored the story, something a VOXXI spokeswoman told Breitbart News has been a decision made by leadership. “It was an editorial decision,” [Bonfante] said when asked why the outlet didn’t cover it.