Talk about taking the fight right to the core. 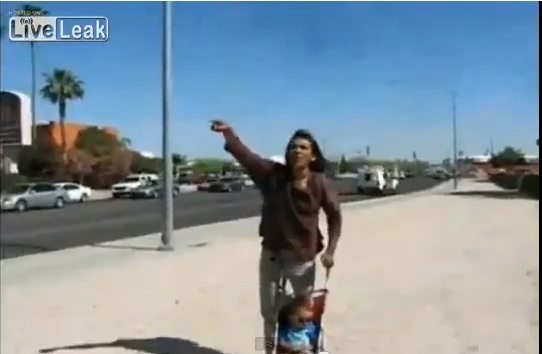 The following video (and its different variations and sources) has gone viral on the Internet.

Here is what Latino Voices reported:

“You are all fucking illegal! You’re all illegal,” screamed the unidentified man to the rally demonstrators in a recent YouTube video. “We didn’t invite none of you here. We’re the only native Americans here.”

Appealing to the history of Europeans appropriating native lands after arriving to the new world, the man kept challenging the group who, with insignias and American flags, started to dissipate one by one until the area was cleared.

“Get on with your bogus arguments. We’re the only legal ones here,” he said referring to the Native American community, many of who are also of Central American descent. “Yeah, we should have put that sign up when you son of a bitches came. That represents blood spilled by Native Americans protecting this land from the invaders!” he said while pushing a stroller with a child.

The protestors mostly ignored the man though some responded by informing him that they too were of Native American descent, and yet others simply suggested he’d had too much to drink.