This just in from Florida Atlantic University through OwlAccess.com (h/t to @JuanSaaa for tweeting it to us and also to Deadspin): 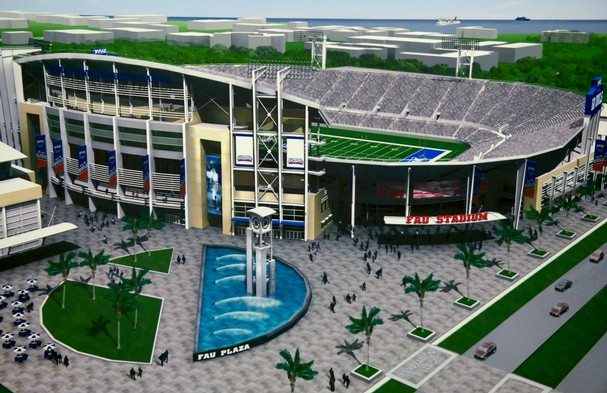 A 2009 rendering of the new FAU stadium

Florida Atlantic is expected on Tuesday to finalize a deal with The GEO Group that includes naming rights for the football stadium, sources have told OwlAccess.com.

The deal is believed to be valued at around $5 million, though the term of the contract is not yet known.

The GEO Group is a leader in privatizing correctional facilities. Its CEO, George Zoley, holds bachelor’s and master’s degrees from FAU. He has served as a member of FAU’s Board of Trustees and was at one point the Board’s chairman.

The GEO Group is headquartered in Boca Raton. Its a building visible from I-95 across from FAU’s campus.

In December FAU completed its second year in the Owls’ new on-campus football stadium that seats nearly 30,000. FAU has been working on securing naming rights to the stadium since before it opened and had been close on at least one occasion.

The deal will be formally announced at Tuesday morning’s Board of Trustees meeting.

Established in 1984, the GEO Group operates facilities in North America, Australia, Africa and Europe. According to its web site, The GEO Group manages correctional facilities, designs facilities and manages inmates, among other services.

Maybe FAU should look at these two videos before inking the deal?