A recent spike in publishing projects by avant-garde Puerto Rican writers and presses has caught the attention of some stateside industry professionals and Luis Negrón’s “Mundo Cruel” may just be the icebreaker that will hopefully reveal a largely unknown community of excellent writers and poets to mainland readers—that is, to English-dominant Latinos and other lovers of stories. Language can be a staunch obstacle, but with the aid of translator Suzanne Jill Levine, Luis Negrón’s stories about survival, heartbreak, obsession, love and hope have come to breathtaking life in English from their previous Spanish-only incarnations.

“Mundo Cruel” is a collection of 9 short stories that function like diverse facets looking into life in contemporary Puerto Rico, in Santurce specifically (where the author resides). In “The Chosen One” Negrón sketches an anguish-laden account of a young gay man’s turmoil, as being raised by an abusive and religious father and the ironic connection between matters of the spirit and sexuality—not to mention hypocrisy and secrecy. “The Vampire of Moca” examines jealousy and obsession in the context of a gay crush and made us laugh aloud quite a few times. 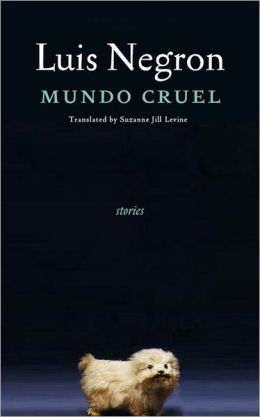 “For Guayama” is a terrific study in dark humor: a man’s dog becomes ill and dies and he relentlessly tries to track down a friend who owes him money, so that he can have the dog’s body sent to a trendy taxidermist for preservation. “La Edwin” takes another look at interpersonal politics in San Juan’s gay community, presented as a gossipy telephone call made by the narrator. And “Junito” takes a tender turn, where a former bully tries to convince a gay man (Junito) that he should leave the island for a better life as he himself has decided to do—partially to protect his effeminate son. Tables turned.

“Mundo Cruel” descends into darker storytelling that we won’t indulge you with here, as this mysteriously slim volume (don’t judge a book by its width) packs a mightier emotional punch than most books three times its size. Luis Negrón is a very gifted storyteller, and one who is not afraid to steer straight into shameful and hurtful memories at top speed, confessing them with no fear or need of pity. “Mundo Cruel” will make you laugh and will make you cringe—but what would life be without its ups and downs?